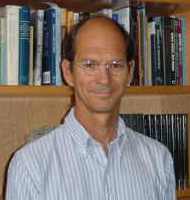 UC Berkeley political scientist Robert Powell has been awarded the National Academy of Sciences (NAS) Award for Behavioral Research Relevant to the Prevention of Nuclear War.

The award, announced today (Thursday, Jan. 19), recognizes basic research in cognitive or behavioral science that uses rigorous formal and empirical methods to advance understanding of issues around the risk of nuclear war.

Powell is being saluted for his development of sophisticated game theory models of conflict that shine light on the strategic dilemmas of nuclear deterrence.

His 1990 book, “Nuclear Deterrence Theory,” specifically examined nuclear threats.  In his 1999 book, “In the Shadow of Power: States and Strategies in International Politics,” Powell lays out models that enable more precise analysis of the ways that a state can respond to threats.

“Nuclear deterrence theory is about trying to understand how political conflicts of interest play out in the shadow of nuclear weapons,” said Powell. “I hope that a better understanding of this process makes nuclear conflict at least a little less likely; sometimes I think it just makes one more depressed.”

Currently, he is analyzing the role of military balance in nuclear brinkmanship.

An authority on game theory approaches to international and political conflict, Powell joined the UC Berkeley faculty in 1990.

Powell said he is “pleased, honored, and surprised” to receive the award.