By: by Kate Rix, College of Letters and Science

In the early 1990s, Berkeley ethnomusicologist Ben Brinner traveled to Israel and the West Bank to study the lives of Palestinian musicians. When he had lived there in the 1980s he had heard complaints that their paid performances were limited to playing Arab pop music at weddings.

"To satisfy their audiences they were forced to learn songs they didn't value, and there was very little opportunity to play music that they did value," recalls Brinner. "Initially I set out to document that."

But to his surprise, what Brinner ended up witnessing a decade later was the coalescing of an altogether new musical scene - a creative response by both Palestinian and Israeli musicians to the musical and political circumstances of their region.

Between 1993, when the Oslo Peace Accords were signed and Prime Minister Yitzhak Rabin's assassination in 1995, there was a brief but fruitful period of hopefulness, a tentative optimism that political solutions to the region's tumult might be within reach. The feeling inspired Palestinian musicians frustrated by limited audiences and performance opportunities - as well as a few Israeli Jewish musicians who became interested in combining Arab music with their own eclectic mix of styles, including jazz, bluegrass, and classical music.

In his newly published book, Playing Across a Divide (2009, Oxford University Press), Brinner chronicles the experiences of musical groups that found innovative ways to fuse disparate musical styles and, perhaps even more challenging, to rehearse and perform together, not just during the brief period of mid-nineties optimism, but even later, as suicide bombings and assassinations led to restricted travel both between Israel and the West Bank and into other countries.

"These groups really saw their fortunes rise and fall with every political turn," Brinner says. In the book, Brinner, who is chair of Berkeley's Music Department, follows the bands Bustan Abraham and Alei Hazayit from their creation and throughout their careers, as well as the collaborative projects of Israeli artist Yair Dalal. 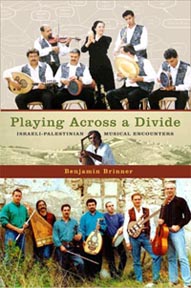 The group Alei Hazayit, whose Hebrew name means "olive leaves," was founded by Shoham Einav, a Jewish female vocalist, who wanted Middle Eastern-sounding accompaniment for the Israeli folk songs and Ladino ballads she was singing. She also added a few Arab songs to her repertoire, believing that "peace might be achieved through mutual understanding." Shoham went in search of the right musical partner and found Palestinian drummer Jamal Sa'id.

Shoham and Jamal couldn't have been more different from one another. Shoham, a retired nurse in her late 40s, lived with her cardiologist husband in one of Jerusalem's wealthiest neighborhoods. Jamal, nearly 20 years younger, lived with his wife, six children and one grandchild in a two-room stone house in the Old City district. Both musicians wanted to challenge themselves musically, bringing together in one program Hebrew folk songs, Ladino ballads and Arabic songs. The band included both Israeli citizens and Palestinian members from the West Bank.

"This band most explicitly confronted the socio-political obstacles to peaceful, meaningful collaboration between Israelis and Palestinians," Brinner says. "In spite of border closures that would prevent band members from getting together for rehearsals or gigs, they held together for 12 years."

The band Bustan Abraham started up the same year as Alei Hazayit. The Israeli organizers, a Jew and an Arab, reached out to their musical contacts and put together an extremely successful group that stayed together for almost a decade. The band featured top-notch musicians, young Israeli men, both Arabs and Jews who gathered to play original instrumental compositions. The guiding principle behind the band was to find the best, most compatible musicians willing to embark on musical exploration, with a clear preference for Arab and Turkish musical idioms. A mix of Jews and Arabs was a dividend of this process of selection, not a determining factor.

"They performed their own compositions almost exclusively," Brinner says. "Together, they developed a new musical language."

Many of the musicians Brinner interviewed mentioned the rise of fusion and World Music as major influences, especially the group Shakti, whose primary members were British guitarist John McLaughlin and Indian musicians, violinist L. Shankar and Zakir Hussain on tabla.

"The rise of World Music as a viable marketing category got a lot of musicians interested in high-profile fusion experiments," he says.

As a[n ethno] musicologist Brinner specializes in Middle Eastern music as well as the gamelan music of Java and Bali. In both of those Indonesian islands he has studied the ways that musicians interact based on their extensive shared culture. In Israel his focus was also on interaction between musicians, but in a radically different setting.

Brinner analyzed the ways all of these musicians found each other and connected with sponsors, audiences and record companies. One of the most important results of the years when these bands were together has been the creation of new cultural connections.

"Although the particular bands I followed have ceased to exist, there is far more interaction between Jewish and Arab musicians today than when I began this research," he says. New bands have formed as a result.

Previously, musicians might get together for occasional performances of music that promotes peace, but which isn't particularly innovative musically. But the work of the bands he studied broke barriers, Brinner says, by drawing from a wide range of musical traditions.

A few of the Jewish musicians involved in these collaborations were already well-versed in Arab, Turkish or Persian music. Others were attracted to the drumming and ways of improvising that distinguish Arab music from Euro-American musical practices. The Arab musicians were interested in experimenting with the new challenges of harmony and counterpoint or new melodic and rhythmic ideas. Interestingly, traditional Jewish music plays a small role in some of these collaborations and is entirely absent from others.

Playing together presented many challenges and risks. For bands that involved musicians living in the West Bank, military closures and roadblocks, and the need for permits to enter Israel, presented major hindrances to gathering for rehearsals and performances. Yair Dalal, for instance, stopped collaborating with two musicians from Jericho because it became virtually impossible to get together.

Yet in spite of danger and inconvenience, the musicians in Bustan Abraham and Alei Hazayit repeatedly made the effort to get together and appear in public.

Alei Hazayit percussionist Jamal Sa'id told Brinner that performing with Alei Hazayit gave him an opportunity to play "cleanly and delicately"-as opposed to the over-amplified sound of haflah, or celebration, music. He also enjoyed being able to help shape the performances, including repertoire, arrangements, and the singer's presentation. The group's Arab violinist, Omar Keinani, told Brinner that when Jamal invited him to join Alei Hazayit he relished the prospect of a refuge from the "boring atmosphere, this mess, that's not music, it's a factory." He was referring to the Arab bands that, in his words, were only after money, turning completely materialistic after the end of the first Intifada

The group's determination to remain together in spite of political conflict around them, offers powerful evidence to their audiences that Jews and Arabs can work together creatively, in mutually beneficial ways, to create a shared culture, Brinner notes.

"Despite numerous obstacles, Alei Hazayit persisted because the members felt that they were involved in something that was socially worthwhile and artistically out of the ordinary," he says. "Strong bonds of friendship developed among band members - they enjoyed getting together to rehearse, work out new arrangements, socialize a bit and, when they could, perform."

These groups opened up doors for subsequent musical activity that continues to create shared cultural ground. Yair Dalal continues his work with Arab and Jewish fusion in performances throughout the world, and in his music center in Yafo. Although Bustan Abraham is no longer together, its members have continued to collaborate and perform with musicians globally, and to teach at such institutions as the Jerusalem Academy where new musicians are trained in, and building on, the musical innovations of Bustan Abraham and similar bands.