Mexican American toddlers lag in preliteracy skills, but not in their social skills, new study shows

Mexican American preschoolers fall behind their white counterparts in terms of early language and preliteracy skills, but the social competencies between the two groups are indistinguishable, according to new research from the University of California, Berkeley, and UCLA.

The findings illuminate how Mexican American toddlers and preschoolers grow and develop, and in a report published this week in the Maternal Child Health Journal,the researchers caution teachers, pediatricians and other health care providers to “not assume social-emotional delays, even when language or cognitive skills lag somewhat behind. 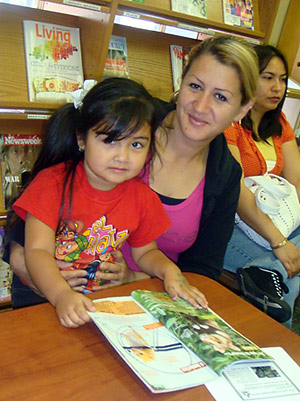 The research team – comprised of research pediatricians, psychologists and a sociologist – also suggests that health practitioners might take particular note of social and emotional delays when they do arise with Mexican American children, given the youngsters’ generally robust development.

Today, one in five children in the United States is Latino, and by 2030, the numbers will be one in three. In California, the majority of all births are now of Latino parentage.

The UC pediatricians and child development specialists tracked a nationwide sample of 4,700 children born in 2001 over a three-year period, when they were between ages 2 and 5 and not yet kindergarteners. Two-thirds of these children were of Mexican descent. Just under one-fifth (19 percent) of them had at least one parent of Latino heritage.

The researchers found startling evidence: Mexican American toddlers between ages 2 and 3 displayed language and cognitive skills about eight months behind those of their white peers, whether assessed in English or Spanish. This gap persisted through ages 4 and 5, with Mexican American children entering kindergarten already behind.

But the explanation may not rest with the youngsters, said UCLA pediatrician and assistant clinical professor of pediatrics Alma Guerrero, who co-directed the new study.

The researchers found that nearly half of Mexican American and other Latino children were read to once a week or less. Just 14 percent of all white parents read to their children that  infrequently. But the researchers noted that Mexican American children’s social strengths may provide helpful scaffolding for more effective interventions on language and cognitive fronts.

These findings support other recent research based on different data that revealed weak literacy practices, but warm and healthy mothering practices, inside Mexican American homes. Those findings were released in September by the Society for Research in Child Development in a report co-authored by Fuller and sociology professor Claudia Galindo of the University of Maryland.

The newest results also corroborate earlier empirical indications that most Mexican American parents nurture socially agile children – whether judged by their parents or teachers – despite being raised in impoverished households and independent of weak literacy traditions in the home.

“But until now, we have not had such a large national sample of Mexican American children and parents to pin down this claim,” Guerrero said.

Spanish was the dominant home language in three-fifths of Mexican American families, and 54 percent of the mothers were natives of Mexico.