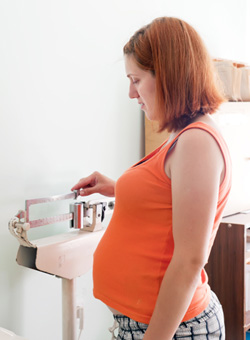 A mother’s weight before pregnancy and the amount of weight she gains while pregnant may have important implications for the hormonal development of her daughter, according to recent research from the UC Berkeley School of Public Health.

Using data from more than two thousand mother-daughter pairs, researchers found that mothers who were overweight or obese before pregnancy and those who gained more weight than recommended during pregnancy were more likely to have daughters who started menstruating earlier—a marker of early puberty that has been associated with a number of negative health outcomes.

Early menstruation, or early menarche, has been associated with higher rates of anxiety, depression, and risky behavior during adolescence, says lead author Julianna Deardorff, assistant professor of community health and human development at the School of Public Health.

As adults, girls who experience early menarche are also at higher risk of obesity, glucose intolerance, cardiovascular disease, and hormone-related cancers such as breast and ovarian cancer. Over the past several decades, age at first menarche has been declining, with more girls entering puberty at a younger age than ever before, particularly among minority populations.

This downward trend and the growing prevalence of obesity and excessive gestational weight gain in the United States makes the potential link between a mother’s weight and her daughter’s hormonal development a salient issue. According to 2010 data from the Centers for Disease Control and Prevention, more than half of women in the United States entered pregnancy overweight or obese, and 48 percent gained more than the recommended amount during pregnancy.

The study, published in Maternal and Child Health Journal and presented at the 2012 annual meeting of the American Public Health Association, adds to a growing body of research suggesting that early life factors, even those that take place before conception, may be essential to understanding health throughout the life course. 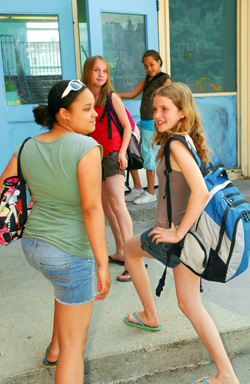 Previous research on this topic has suggested that mothers who are obese and those who gain too much or too little weight during pregnancy are more likely to have daughters who menstruate early, but these studies were in predominately white populations, making it difficult to assess whether these associations occurred among other races and ethnicities.  In particular, none of these studies have included Hispanic women.

“We are the first to be able to look at a nationally representative sample of women, including Hispanic women,” says Deardorff. “We know that African American and Hispanic girls experience menarche earlier, so it’s important to understand the racial and ethnic disparities here and what factors might be in play.”

Researchers looked at pre-pregnancy body mass index (BMI) and gestational weight gain (GWG) using survey data from the 1979 National Longitudinal Survey of Youth. Because the amount of weight a woman needs to gain during pregnancy depends on her starting weight, researchers looked at whether GWG fell below, within, or above the recommended range.

They found that pre-pregnancy overweight/obesity and excessive GWG were independently associated with early menarche in daughters, even when taking into account child’s birth weight and pre-puberty BMI—variables that are known to be associated with age at menarche.

These associations were seen across race/ethnicity, shedding light on the factors at play among minority populations, who are at higher risk for early menarche.

“We expected that the daughter’s size at birth and size just before menarche would be the mechanism through which maternal weight before pregnancy or gestational weight gain might affect daughter’s age of menarche—we were surprised that the association with maternal weight remained even after considering daughter’s weight,” says senior author Barbara Abrams, professor of epidemiology and maternal and child health at the School of Public Health.

It may be that maternal weight is influencing hormonal development in utero, authors note, potentially through leptin, a key hormone involved in hunger and metabolism or through insulin.

These findings stress the importance of looking back at how the lifestyle choices of the mother can impact the “programing of endocrine pathways in children,” says coauthor Rachel Berry-Millet, a graduate student in the Berkeley-UCSF Joint Medical Program.

This study suggests that there may be opportunities for health interventions, such as gestational weight gain counseling, that could help improve the health of girls and women throughout their lives, Berry-Millet says.