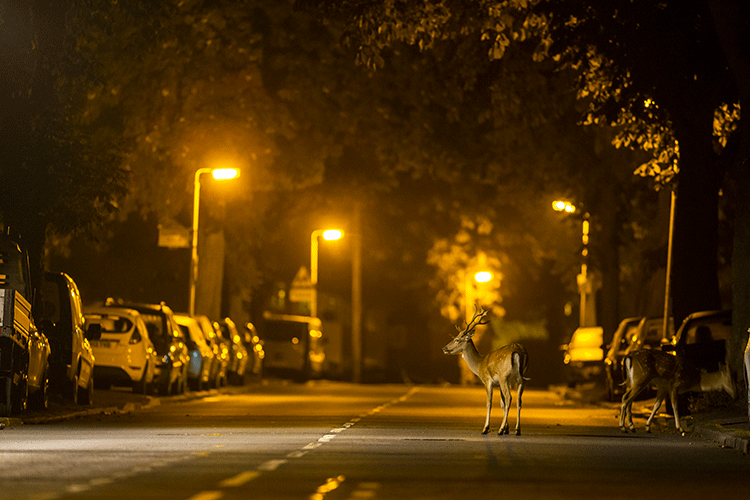 Human activity is causing the planet’s mammals to flee daylight for the protection of night, according to a new study from UC Berkeley.

The study, published today in the journal Science, represents the first effort to quantify the global effects of human activity on the daily patterns of wildlife. Its results highlight the powerful and widespread process by which animals alter their behavior alongside people: human disturbance is creating a more nocturnal natural world.

“Catastrophic losses in wildlife populations and habitats as a result of human activity are well documented, but the subtler ways in which we affect animal behavior are more difficult to detect and quantify,” said Berkeley Ph.D. candidate and study lead author Kaitlyn Gaynor of the Department of Department of Environmental Science, Policy and Management. The research was supported in part by the National Science Foundation.

Gaynor, along with co-authors Justin Brashares, a professor of Environmental Science, Policy and Management, Cheryl Hojnowski of UC Berkeley and Neil Carter of Boise State University, used data for 62 species across six continents to look for global shifts in the timing of daily activity of mammals in response to humans.

On average, mammals were 1.36 times more nocturnal in response to human disturbance.

“While we expected to find a trend towards increased wildlife nocturnality around people, we were surprised by the consistency of the results around the world,” said Gaynor. “Animals responded strongly to all types of human disturbance, regardless of whether people actually posed a direct threat, suggesting that our presence alone is enough to disrupt their natural patterns of behavior.”

Read the full story on the College of Natural Resources website