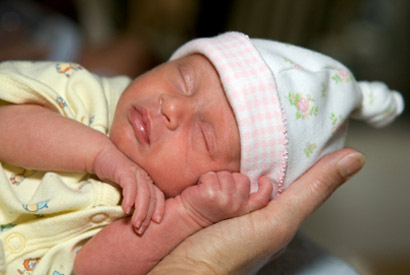 Vulnerability to asthma, heart disease, hypertension and stroke in adulthood begins very early in life and is linked to low birth weight and poverty, according to a new study published in the American Journal of Public Healthand co-authored by an economist at the University of California, Berkeley’s Goldman School of Public Policy.

Nearly 26 percent of study participants who weighed less than 5.5 pounds when they were born had asthma at age 50, compared with about 16 percent of those who weighed more at birth.  Those who grew up in poverty were also more likely to have one of these fatal, debilitating conditions by age 50.

These data are the first nationally representative estimates of adult chronic disease onset by birth weight and by childhood family and neighborhood socioeconomic disadvantage in the United States.

The study findings “provide clues to the childhood origins of racial health disparities in adulthood,” given the well-documented racial differences in socioeconomic disadvantage and low birth weight incidence, said Rucker Johnson, the Goldman School economist and associate professor who co-authored the study, “Early-Life Origins of Adult Disease,” with economist Robert Schoeni at the University of Michigan.

Johnson said the critical period of development from conception to age three is extremely sensitive to stressful environmental conditions because the speed of growth is more rapid then than at any other stage of the life course, and the nutritional needs are greatest.

“Our study shows that interventions and policies that promote early childhood health and reduce childhood socioeconomic disadvantage generate immediate gains in well-being that can justify their existence,” said Schoeni.

The two researchers concluded in their paper that the study may enable more effective policies? to lessen the burden of disease and its economic costs. .

Some 4,387 children in the study were first interviewed in 1968 as part of the Panel Study of Income Dynamics and were followed until 2007, when they were between 39 and 56 years old. The Panel Study has been conducted since 1968 at the University of Michigan Institute for Social Research.  Major study funding comes from the National Science Foundation and National Institutes of Health.

Johnson’s research agenda at UC Berkeley’s Goldman School of Public Policy emphasizes issues of poverty and inequality and examines the intersection of labor markets, the urban economy, and socioeconomic determinants of health over the life cycle.  His work has contributed to the national dialogue between academics, educators, the medical community and policy makers over the most effective health policy interventions and social welfare policies to improve the health and well-being of children and of underserved and vulnerable populations.

He said his research springs from his interest in the interactions between public policies, children’s school, neighborhood and home environments, and how they impact youngsters’ future success.

Johnson joined the Goldman School in 2004.  Earlier this year, he became a visiting scholar with the Russell Sage Foundation in New York City in order to work on a book manuscript extending his cutting-edge paper on the long-run effects of desegregation for adults in areas including education, earnings, incarceration and health.

He will return to the Goldman School in summer 2012. More information about Johnson and his research is online.