Learning by getting into the heads of schoolchildren

Reading. Writing. Arithmetic. Be at school at 8:30, be home by 3:00. Multiplication tables, flash cards, fractions with pie charts and learn the alphabet by sounding it out.

These are the bedrocks of education, passed down through generations of teachers.

But do they work? And if they don’t, how would we ever know?

As neurologists increasingly use brain imaging to understand brain functions, a bold few are including the pillars of education in their search. Meanwhile teachers are looking more and more to science for clues as to how students’ brains develop.

Many have touted imaging techniques like fMRI and EEG as a revolution that is forever changing the way we educate our kids. Scientists at UC are more careful, but a few have leapt headlong into this emerging science.

“It’s not that we’re going to scan every child’s brain and determine from there what kind of intervention or class they should be placed into,” says Silvia Bunge, a professor at the Helen Wills Neuroscience Institute at UC Berkeley. “It’s more a proof-of-concept line of research. Showing that, what do you know, after a few months of a specific training we can see – we can measure – changes in the child’s brain structure and or brain functioning.”

Bunge’s lab focuses on reasoning – the integrative kind thinking children need when given a new kind of problem they don’t recognize. It’s a broad skill, pulling in multiple brain regions and, Bunge believes, crucial to development. 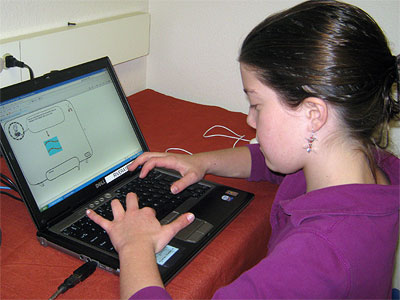 In 2009, Allyson Mackey, one of her graduate  students, took various off-the-shelf games and used them for intense teaching sessions with elementary school kids from poor-performing schools. Contrary to mainstream belief, the games improved both the children’s reasoning and processing skills. This alone would be important, but in the second phase of the work, the team plans to use fMRI imaging to understand what part of the children’s minds actually improve and how.

Another scientist interested in reasoning and pushing the boundaries of education is Susan Rivera at UC Davis. One of the last and hardest reasoning skills children master is proportions – including fractions and percentages. Once they learn it, though, it becomes second nature. Rivera wanted to know if she could nudge that process forward. Like Mackey, she began by having children play games. Using different interactive computer games, the children systematically probed implicit rules of geometry. Eventually these kids became experts in proportional reasoning while the control group did not.

“We wanted to ask the question: Could we push that around? That is, help them ease into a stage of more consolidated reasoning by simply pointing out something to them that is very, very basic.”

In another study, she found that 25 percent of children, when given a task dealing with weights and balances, performed at an adult level while 25 percent of adults performed at a child’s level. She says by itself this is a fascinating bit of trivia. However, using neuroimaging, she discovered that performing at different levels was directly linked to different brain networks, regardless of whether it was a child or an adult. Not only does this show that a different brain system is used for advanced reasoning, it allows Rivera to pinpoint the moment of mastery.

Some scientists have labeled this blending of neurology and education as “neuroeducation” and say it will push education to build on solid science, rather than moving from one fad to the next.

“Neuroeducation will be defined by large data sets, like the stock market or cosmology,” says Ken Kosik, a neuroscientist at UC Santa Barbara. “I think there is going to be a new breed of academic that is going to emerge with a very interesting portfolio of knowledge.”

Rivera and Bunge are careful not to overstate the achievements of this new field, saying it’s still in its infancy. Others, however, have leapt on the bandwagon, saying brain research supports a particular teaching method or as a reason to start school later in the day. A search on Amazon turns up more than 2,500 books on brain-based education – with names like “The New Paradigm of Teaching,” “Brain Quest Kindergarten,” and “How to Grab Your Students By Their Brains.”

“Teachers are just hungry for more information about the brain,” says Bunge. “The problem is what’s being thrown to them is all this ‘brain-based education’ and ‘brain facts,’ most of which is completely out of date – a lot of it is cognitive psychology from the 1950s.”

Many brain-based learning books rely on the pop psychology idea of left-brain/right-brain (analytical versus creative brain hemispheres), which is horrendously outdated and inaccurate. Others extrapolate way beyond the data or offer useless advice dressed up as neurology (the brain requires food, so you have to feed your children before school).

Critics across the country have begun attacking the movement, pointing out that many studies focus on tiny brain regions that could not directly affect entire behaviors. Daniel Willingham – a University of Virgina cognitive scientist and outspoken critic – says teachers shouldn’t pay attention to 95 percent of the claims out there.

“Educators have to be really careful consumers of those kinds of things,” says Pamela Comfort, an associate superintendent at the Contra Costa County Office of Education who has brought Bunge in to talk to her principals and administrators. “You can’t jump to conclusions based on the research. And it isn’t as simple as it is sometimes explained. We need to really make sure what we are doing is really impactful and based on strong science.”

At a February conference in San Francisco, called “Learning and the Brain,” most of the discussion centered around how to make standard teaching better. But some of it also focused on teaching as it applies to problems like attention deficit hyperactivity disorder.

“We’re beginning to get a handle on why kids with ADHD think it’s such a great idea to throw a spitball in classroom even if they know they’re going to get in trouble later.” says Steve Hinshaw, psychology professor at UC Berkeley.

“Neuroimaging techniques have shown that maybe the core, underlying deficit isn’t just that you don’t pay attention but that you value immediate reward far more than long-term consequences.”

Thanks to new imaging techniques, we can watch brain activation in young children to better guide our interventions. The next research we need, Hinshaw says, will combine the results from different imaging types to see where they agree and where they are at odds. Only then will it be known if neuroimaging truly has a place in the classroom.

“I am dubious about wild claims, I don’t want us to pursue a course of phrenology,” he says, referring to early misguided attempts to understand the brain by measuring the skull. “But if we could really understand neural growth and development and its linkages to really well established scientific paradigms of learning, then it could be win-win.”