While the jaw-dropping decline in New York City’s crime rate is welcome news, it comes with a surprising corollary. “Most of the prevailing assumptions that have long driven U.S. crime and drug policy appear to be untrue,” said Berkeley Law professor and renowned criminologist, Franklin Zimring. 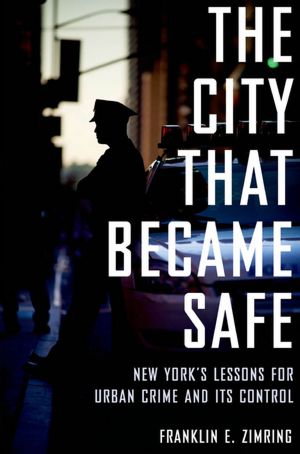 In his new book, The City That Became Safe, Zimring conducts a probing investigation of New York’s more than 80-percent drop in crime from 1990 to 2009. His findings—that police strategy played a key role in crime reduction, and that crime plummeted even as prison populations decreased—overturn decades of conventional wisdom.

As a result of his buzz-generating book, Zimring is in high demand. He’s been a regular guest on news shows; interviewed by national media, including The New Yorker; presented his findings at a national crime symposium; and published op-eds in prominent papers.

America’s 40-percent drop in crime from 1991 to 2000 remains largely an unsolved mystery, while New York City’s drop—twice as long and twice as large—is the greatest U.S. crime decline on record. According to Zimring, a revamped tactical approach by New York police paid giant dividends.

“The NYPD targeted hotspots where crime was most prevalent and persistent, and made a concerted effort to shut down public drug markets,” he said. “Both strategies were extremely effective. The department also increased its manpower and allowed officers to be more aggressive.”

Zimring’s research presents a powerful argument that the factors driving crime are more situational and contingent than previously thought. Criminologists had long assumed that if police camped out in a high-crime area, criminals would simply take their activities elsewhere.

Zimring’s research caught the eye of local Oakland activists, who invited him to speak at a community forum on crime. Oakland Mayor Jean Quan recently unveiled a plan to restore safety to what she says are 100 of the city's most violent blocks. But Zimring believes a 100-block strategy is too vast for Oakland’s short-staffed and under-funded police department. He also says Quan’s plan fails to identify what services police will de-emphasize in order to focus more heavily on the targeted blocks.

“New York’s drug overdose death rate is down 15 to 20 percent, but drug killings are down 90 percent,” Zimring said. “When you see that, you realize drug violence and illegal drug use may be two different problems.”

The City That Became Safe also puts a significant dent into the popular theory that imprisoning criminals is essential to lowering crime. While the U.S. incarceration rate increased 65 percent from 1990 to 2009, New York’s dropped 28 percent.

“It shows that you don’t need a mega-imprisonment policy to achieve a substantial reduction in crime,” Zimring said. “What happened in New York also indicates that, contrary to what many had believed, epidemic levels of violent crime aren’t hard-wired into the populations or cultures of urban America.”