It’s not easy being green: The role of green light in light harvesting complexes in plants

Graham Fleming’s lab has long created new techniques to facilitate further research into the fundamental processes of photosynthesis, especially those processes that have been previously overlooked or not well understood. Graduate student Kaydren Orcutt describes how a new technique, PA-2DEV, was used to study the states involved with harvesting green light by green plants and algae. 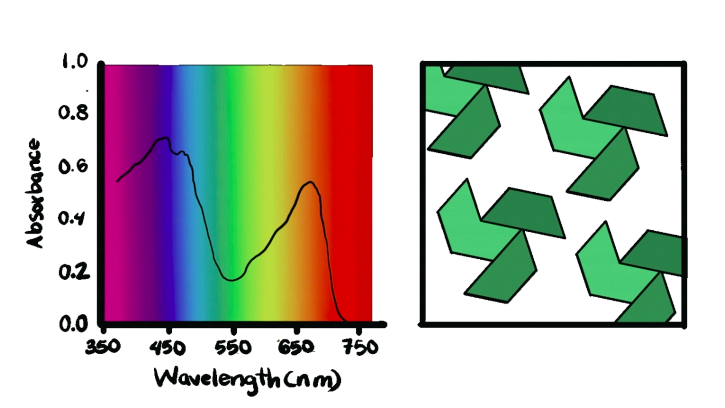 What is color? The color of an object arises from which wavelengths of light are absorbed and which are reflected. For example, we would say a leaf is green because when sunlight—composed of different wavelengths of light like a rainbow—hits the leaf, the leaf absorbs red, orange, yellow, blue, and purple light, and is reflects green light back at us. Based on this description, we might conclude that green light has no effect on the plant as the very color tells us that the plant is rejecting that wavelength of light.

However, recent studies have shown that scientists may have been too hasty to overlook green light and its affect in photosynthetic organisms. A 2009 paper by Ichiro Terashima at the University of Tokyo concluded that green light, under strong illumination, actually drives photosynthesis more efficiently than red or blue light. Still, little is known about the states involved with green light processes. It is not enough to know that plants can utilize green light; the how and why must also be investigated.

Inspired by this earlier study and others like it, Eric Arsenault and Yusuke Yoneda in Graham Fleming’sgroup at the University of California, Berkeley, working with Kris Niyogi, have recently published a paper investigating the origin of the states that harvest green light in photosynthetic complexes. They found that green light is absorbed by electronic (Qx) and vibronic Qy states, primarily those of Chlorophyll b (Chl b). This study may explain why green plants have evolved with different light harvesting pigments and how these distinct pigments may have led to the very high quantum efficiency of photosynthesis.

The main photosynthetic molecules that collect light are called chlorophylls and these molecules have evolved over billions of years to give plants a near perfect ability to convert sunlight to food. The primary light harvesting complex in green plants and algae is light-harvesting complex II (LHCII) and contains light harvesting pigments; 42 chlorophyll, of which 24 are Chlorophyll a (Chl a) and 18 are Chlorophyll b (Chl b), and 12 carotenoid accessory pigments. Previous research was conducted outside of the living organisms that would use these processes, as living systems represent a large challenge to researchers. These limited studies concluded that green light was not useful to these photosynthetic systems, as there was a notable decline in absorption in that region of the spectrum when using isolated LHCII or chlorophyll molecules. Recent work has shown, however, that a closer look at the amount of light of each wavelength used by the plant is nearly uniform across the photosynthetically active region, leading to renewed interest in the green region of the visible spectrum of light. 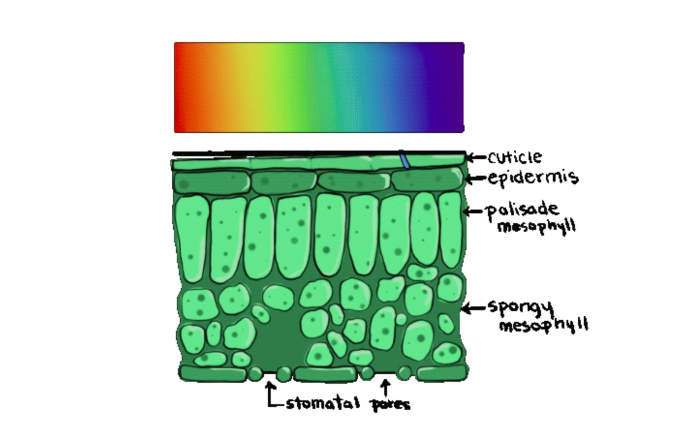 One of the reasons that the isolated studies miscategorized the green light as unimportant is because they do not consider the components and structure of live leaves. The leaf is composed of many different parts, creating a high light scattering environment, which scatters green light throughout the leaf, increasing its effective path length and therefore the chance of absorption by the plant. However, this increase in efficiency does not mean each photon leads to more photosynthesis, but rather than the green light can travel further and thus trigger more photosynthesis throughout the leaf and plant.

While the use of green light by plants has been recorded, the lack of explanation for how exactly the green light is utilized by plants marks a gap in our knowledge of photosynthesis. Due to the close and overlapping energy levels of interest, Fleming’s team developed the technique of polarization-associated two-dimensional electronic-vibrational (PA-2DEV) spectroscopy to study the mixed electronic and vibrational states of the light harvesting complexes in plants. By using a pump and probe of the same and different polarizations, researchers can distinguish states that would overwise be too close or convoluted to gain significant information, without a change in the target energy state. Using this technique, researchers can assign the enhanced ability to use green light to a specific type of chlorophyll, Chl b (rather than Chl a), and thus conclude that Chl b is responsible for harnessing the power of green light and distributing photosynthetic activity throughout a leaf.

“A new type of experiment can reveal the workings of natural systems in cases where conventional methods seem utterly hopeless,” said Fleming. While previous studies showed that green light can be utilized by plants, the “combination of polarization and 2DEV spectroscopy has shown how plants can use the green portion of the sun’s spectrum.”

Ultimately, understanding light harvesting across all possible wavelengths of light—including green light— is necessary to have a complete understanding of the spatial and energetic landscapes of photosynthesis in green plants and algae. This understanding will likely take many more years and the development of many more unconventional techniques, a challenge Fleming and his lab are more than willing to accept.