A new interactive data explorer from the Labor Center at UC Berkeley offers an in-depth look at the people who make up California’s low-wage workforce.

The analysis finds that one in three (32 percent) working Californians has a low-wage job, defined in the data explorer as a job that pays less than $14.35 per hour, which is two-thirds of the median full-time wage in California.

“That’s nearly 5 million people — more than the combined populations of Los Angeles and San Francisco,” said Ian Perry, research associate at the Labor Center who compiled the report. “One in three working Californians is earning an average of $11 an hour in one of the most expensive states in the nation.” Even when working full time, annual median earnings for low-wage workers reach just $21,000. 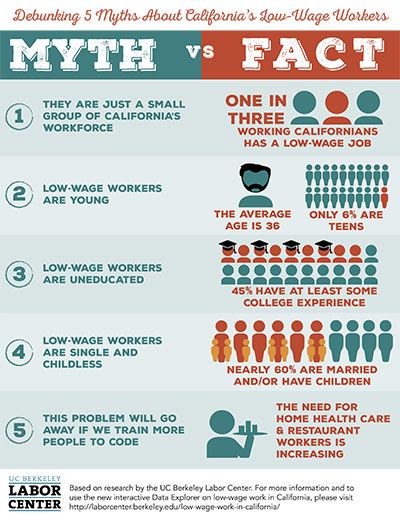 The explorer provides a wide range of other information on the state’s low-wage workforce, including demographics, job characteristics, industries, occupations, use of public assistance programs and geography.

Absent significant shifts in the policy or economic context, California’s low-wage-jobs problem will likely continue, since official employment projections to 2024 do not show a substantial change to the state’s mix of jobs. The state’s minimum wage is scheduled to increase to $15 per hour by 2023, which should help raise pay for low-wage workers, but more work remains to be done, according to Perry.

The findings dispel many common myths about low-wage workers — that they are young (their average age is 36) and single or childless (60 percent are married or have children). A larger, downloadable version of the “Myth vs Fact” infographic at left can be found here.

The data in the explorer are sourced from the federal Bureau of Labor Statistics and the Census Bureau’s 2017 Current Population Survey and 2016 American Community Survey. The project was made possible with a grant from the California Wellness Foundation.

The Center for Labor Research and Education (Labor Center) is a public service project of the Institute for Research on Labor and Employment (IRLE) at UC Berkeley.