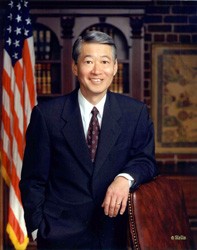 The Matsui Center will also use the Foundation's gift of $150,000 to support and expand ongoing programs designed to provide Cal undergraduates with exposure to the practical political world, said Professor Jack Citrin, Director of the Institute.

"This generous gift means that the Matsui Center will have a more visible presence at Berkeley and within IGS and provide better facilities and expanded programs for students," Citrin said. "At a time of financial challenges for public institutions, this kind of private support is crucial if IGS and the Matsui Center are to continue their mission."

"We have been impressed with the early growth and success of the Matsui Center, and we wanted to help continue that momentum," said Brian Matsui, President of the Matsui Foundation. "We believe this donation will create more opportunities for students interested in public service."

Both the Foundation and the Center honor the legacy of the late Congressman Robert T. Matsui, a Cal graduate who went on to serve 26 years in the House of Representatives, representing the Sacramento area. The Center, which is a component of IGS, was created in 2008.

As a result of the planned renovation and expansion, the Matsui Center will roughly double its physical size within IGS. In addition to improving existing staff offices, the Center will add two important facilities:

The renovated Matsui Center will also have signage on the exterior of Moses Hall and a more visible entrance within the building, making it a more pronounced presence for students. The work is expected to be finished later this fall.

In addition to funding the bulk of the renovation project, the Foundation's gift will also provide support for the Matsui Center's student-oriented initiatives, such as internship programs in federal, state, and local government, and programs that bring distinguished political visitors to the Berkeley campus.

"We strive to expose Cal undergraduates to the worlds of politics and policy," said Ethan Rarick, Director of the Matsui Center. "This gift helps ensure that we can continue, and indeed expand, those efforts." Matsui Center programs are also funded by other private donors, financial support from IGS, and an endowment created through a Congressional grant awarded for the founding of the Center.

The Matsui Foundation was founded by friends and family of the late Congressman after his untimely death in 2005. The Foundation seeks to promote careers in public service for recent college and law school graduates.

The Matsui Center was founded in 2008 as part of the Institute of Governmental Studies at the University of California, Berkeley. The Institute, founded in 1919, is California's oldest public policy research center. The Institute conducts groundbreaking research on politics and policy, houses research and experiential learning programs for both graduate and undergraduate students, operates a public policy publishing imprint, organizes public service programs aimed at the broader community, and includes a library focused on politics and policy.