Low-tech ways of improving soil quality on farms and rangelands worldwide could pull significant amounts of carbon out of the atmosphere and slow the pace of climate change, according to a new UC  Berkeley study.

The researchers found that well-established agricultural management practices such as planting cover crops, optimizing grazing and sowing legumes on rangelands, if instituted globally, could capture enough carbon from the atmosphere and store it in the soil to make a significant contribution to international global warming targets.

When combined with aggressive carbon emission reductions – the best scenario for limiting warming from climate change – the study found that improved agricultural management could reduce global temperatures 0.26 degrees Celsius – nearly half a degree Fahrenheit – by 2100.

“As someone who has been working on carbon sequestration for a long time, I have always had this question in the back of my mind, ‘Will sequestration in soils make a difference with climate change at a global scale?’ ” said study senior author Whendee Silver, a professor of environmental science, policy and management at UC Berkeley. “We found that there are a wide range of practices deployable on a large scale that could have a detectable worldwide impact. A big take-home message is that we know how to do this, it is achievable.”

By throwing in biochar, a controversial soil additive – essentially charcoal – obtained by burning crop residue in an oxygen-free environment, these practices could offset even more warming, potentially as much as 0.46 degrees Celsius (0.7ºF).

The caveat, Silver said, is that this “is only achievable if you couple sequestration with aggressive emissions reduction.” If carbon concentrations increase in the atmosphere, then sequestration becomes less effective at reducing temperature. We would have to pull much more carbon out to realize the same reductions.

She and her colleagues, including lead author Allegra Mayer, a UC Berkeley graduate student, will publish their findings Aug. 29 in the online journal Science Advances.

The IPCC has established carbon-reduction goals to limit average global warming in 2100 to 2 degrees Celsius () above global average temperatures before the industrial revolution, or about 1760. Earth is already halfway to that limit, having warmed 1 degree Celsius since 1880. 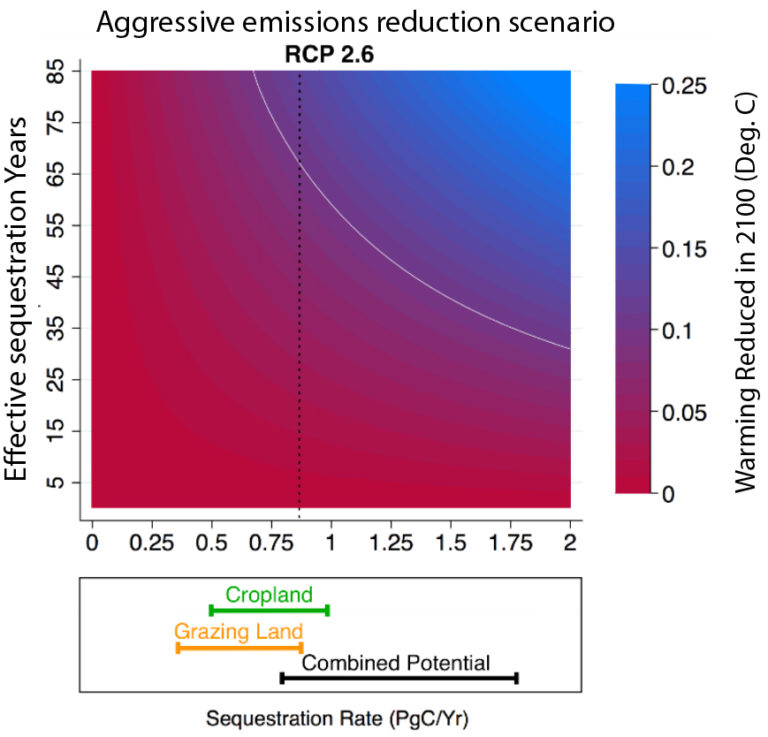 Silver studies various ways to sequester carbon in soils, including composting, to remove some of the carbon dioxide from the atmosphere and slow the greenhouse-driven warming of the planet.

For the new study, Silver, Mayer and their colleagues – Zeke Hausfather of UC Berkeley’s Energy and Resources Group and Andrew Jones of Lawrence Berkeley National Laboratory – used global data on agricultural management approaches that are already known to increase soil carbon storage, along with a climate model that determined the potential impacts on climate if these approaches were widely adopted.

They initially calculated how much carbon would need to be sequestered from the atmosphere into soils to reduce temperatures 0.1 degree Celsius under four different scenarios, from business-as-usual emissions through 2100 to aggressive reduction of carbon dioxide emissions. For the most aggressive reduction scenario, they calculated that soils would have to sequester about 0.68 petagrams of carbon per year worldwide, or 750 million U.S. tons. That is equivalent to 2.5 petagrams of carbon dioxide. One petagram is 1015 or a million billion grams.

Their meta-analysis of existing studies of land management practices showed that improving soil quality could reach and even exceed this goal, largely from the improvement of degraded agricultural and grazing lands that are in use but producing less than optimally. Improved management tends to increase the biomass of crops, grass and their root systems by capturing carbon dioxide via photosynthesis, which results in more carbon storage in the soil.

“These are very commonly used approaches, though people don’t use them to sequester carbon — they are doing it for other reasons. Anytime you increase the organic content of soils, you are generally increasing the fertility, water-holding capacity, sustainability, decreasing erosion and general resilience to climate change,” said Silver, a biogeochemist who holds the Rudy Grah Endowed Chair in Forestry and Sustainability. “Sequestering carbon is a side benefit.”

The researchers did not consider newer practices, such as composting, that are not studied as widely, nor did they consider the effect of improving soil on abandoned land, both of which could increase soil carbon sequestration even more. Newer climate models also could simulate how carbon uptake will change as temperatures rise and rainfall patterns change.

“The point of our paper was to look at the temperature effect of implementing existing low-tech technologies already practiced within agriculture, in developing as well as developed countries,” Mayer said. “There could theoretically be an immediate and widespread adoption of many of these practices.”

With aggressive emissions targets, improved land management could pull about 1.78 petagrams of carbon from the atmosphere each year, while adding biochar to the mix could raise the yearly sequestration rate to 2.89 petagrams.

“Agriculture is often portrayed as the villain in climate change,” Silver said. “What is exciting is that, not only can agriculture contribute to solving the problem, but it can do so in a way that actually improves agricultural soils.”

The project was funded by the Rathmann Family Foundation with additional support from the U.S. Department of Energy’s Office of Science.