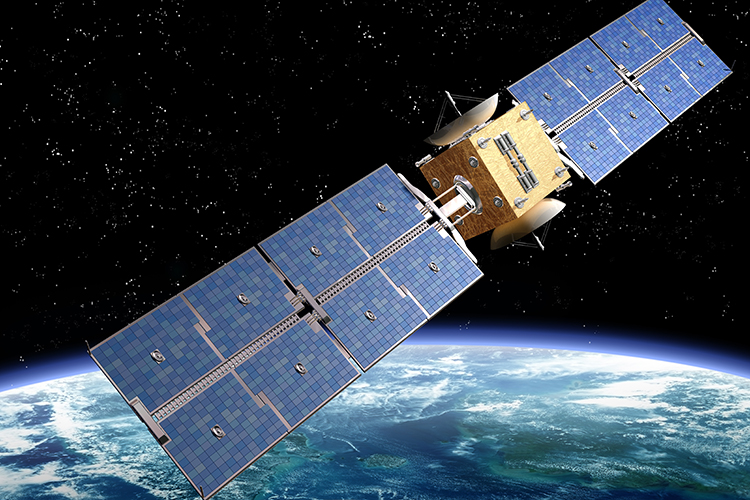 While Assoc. Prof. Panos Patatoukas was discussing Walmart in his Financial Information Analysis course last year, a student brought up the story of how company founder Sam Walton used to count cars in store parking lots to gauge how sales were going.

Patatoukas knew that sophisticated investors had begun doing exactly that on a large-scale basis by analyzing satellite images of retailers’ parking lots, and he began to wonder just how much of an edge it was giving them. So he called up the company that pioneered satellite-image car counting and pitched the CEO on the idea of letting an academic analyze the data. With the help of funding from the Fisher Center for Business Analytics, he landed 4.8 million images of parking lots at 67,000 individual stores across the U.S. owned by 44 major retailers, including Walmart.

The resulting analysis by Patatoukas and Assoc. Prof. Zsolt Katona—the first to quantify in detail the advantages of trading based on satellite imagery of parking lot traffic—found that the strategy can indeed deliver a significant boost for investors savvy enough to exploit it. Traders can accurately anticipate earnings news based on parking lot volume and earn significantly more than a typical benchmark return.

“The informational advantage yields 4% to 5% in the three days around quarterly earnings announcements, which is a significant return over such short window,” Patatoukas says. “If you annualize it, the number is staggering.”

The researchers also found that although this type of satellite data has been commercially available since 2011, the information hasn’t spread beyond a select few large investors, mostly hedge funds. That’s led to a consistently profitable strategy for hedge funds at the expense of individual investors, Patatoukas says: In particular, investors with access to satellite imagery data can get ahead of the rest of the market and target retailers with bad news for the quarter. This investment edge allows them to bet against those retailers by short selling their stock, even as individual investors are still buying.

“What we found is that it’s a gain for large sophisticated investors who can afford the substantial costs of acquiring and processing big alternative data at the expense of Main Street investors,” Patatoukas said. “If it was just a transfer of wealth between hedge funds, that would be a different story, but it’s small individual investors who tend to be on the other side of the trade.”

His working paper—co-authored by Marcus Painter at the University of Kentucky and Berkeley Haas doctoral student Jieyin Zeng—raises questions about individual investor protections in an age of new “alternative data” sources. Even as technology has made trading more accessible to the masses, the rise of big data is creating so-called alternative data that only those with superior resources are tapping into.

The “dark side” of big data

Skilled investors have always competed for an information edge that allows them to outperform the market by even fractions of a percentage point—that’s how Wall Street operates. Until recently, however, those traders had access to the same reports, earnings calls, SEC filings, and other public sources of information as everyone else. Trading on material non-public information, after all, is against the law, and the SEC makes detection and prosecution of insider trading one of its top enforcement priorities.

But technology is increasingly blurring the boundaries between public and private information, creating data opportunities that are legal, but are expensive and often require special expertise to access.

“Technology was supposed to level the playing field, but what I see is the fence separating sophisticated and unsophisticated investors growing higher,” says Patatoukas, who is passionate about teaching his students to analyze public sources of financial information and finds the trend troubling. “That’s the dark side of big data. Our evidence suggests that unequal access to alternative data leaves individual investors outside the information loop.”

How to formulate a trading strategy from outer space

RS Metrics pioneered the analysis of satellite images of parking lots in 2011, with hedge funds as their primary customers. Other companies such as Orbital Insight have followed suit, obtaining images from satellite companies and processing them with both software and human analysts. Not only is the data expensive, but it takes substantial skill to analyze and combine with other information sources to yield results, Patatoukas says. “You have to have the right people, and those people tend to be expensive.”

Patatoukas’ paper lays out exactly how investors can formulate a trading strategy from outer space. Using images from RS metrics from 2011 to 2017 covering 44 major U.S. retailers, including Walmart, Target, Costco, and Whole Foods, the researchers confirmed that year-over-year changes in the number of cars in individual stores’ parking lots is a reliable predictor of quarterly sales—a widely used metric for retailers’ performance. The researchers later added in more images from competing firm Orbital Insight, which covers the same companies, and found that combining the two datasets allowed for even more accurate predictions, and an even more profitable strategy.

In fact, parking lot volume is such a reliable indicator of retail sales that it can be used to identify errors in analysts’ forecasts in the three-week period after stores’ quarterly earnings are in, but before they’re announced to the public. Using data from Markit, a service that tracks daily institutional lending activity, they found a boost in stock lending in the five days before earnings announcements. That’s an indication of “informed short selling activity,” targeting retailers with bad news for the quarter (the strategy works with long and short-sale positions, but the researchers found it is most profitable for short sales).

Meanwhile, drilling into data on trading by individual investors during the same period, they found that individuals are net buyers of the same retailers that the hedge funds are betting against. Main Street investors can’t piggyback on what the hedge funds are doing since the short-selling market is opaque: The general investment community can only see short-interest data twice per month, and only with a significant delay.

In terms of market reaction to earnings announcements, they found no difference between retailers covered by the satellite image companies and those that are not. Clearly, the parking lot intelligence is not increasing price discovery for the market overall, Patatoukas says.

“Over the last seven years it’s been a pretty profitable strategy for hedge funds, and the value of the parking lot signals hasn’t yet been competed away. Part of that has to do with the fact that access to satellite imagery data has been so exclusive,” he says. “Once uncertainty about the signals has been removed and it’s known that there’s value to be extracted, more investors will start using it and the advantage will be competed away.”

In that regard, Patatoukas says, the dissemination of the working paper itself will impact the market for satellite parking lot data in the short term, since it provides the first independent analysis showing whether—and how—trading from outer space works.

In the aftermath of the financial crisis, there has been increased regulatory interest in the role of informed trading and disclosure requirements to protect the fairness and integrity of capital markets. With this in mind, Patatoukas hopes that the paper will get the attention of the regulators. “In a market setting where the line separating public from material non-public information is getting blurrier, the question that regulators need to answer is: What is their role in terms of leveling the playing field for individual investors?”

While the value of the parking lot data will dissipate as technology improves and it becomes more accessible, investors will no doubt find new data sources that will yield insights once only available to company insiders. For example, investors may already be harvesting geolocation data from inside consumers’ pockets as they move around stores with their smartphones, Patatoukas says.

“This is just the tip of the iceberg,” Patatoukas says. “While so far the focus has been mostly on the bright side of big and alternative data, there might be a less auspicious side to the rise of such data in capital markets.”