Elemental sulfur, the most heavily used pesticide in California, may harm the respiratory health of children living near farms that use the pesticide, according to new research led by UC Berkeley.

In a study of children in the Salinas Valley’s agricultural community, researchers found significant associations between elemental sulfur use and poorer respiratory health. The study linked reduced lung function, more asthma-related symptoms and higher asthma medication use in children living about a half-mile or less from recent elemental sulfur applications compared to unexposed children. 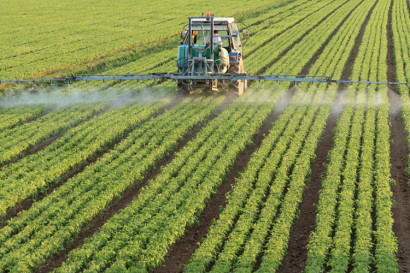 The Environmental Protection Agency generally considers elemental sulfur as safe for the environment and human health, but previous studies have shown that it is a respiratory irritant to exposed farmworkers. Elemental sulfur’s effect on residential populations, especially children, living near treated fields has not previously been studied despite the chemical’s widespread use and potential to drift from the fields where it is applied. This study is the first to link agricultural use of sulfur with poorer respiratory health in children living nearby.

The study was published August 14 in the journal Environmental Health Perspectives. The research was funded by the National Institute of Environmental Health Sciences and the EPA. Rachel Raanan, a UC Berkeley postdoctoral fellow and the study’s lead author, was supported by the Environment and Health Fund in Israel. Research protocols were approved by the UC Berkeley Committee for the Protection of Human Subjects.

Elemental sulfur is allowed for use on conventional and organic crops to control fungus and other pests and is very important to both systems. It is the most heavily used agricultural pesticide in California and Europe. In California alone, more than 21 million kilograms of elemental sulfur were applied in agriculture in 2013.

“Sulfur is widely used because it is effective and low in toxicity to people. It is naturally present in our food and soil and is part of normal human biochemistry, but breathing in sulfur dust can irritate airways and cause coughing,” said co-author Asa Bradman, associate director of the Center for Environmental Research and Children’s Health at Berkeley’s School of Public Health. “We need to better understand how people are exposed to sulfur used in agriculture and how to mitigate exposures. Formulations using wettable powders could be a solution.”

For the study, the research team examined associations between lung function and asthma-related respiratory symptoms in hundreds of children living near fields where sulfur had been applied. The children were participants in the Center for the Health Assessment of Mothers and Children of Salinas (CHAMACOS) study, a longitudinal birth cohort that is a partnership between UC Berkeley and the Salinas Valley community. CHAMACOS is the longest running longitudinal birth cohort study of pesticides and other environmental exposures among children living in an agricultural community. The cohort participants were primarily born to families of immigrant farmworker families.

The study also found that each 10-fold increase in the amount of elemental sulfur applied in the previous 12 months within a 1-kilometer radius of the home was associated with an average decrease of 143 milliliters per second (mL/s) in the maximal amount of air that the 7-year-old children could forcefully exhale in one second. For comparison, research has shown that exposure to maternal cigarette smoke is associated with a decrease of 101 mL/s after five years of exposure.

“This study provides the first data consistent with anecdotal reports of farmworkers and shows that residents, in this case, children, living near fields may be more likely to have respiratory problems from nearby agricultural sulfur applications,” said senior author Brenda Eskenazi, Berkeley professor at the School of Public Health.

Given elemental sulfur’s widespread use worldwide, the study authors call urgently for more research to confirm these findings and possible changes in regulations and application methods to limit impacts of sulfur use on respiratory health.