Pictures of a Gone City: Tech and the Dark Side of Prosperity in the San Francisco Bay Area, a new book by UC Berkeley economic geographer Richard Walker, sets off some seismic tremors in its unflinching evaluation of the perch of Silicon Valley and the entire San Francisco Bay Area at the apex of technological power and the heart of contemporary capitalism.

The world is a beautiful place

to be born into

if you don’t mind happiness

so very much fun

if you don’t mind a touch of hell

just when everything is fine

because even in heaven

The world is a beautiful place

to be born into

if you don’t mind some people dying

or maybe only starving

some of the time

which isn’t half bad

if it isn’t you

Walker’s “Gone City” repeatedly taps that vein as he tracks Bay Area development in the contemporary tech boom, with its astonishingly wealthy corporations such as Google and Facebook, brutal housing affordability crisis and a bizarre social model where one aspiring mogul remarked, “You’re nobody here at $10 million.”

In contrast to the megaregion’s remarkable prosperity is a much less palatable but undeniable economic inequality and a growing class divide, despite victorious recent campaigns to raise the minimum wage in San Francisco, Oakland and San Jose.  The Bay Area leads a national trend of growing inequality at the top, with “more billionaires per square foot than anywhere else on earth,” says Walker.

Walker — an emeritus professor whose research has focused on California’s economic history as seen through agricultural, environmental and labor issues — says the “gee-whiz statistics of growth and good times” for the tech sector do not lift all boats, despite claims to the contrary. And his book, he says, is aimed not at fellow scholars but at the general public eager to understand the world around them. 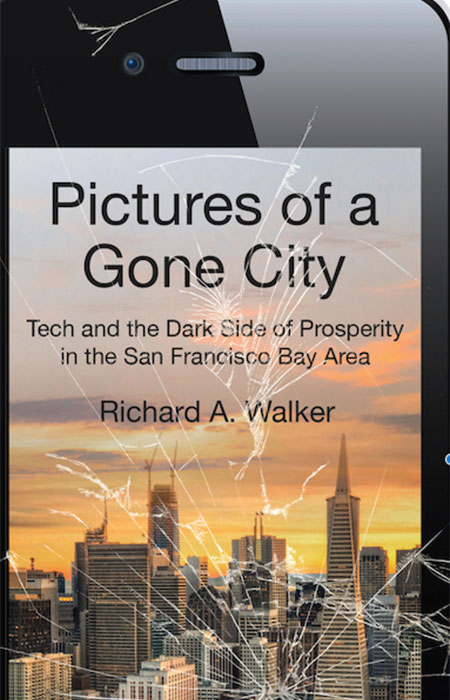 He describes the Bay Area as “a wonderful world if your place in the new Gilded Age is secure; but it looks a lot more hostile if you drive an Uber car through massive traffic jams or cannot find a decent rental within 50 miles of your job…”

The worst aspect of the bay region’s wage distribution is not just the shrinking middle, he writes, but the sheer number of low-wage workers — about 1.3 million people from families whose members total between 3 and 4 million.

“Another name for low-wage workers is cheap labor, and it is shocking to see how prevalent it is,” he writes, adding that these workers also are known as the working poor.

The “gig economy” may sound cool, but its flexible or contingent employment accounts for between a quarter and a third of all Bay Area jobs. “While commonly touted as a kind of freedom from regular work and direct supervision, it is more like the latest twist of the rope that millions of workers hang on to for dear life,” says Walker.

He wraps up “Gone City” with a critique of what he calls the “fearsome naiveté in Tech World” that has enabled too many to ignore the ways in which technology not only fails to improve the lives of ordinary people, but also kills jobs, promotes lies, invades privacy and undermines democracy.

“Tech World may appear open, transparent and liberatory on the surface, “ Walker writes, “but it rests on the hidden power of algorithms and corporations who play by the skewed rules of the game of markets, profit-making, and capital accumulation.”

Walker notes that it has a relatively diverse economic base that extends well beyond tech, which only constitutes 10 percent of Bay Area employment. Other sizeable and growing sectors include hospitality, health care, finance and even manufacture, wholesale, transportation, retail and until the Great Recession, government.

These non-tech fields of work boast their own share of innovation and start-ups, says Walker, ranging from health care management to environmental restoration. This serves the region’s economy well, he advises, and helps it avoid over-specialization that can turn costly, as seen in the past with the energy sector in Houston or Detroit’s focus on the automotive industry.

“If, in the end, my take on the Bay Area grates against conventional boosterism, so much the better,” Walker writes. “Mainstream thinking has helped deliver this country to its present fate by the refusal to recognize many deep and disturbing truths about American society. In too much of everyday U.S. ideology, ‘class’ is a dirty word, the individual is king, racism is a matter of bad thoughts and not the social order, capitalism is confused with market exchange, and markets never fail, only governments.”

Walker has written extensively about California, from its bountiful agriculture to its conservation movements.  Earlier books include The Conquest of Bread (2004), The Country in the City (2007), and The Atlas of California (2013).