Getting to the root of the water cycle

In a remarkable outdoor laboratory in the Sierra, UC Merced and UC Berkeley researchers use sensors to gather a mother lode of data to greatly improve ecological measurement and hydrologic forecasting. 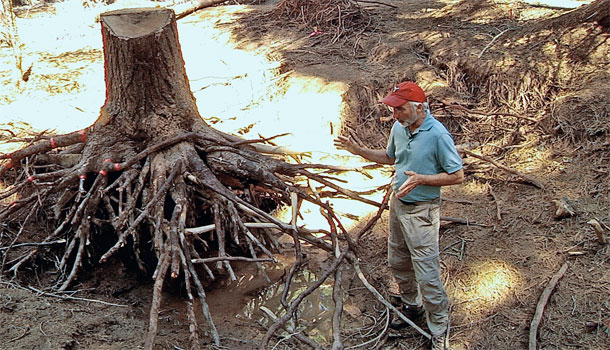 What winter brings to the Sierra Nevada determines, more than anything, how much water can be tapped in summer by California’s communities and businesses, including the state’s $35 billion agricultural industry. About 60 percent of the water used in California comes from melting Sierra snow.

Water managers have always faced a difficult task trying to allocate the state’s most precious resource. They need to know how much water to store in reservoirs and how much to send downstream, and when. But estimates of the amount of Sierra water the reservoirs will receive sometimes are off by as much as 20 to 30 percent.  At rates of $100-$600 per acre-foot delivered to metropolitan areas, a 20 percent error could translate into a more than $150 million shortage or excess of water needed downstream.

New models of climate change predict an increase in the proportion of water that will fall on the Sierra as rain instead of snow, further limiting the ability to rely on the snowpack as a kind of cold-season water storage facility. This could place new pressures not only on human use but also on wildlife and overall ecological stability.

Historically, the amount of water held in the Sierra winter snowpack has been estimated by intrepid snow surveyors who ski and helicopter in to selected mountain sites to measure snow depth monthly with steel tubes shoved into the snow.

The obvious solution seems to be wiring up the Sierra with sensors, but this has its own built-in limits: The physical constraints of laying wires throughout remote regions would still limit coverage, not to mention the unavoidable hazards of bears plowing through the wires and rodents chewing them up.

The solution lies in matching remote measurements from satellites with wireless ground monitoring. A specially designed new generation of wireless sensors, developed by co-principal investigator Steven Glaser, professor of civil and environmental engineering at UC Berkeley and faculty director of the CITRIS Intelligent Water Infrastructure initiative, are now being deployed and tested in an ambitiouspilot project directed by hydrologist Roger Bales at the UC Merced Sierra Nevada Research Institute.

The Berkeley-Merced collaboration uses matchbook-sized sensors with wireless communicating micro-processors known as motes to measure soil moisture, snow depth and other features critical to predicting spring and summer water availability. The system is designed to transmit the real-time measurements to researchers and water managers.

The prototype grid is being established on a 2.5-square kilometer site in the Sierra Nevada, which itself is a portion of an even more ambitious ecological research project called the Southern Sierra Critical Zone Observatory, or CZO, an National Science Foundation-supported mountain research site located about an hour east of Fresno. (See video.)

Such a grid of independent but integrated sensors not only could improve estimates of water availability, but also help scientists understand large-scale processes that otherwise would be intractable. Incoming solar radiation, snow depth, soil temperature, atmospheric gases, plant respiration and moisture at different depths — the wireless grid can measure all these ecological features.

With this mother lode of data, researchers hope to dissect such complex processes as how landscape variations affect the way soil moisture, evapotranspiration and stream flow respond to snowmelt and rainfall. The research is led by hydrologist Roger Bales, professor of engineering at UC Mercedanddirector of the Sierra Nevada Research Institute. Bales (in photo above) is also a principal investigator on the CZO, which involves collaborators from five UC campuses.

“What we are deploying right now in this small watershed lays the foundation for new information systems to greatly improve ecological measurement and hydrologic forecasting,” Bales says. “At the same time, it is advancing sensor technology and provides insights about basic Earth-atmosphere interactions.”

Bales already has his eye on a much larger effort. He has proposed creating a wireless sensor grid to monitor the entire snow-covered region of the American River basin — more than 3,000 square kilometers.

“When we can measure these features at the large watershed scale, we can really make a major contribution to the state’s water management,” he says.  “Such a grid, along with satellite data, advanced hydrologic models and supporting cyber-infrastructure will form the core of a new water information system for California.”

The Merced-Berkeley collaboration is supported by CITRIS, the Center for Information Technology Research in the Interest of Society, which brings together researchers from different UC campuses to create information technology solutions for social, environmental and health care problems.

CITRIS is one of four California Institutes for Science and Innovation, formed in 2000 and funded both by the state and industry to take on large-scale challenges that demand cross-disciplinary expertise.

“Harnessing wireless sensor technology for watershed-scale monitoring has the kind of research reach that the institutes were designed to address,” says Paul Wright, the CITRIS director.

“We had this idea 10 years ago to create a network of sensors, which would communicate with each other, and together make a kind of giant array,” Glaser says. “At that time I was thinking about using it for earthquake monitoring. But Roger’s idea of using a sensor array to help predict water availability from an entire watershed seemed like an exciting opportunity.”

In place of the kind of yardstick approach traditionally used to measure snow depth, an acoustic sensor mounted on a pole a known distance above the rock sends out an acoustic chirp that bounces off the rock surface and returns. This two-way travel time is measured.  If winter brings, say, a two-foot snowpack, the surface is now that many feet closer to the sensor, so an acoustic signal will bounce off the snow and return more quickly. Since researchers know the speed of sound through air, they can estimate the distance between the sensor and the snow versus bare rock surfaces. Subtracting the first from the second gives the thickness of the snow.

“This is the same technology used by early auto-focusing cameras,” says Glaser. “You can actually hear the short little clicks of the acoustic signal.”

Branko Kerkez, a graduate student in Glaser’s lab, is the principal researcher on the ground trying to make sure the novel sensor network performs as intended.  Born in Bosnia and raised in Florida, he was more familiar with the Berkeley coffeehouse environment than the great outdoors when he started the project.

“I thought I was going to grad school to do math, not so much hiking in the snow,” he says. “At first, it was a clash of worlds. It’s a four- or five-hour drive, and then sometimes another hour snowshoeing. But I’ve grown to like it. It’s very exciting to learn and then directly apply what you learn, and it’s aimed at such an important problem.”

Kerkez hopes to apply what he’s learned to improve large-scale water allocation and to mitigate flooding and produce hydropower.

The former coffeehouse habitué now says, “This is the ultimate project for me.”