California biologists have discovered four new species of reclusive legless lizards living in some of the most marginal habitat in the state: a vacant lot in downtown Bakersfield, among oil derricks in the lower San Joaquin Valley, on the margins of the Mojave desert, and at the end of one of the runways at LAX.

“This shows that there is a lot of undocumented biodiversity within California,” said Theodore Papenfuss, a reptile and amphibian expert, or herpetologist, with UC Berkeley’s Museum of Vertebrate Zoology, who discovered and identified the new species with James Parham of California State University, Fullerton. The discoveries raise the number of California legless lizard species from one to five.

“These are animals that have existed in the San Joaquin Valley, separate from any other species, for millions of years, completely unknown,” said Parham, who obtained his doctorate from Berkeley and is now curator of paleontology at the John D. Cooper Archaeology and Paleontology Center. “If you want to preserve biodiversity, it is the really distinct species like these that you want to preserve.”

Papenfuss and Parham reported their discovery on Sept. 17 in the journal Breviora, a publication of the Museum of Comparative Zoology at Harvard University.

Legless lizards, represented by more than 200 species worldwide, are well-adapted to life in loose soil, Papenfuss said. Millions of years ago, lizards on five continents independently lost their limbs in order to burrow more quickly into sand or soil, wriggling like snakes. Some still have vestigial legs. Though up to eight inches in length, the creatures are seldom seen because they live mostly underground, eating insects and larvae, and may spend their lives within an area the size of a dining table. Most are discovered in moist areas when people overturn logs or rocks.

For the past 15 years, Papenfuss and Parham have scoured the state for new species, suspecting that the fairly common California legless lizard (Anniella pulchra), the only legless lizard in the U.S. West, had at least some relatives. They discovered one new species – yellow-bellied like its common cousin – under leaf litter in protected dunes west of Los Angeles International Airport. They named that species A. stebbinsi, because Stebbins grew up and developed an early interest in natural history in the nearby Santa Monica Mountains. 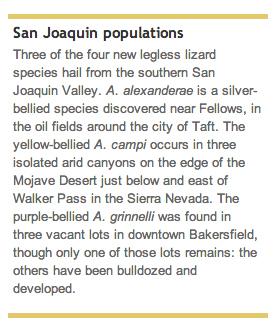 Because many sandy, loamy areas, including dunes and desert areas, offer little cover for lizards if they emerge, Papenfuss distributed thousands of pieces of cardboard throughout the state in areas likely to host the lizard. He returned year after year to see if lizards were using the moist, cool areas under the cardboard as resting or hunting grounds.

This technique turned up three other new species in the Central Valley (see sidebar): A. alexanderae, named after Annie Alexander, who endowed the UC Berkeley museum in 1908 and added 20,000 specimens to its collections; A. campi after Charles Camp, because of his early-career discovery of the Mt. Lyell salamander in the Sierra; and A. grinnelli after Joseph Grinnell, who in 1912 first noted habitat destruction around Bakersfield from agriculture and oil drilling.

Interestingly, all these species had been collected before and were in collections around California, but when preserved in alcohol, the lizards lose their distinctive color and look identical. Papenfuss and Parham identified the species through genetic profiling, but they subsequently found ways to distinguish them from one another via belly color, number and arrangement of scales, and number of vertebrae. However, two species – the previously known common legless lizard of Northern California and the newly named southern species found at LAX and apparently broadly distributed south of the Tehachapi Mountains – remain indistinguishable except by genetic tests or, now, the location where they are found.

Papenfuss and Parham are working with the California Department of Fish and Wildlife (CDFW) to determine whether the lizards need protected status. Currently, the common legless lizard is listed by the state as a species of special concern.

“These species definitely warrant attention, but we need to do a lot more surveys in California before we can know whether they need higher listing,” Parham said.

Papenfuss noted that two of the species are within the range of the blunt-nosed leopard lizard, which is listed as an endangered species by both the federal and state governments.

“On one hand, there are fewer legless lizards than leopard lizards, so maybe these two new species should be given special protection,” he said. “On the other hand, there may be ways to protect their habitat without establishing legal status. They don’t need a lot of habitat, so as long as we have some protected sites, they are probably OK.”

Papenfuss says they are not yet in danger of going extinct, since he has found some of the lizards in protected reserves operated by the CDFW, the U.S. Bureau of Land Management and a private water reserve outside Bakersfield, in addition to the El Segundo Dunes near LAX.