The cost of domestic flight delays puts a $32.9 billion dent into the U.S. economy, and about half that cost is borne by airline passengers, according to a new study led by researchers at the University of California, Berkeley.

The research was commissioned by the Federal Aviation Administration (FAA), and the final report was delivered to the agency on Monday, October 18, 2010.

The comprehensive new study analyzed data from 2007 to calculate the economic impact of flight delays on airlines and passengers, the cost of lost demand, and the collective impact of these costs on the U.S. economy. The study authors found that increased delays directly correlate with increased costs. 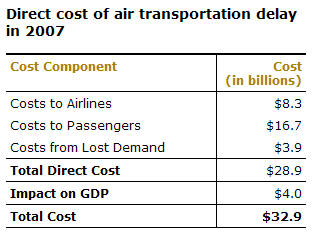 Of the total costs, $16.7 billion, or just over half the cost, was borne by passengers, the study found. This number was calculated based on lost passenger time due to flight delays, cancellations and missed connections, plus expenses such as food and accommodations that are incurred from being away from home for additional time.

"This is the most comprehensive study done to date analyzing the monetary cost of airline flight delays," said Mark Hansen, UC Berkeley civil and environmental engineering professor and lead researcher on the study. Hansen said most previous studies have focused on the cost to airlines; the new study analyzed the complex relationship between flight delay and passenger delay, and considered how degraded service quality affects the demand for air travel.

"Before this work, no one actually analyzed the data to see how flight delay affects airline cost or passenger lateness," said Hansen. "While there are a lot of widely available data on flight delays, passenger itineraries and airline costs, this is the first attempt to fully exploit that information to measure the impacts of delay."

Hansen said previous estimates of these costs relied on assumptions and expert opinion, while the research team's results are largely driven by the actual data.

The $8.3 billion direct cost to airlines included increased expenses for crew, fuel and maintenance, among others. Nearly half this cost is due to padded schedules, the hidden delays that are built into schedules because the airlines anticipated them.

In addition to the direct costs to the airline industry and its customers, flight delays have indirect effects on the U.S. economy, the report said. The authors noted that inefficiency in the air transportation sector increases the cost of doing business for other sectors, making the associated businesses less productive. The study estimated that air transportation delays reduced the 2007 U.S. gross domestic product (GDP) by $4 billion.

Hansen is a director of the National Center of Excellence for Aviation Operations Research (NEXTOR), a multi-university aviation research center of which UC Berkeley is a core partner. The co-authors are from the Massachusetts Institute of Technology (MIT), George Mason University, the University of Maryland and Virginia Tech – all NEXTOR-affiliated universities.  Additional work was performed by The Brattle Group, a consultancy.

The study includes costs not previously tallied as part of a single data set:

• The cost to passengers based on passenger time lost, delayed flights, flight cancellations, and missed flight connections on multi-leg flights
• The cost of hidden delays, that is, delays that the airlines anticipate and thus build into "padded" or "buffered" schedules
• The cost of forced rescheduling due to runway capacity limitations
• The cost to passengers of additional time spent away from home because of anticipated delays
• The total cost of lost demand from potential airline customers who used alternatives such as traveling by automobile, or conducting their business using telecons and video conferencing, rather than face airline delays
• The impact of delays and cancellations on the GDP based on lost productivity


Researchers used an innovative method to calculate the effect of flight delays on airline passenger costs. Delay estimates previously have used a straightforward accounting method, assuming, for example, that if a plane is delayed 10 minutes and it had 100 passengers, then the delay to passengers would simply be 1,000 minutes.

"The method we used more closely reflects the reality that a given flight delay can affect various passengers differently," said Cynthia Barnhart, interim dean and professor of civil and environmental engineering at MIT's School of Engineering, and a member of the MIT-George Mason team that focused on passenger delays.

"Some of them may lose several hours of time as the result of missing a connecting flight, while others may simply have a longer layover," she said.

The passenger-cost portion of the study also tried to account for the phenomenon of people spending extra time away from home because of the expectation of delay.

"If I have a meeting that begins at 10 a.m. Tuesday in Washington, I would likely fly out from Boston on Monday night rather than early on Tuesday, just to ensure that I arrive on time," Barnhart said. Costs were measured by assigning a standard cost to time, plus other travel expenses.

UC Berkeley researchers, who focused on airline delays, found that airlines with high rates of delay also have higher overall operating costs. Notably, researchers examined the impact of schedules that airlines adjust to pad flight-time estimates with added time for anticipated delays. "This padding may be invisible to travelers, but we found that the costs of delays due to padding are as large as the cost of delays that are visible," said Hansen.

The FAA commissioned the research because previous studies had discrepant numbers in some key areas of concern. "The significance of this study is its use of innovative techniques to quantify the total cost of congestion to the aviation industry, the economy and society," said David K. Chin, director of performance analysis and strategy at the FAA's Strategy and Performance Business Unit. "These innovations created new economic measures for airline schedule padding, passenger delay impact and lost productivity," said Chin.

The new study emphasizes that not all delays can or should be eliminated, especially delays due to mechanical failures and severe weather that are necessary to protect passenger safety.

But increased scientific knowledge on the issue can improve operations and influence policy, said Hansen.

"Flight delay is a serious and widespread problem that places a significant strain on the U.S. air travel system and its customers," he said. He added that the NEXTOR study is intended to provide a frame of reference for decision-makers to assess the magnitude of the flight delay problem and the need for initiatives to address it.

The full report is available online.