Air pollution has disproportionately hurt minority and low-income communities, leading to reduced life expectancy, research has found. Yet a lack of data has stymied efforts to quantify the problem—and its causes—nationwide.

A recent study, anchored by new satellite-based measures of air quality, found some encouraging news: The gap between Black and white Americans’ particulate exposure has declined over the past two decades, due largely to enforcement of the Clean Air Act in the country’s most polluted areas.

“The existing research on air pollution has been hampered by a sparse Environmental Protection Agency monitoring network, but satellite-based measurements of air quality have greatly expanded the ability of policymakers and researchers to fill in the huge gaps in exposure measurement throughout the U.S.,” said Walker, of the Business and Public Policy Group. “We’ve used this new data to come to show how the Clean Air Act has led to a narrowing of the gap in pollution exposure between Black and white communities.” 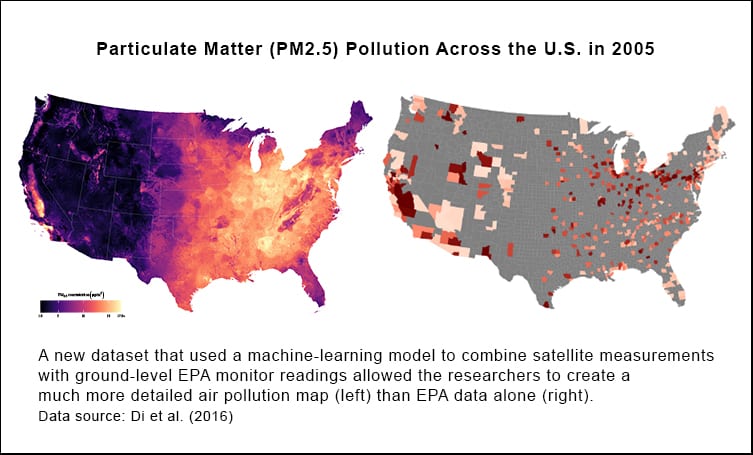 Walker said he believes this is the first paper “to explore the underlying causal drivers that contributed to the narrowing of this gap.” The researchers combined fine-grained measures of ambient air pollution levels of particulate matter for the entire United States. with more than 30 million individual survey responses from the U.S. Census and the American Community survey. They found that while African Americans were more likely to live in areas with higher pollution, relative improvements in air quality from 2000 to 2015 have narrowed this gap considerably.

The researchers estimated that only a small share of the reduction in the exposure gap was due to shifting population patterns, as Black Americans moved to less-polluted neighborhoods and white Americans moved to relatively dirtier ones, such as city centers. However, they estimated that these mobility patterns accounted for only 13% of the decrease in the Black-white exposure gap over the study period.

Instead, they found much stronger evidence for a second explanation—that the decline in the Black-white mortality gap was primarily the result of air quality improvements within areas with a higher share of Black residents. And the improved air quality in these areas correlated with the introduction of national ambient air quality standards for small particulates (PM2.5) in 2005, when the Environmental Protection Agency (EPA) began enforcing these new standards under the Clean Air Act.

In fact, the researchers estimated that 60% of the overall decline in the Black-white pollution gap was due to the enforcement of Clean Air Act regulations in the most polluted areas.

“The Clean Air Act has disproportionately improved air quality in low-income and minority communities, and this is almost by design given how the Act was written over 50 years ago,” Walker said.