Emotional intelligence peaks as we enter our 60s, research suggests

Older people have a hard time keeping a lid on their feelings, especially when viewing heartbreaking or disgusting scenes in movies and reality shows, psychologists have found. But they're better than their younger counterparts at seeing the positive side of a stressful situation and empathizing with the less fortunate, according to research from the University of California, Berkeley. 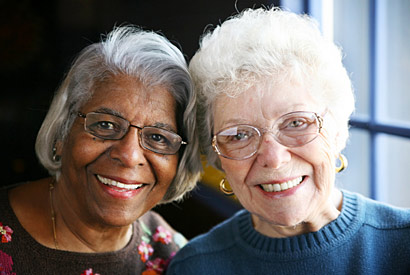 A team of researchers led by UC Berkeley psychologist Robert Levenson is tracking how our emotional strategies and responses change as we age. Their findings – published over the past year in peer-review journals – support the theory that emotional intelligence and cognitive skills can actually sharpen as we enter our 60s, giving older people an advantage in the workplace and in personal relationships.

"Increasingly, it appears that the meaning of late life centers on social relationships and caring for and being cared for by others," Levenson said. "Evolution seems to have tuned our nervous systems in ways that are optimal for these kinds of interpersonal and compassionate activities as we age."

In the first study, researchers looked at how 144 healthy adults in their 20s, 40s and 60s reacted to neutral, sad and disgusting film clips. In particular, they examined how participants used techniques known as "detached appraisal," "positive reappraisal" and "behavior suppression." Heading up that study was Michelle Shiota, now an assistant professor of psychology at Arizona State University. The findings were published in the journal, Psychology and Aging.

The researchers monitored the blood pressure, heart rates, perspiration and breathing patterns of participants as they watched a scene from the movie "21 Grams," in which a mother learns her daughters have died in a car accident; and from "The Champ," in which a boy watches his mentor die after a boxing match. They also watched repugnant scenes from "Fear Factor."

For detached appraisal, participants were asked to adopt an objective, unemotional attitude. For positive reappraisal, they were told to focus on the positive aspects of what they were seeing. And for behavior suppression, they were instructed not to show any emotion.

Older people, it turned out, were the best at reinterpreting negative scenes in positive ways using positive reappraisal, a coping mechanism that draws heavily on life experience and lessons learned.

By contrast, the study's younger and middle-aged participants were better at using "detached appraisal" to tune out and divert attention away from the unpleasant films. This approach draws heavily on the prefrontal brain's "executive function," a mechanism responsible for memory, planning and impulse control and that diminishes as we age.

The study concludes that, "older adults may be better served by staying socially engaged and using positive reappraisal to deal with stressful challenging situations rather than disconnecting from situations that offer opportunities to enhance quality of life."

In another study, published in the July issue of the journal Social Cognitive and Affective Neuroscience, researchers used similar methods to test how our sensitivity to sadness changes as we age.

In that experiment, 222 healthy adults in their 20s, 40s and 60s were wired with physiological sensors and instructed to view the same film clips from "21 Grams" and "The Champ." The older cohort showed more sadness in reaction to emotionally charged scenes, compared to their younger counterparts.

Contrary to popular belief, heightened sensitivity to sadness does not indicate a higher risk for depression in the context of Seider's study, but is actually a healthy sign, Levenson pointed out.

"Sadness can be a particularly meaningful and helpful emotion in late life, as we are inevitably confronted with and need to deal with the losses we experience in our own life and with the need to give comfort to others," Levenson said.