Drunken monkeys: what animals tell us about our thirst for booze

Ever since childhood, when he saw his father descend into alcoholism, evolutionary physiologist Robert Dudley has been curious about humans’ strong attraction to booze.

The notion crystallized one day 18 years ago in the monkey-filled jungles of Panama, when he observed an abundance of rotting fruit littering the forest floor, fragrant with the smell of alcohol. Perhaps, he thought, the odor of alcohol in fermenting, overripe fruit actually draws monkeys to the trees, normally hidden among the lush greenery, where nourishing fruit are most abundant. Maybe human attraction to alcohol is not unique in the animal world, and actually has a survival advantage.

Dudley, who specializes in the biomechanics of flight, spent the ensuing years accumulating evidence for this hypothesis, which he presents in a new book, “The Drunken Monkey, Why we drink and abuse alcohol” (UC Press 2014). He recently discussed his motivations for writing the book, the evidence that our attraction to alcohol is an evolutionary adaptation, and what this finding means for efforts to prevent alcohol abuse.

Q: What are you arguing in this book?

The argument here is that our attraction to alcohol goes back about 18 million years, to the origin of the great apes, if not 45 million years with the origin of diurnal fruit-eating primates. If you look at gibbons, chimps, gorillas and orangutans, they are just dedicated fruit eaters. Chimps, our closest relatives, are getting about 90 percent of their caloric expenditure from ripe fruits. And where there is sugar in the tropics, there is alcohol. Now, not a lot; it depends on how much you consume. They are not drinking down gin and tonics, but they are getting a long, sustained, low-level exposure.

So, I hypothesize that social facilitation of communication and food sharing and all these bright warm fuzzy feelings we get when we have a drink have basically evolved to facilitate rapid identification of fruit at a distance – you smell a plume, go upwind, and you get to the fruit. Fruit flies do it, we just don’t know if primates do or not. But they might. And once you get the fruit, you consume as much as possible before others do, or you share it with your close relatives, which is a well-documented behavior. The positive psychoactive effects of alcohol may simply exist to enhance the efficacy of these behaviors and, ultimately, they are the targets of natural selection.

It was kind of a fun realization that there is an ancestral, almost neurological bias associating ethanol with nutritional reward and caloric gain.

Q: Do primates get a buzz on?

No one knows. Primates are so hard to study in the field. We know they like alcohol. Darwin comments on consumption of alcohol by captive primates, which is well known. But captive monkeys eat diets imposed on them, so their preference for alcohol may not relate to natural preferences.

Q: What about other animals?

I get a lot of anecdotes about drunken animals. But it is so hard to know whether it’s natural, or whether they are drunk on the alcohol or the alkaloids in the fruits. There are no data.

We know, however, that other animals are exposed to alcohol. It has been known for a long time that fruit flies are attracted to alcohol vapor. They try to find fermenting fruit and lay their eggs on it, because that is what the larvae will cruise around in. The larvae also eat the yeasts that are producing the alcohol. And there is crazy stuff, like, male fruit flies that have just been rejected by a suitor are more likely to move to a high-alcohol containing fruit substrate. There are a lot of analogies between fruit fly and human behavior.

And there was a recently published paper on tree shrews and slow lorises in Malaysia, where there is a lot of alcohol in fermenting nectar of a night-blooming Malaysian palm, and where they are drinking lots of it. But they are never getting drunk. We have millions of species of nectar feeding insects and lots of birds, mammals and insects that feed on fallen and overripe or rotten fruit. All these nectar feeders are potentially getting exposed to chronically low levels of alcohol. 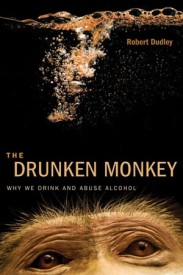 I wrote this book because we have little snapshots with fruit flies, tree shrews and, of course, all the human genetic variation in responses to alcohol but, I thought, maybe there’s a much broader set of questions. I call the field ethanology – the comparative biology of alcohol exposure. When I started this research, I thought, “This is definitely a new idea, but this is way out of my area.” But it is way out of anybody’s area. And it has potentially profound implications for human disease. So I thought, “Ah, just run with it and see what happens.”

Q: Why do we have a problem with humans over-consuming alcohol?

In the real world, animals stop feeding when their gut is full. If they are feeding on fermented fruit, they are going to saturate at a low level of alcohol. But modern humans have decoupled liquid alcohol from the solid substrate it would naturally be found in, starting about 12,000 years ago with the origins of agriculture. When distillation turned up about 700 or 1,000 years ago – it is very recent – then we got the high-concentration stuff. So now we have a high-concentration, high volume availability of alcohol. We can completely bypass any natural limits to consumption that might have been in place as a consequence of stomach design or physical availability. Now, we are in a demand-limited rather than supply-limited nutritional environment. That matches exactly with diabetes and other so-called diseases of nutritional excess. Our current food environment is very different from our historic nutritional environment. But our brains haven’t changed that much.

Q: What are the implications of this viewpoint?

I am not a clinician or a social scientist, but one thing is clear: by placing alcoholism in the broader context of diseases of nutritional excess, whatever works to fix diabetes and obesity incidence might be relevant. The only solutions that are going to be effective are ones that regulate supply, since we can’t change demand. Look at cigarettes, which represent one of the greatest public health triumphs in the United States. Nicotine is the only addictive substance we have succeeded in controlling by limiting the supply. They did a lot of public informational stuff, but most of this success came from increasing the price and making smoking socially unacceptable.

Telling college students not to drink is probably not going to be that effective. It hasn’t been for centuries. We have this intrinsic drive toward alcohol. It is a much deeper problem. It’s not just, “Don’t do this, and it’ll be fine.” That doesn’t work for junk food either. I don’t know what this means for policy. But I do want to understand whether there are any relevant pharmacological interventions, based on the natural biology of exposure to alcohol.

Q: What about other types of intervention, such as Alcoholics Anonymous?

The treatment of alcoholism is just totally hit or miss. The best treatments have success rates that are comparable to the spontaneous remission rate: about 10 percent of alcoholics just stop on their own. This is true as well for psychosocial treatments like AA. There’s a recently published book on AA that talks about the failure to advance beyond neutrality in terms of response. This is also a problem with some of the medicines that people try to use as well. One point I want to make about alcoholism, and the addiction response more generally, is the need to view them from an evolutionary perspective. That has been totally missing from the literature on addiction.

Q: In your book, you mention that there is alcoholism in your family.

Yes, my father was an alcoholic. He died prematurely because of it, at 58. He was not a high-level alcoholic, but he was institutionalized at one stage for six months. I saw it all: drunk driving, you name it. The irony is that he was a field botanist, one of five taxonomists at the U.S. National Arboretum in northeast Washington, D.C. I think I picked up from him the positives, like thinking about what plants are out there and what role they play in the ecosystem. He did a lot of field work in South America and China, and that is where I work most of the time, too.

Q: How did you come up with your hypothesis?

It was in Panama, where I lived for five years – I still go back every summer – at the Smithsonian Institution’s main field station on Barro Colorado Island. There are five species of primates on the island, and you’d see all the time these fruit eaters – the white-faced monkeys and the spider monkeys. It was a combination of long term exposure to the foraging biology of monkeys in the field, and the nicest experience in the world, which is sitting on the veranda at 5:30 p.m. with a rum and Coke in hand, watching the sun go down. I remember thinking once, “What is it about humans and alcohol, and this triangle of monkeys, fruit and alcohol fermentation? Maybe it is just an ancestral association of fruit-eating with alcohol production by yeast.” Then, my immediate next thought, which I remember even more clearly, was that this is a real simple and obvious idea that has been thought of before. I spent about two years, 1997 and ’98, doing the background reading. The first drunken monkey paper was published in 2000.

Q: What has been the response to your new book?

Everything I hear is positive. I am reporting the facts and ending up with a series of questions. Some colleagues, like Katie Milton here at UC Berkeley – she’s the world’s authority on howler monkeys – argue that we just don’t know what alcohol is out there relative to what primates are eating. That is absolutely true. We need more data points.

We are trying to find out what fruit is available in the environment, its ripeness and alcohol and sugar contents, and then what the primates are actually eating. I have a student going down to Panama this summer to do more measurements on how much alcohol is in ripe palm fruit. And then I have another collaborator who is actually trying to look at alcohol in urine samples from spider monkeys.

Ultimately, though, if you want to learn about human evolution, you need to study chimpanzees. Spider monkeys in Panama are good, but they are New World primates, not great apes. My plan in the next couple of years, if I can get the funding, is to go to Uganda and look at what chimps are eating and how their alcohol-degrading enzymes are acting relative to their capacity for alcohol ingestion, and to look at their metabolism.

My first goal was to get the book out. It was a seven-year effort. Now that the book has sort of crystallized the field, with luck, the research funding will start to turn up.