Anyone with Internet access can generate online content and influence public opinion, according to popular belief. But a new study from the University of California, Berkeley, suggests that the social Web is becoming more of a playground for the affluent than a digital democracy. 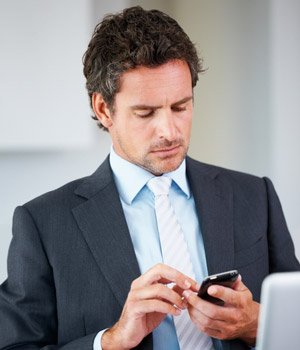 Despite the proliferation of social media  – with Twitter and Facebook touted as playing pivotal roles in such pro-democracy movements as the Arab Spring –  the bulk of today’s blogs, websites and video-sharing sites represent the perspectives of college-educated, Web 2.0-savvy users, the study says.

“Having Internet access is not enough. Even among people online, those who are digital producers are much more likely to have higher incomes and educational levels,” said Jen Schradie, a doctoral candidate in sociology at UC Berkeley and author of the study published in the May online issue of Poetics, a Journal of Empirical Research on Culture, the Media and the Arts.

Schradie, a researcher at the campus’s Berkeley Center for New Media, analyzed data from more than 41,000 American adults surveyed between 2000 and 2008 in the Pew Internet and American Life Project. She found that college graduates are 1.5 times more likely to be bloggers than are high school graduates; twice as likely to post  photos and videos and three times more likely to post an online rating or comment.

Overall, the study found, less than 10 percent of the U.S. population is participating in most online production activities, and having a college degree is a greater predictor of who will generate publicly available online content than being young and white.

The results suggest that the digital divide for social media users is wider between the haves and have-nots than it is between young and old, and underscore growing concerns that the poor and working classes lack the resources to participate fully in civic life, much of which is now online. That chasm is unlikely to break down until everyone has a host of digital production tools at both home and work, Schradie said.

“Conventional wisdom tells us that the Internet is leveling the playing field and broadening the diversity of voices being heard,” Schradie said. “But my findings show the Internet is actually reinforcing the socio-economic divisions that already exist, and may even heighten them, which has all sorts of implications as more of civic and economic life moves online.”

Since the early 1990s, the Internet has been billed as the greatest agent of change since the Industrial Revolution. With the 2004 launch of Facebook and the 2008 creation of the microblogging site Twitter, user-generated content has exploded with an estimated 2 billion social media users worldwide.

Previous data gleaned from the annual Pew Internet and American Life Project have shown that Americans in higher-income brackets are more likely to have broadband access and mobile devices and thus use the Internet more often. 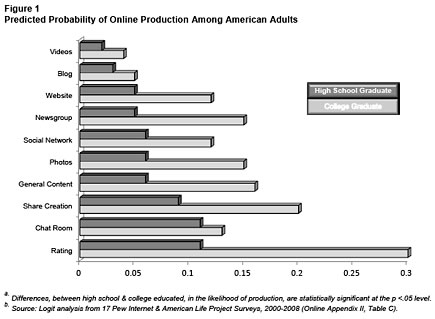 However, Schradie’s latest study breaks new ground in that it tracks the relationship between socio-economic status and 10 online activities most likely to influence the public, opinion shapers and policy makers. Among those uses are such social networking activities as Facebook; website building and design; blogging; photo-and video-sharing, such as on YouTube; chat room and newsgroup participation; and the posting of comments and ratings.

In 17 surveys, she tracked the demographics of users, including education level, income, gender, race and ethnicity.  Despite users’ racial, ethnic and gender differences, all 10 online activities showed a socio-economic class divide.

Many observers of social media assume that participation rates will increase as younger generations, known as “digital natives,” embrace new technologies and modes of communication. But by tracking 10 different activities over time, the study shows strong patterns of inequality that are not likely to disappear when the next social media tool appears, Schradie said.

“The working class is underrepresented on the Internet,” the study concludes. “Without their voices, their issues are ignored.”