A Different Kind of Language Syllabus

By: Kate Rix, College of Letters and Science 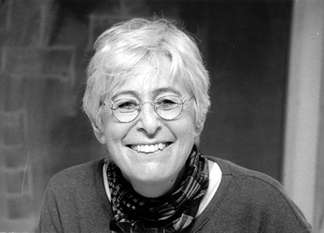 Professor of German Claire Kramsch was sitting in her kitchen writing her most recent book, The Multilingual Subject, when she had an out-of-body experience.

“On the radio I heard the President talking on anniversary of the 9/11 attacks,” recalls Kramsch, “and I thought, ‘Oh, those poor Americans. How horrible that all must have been for them.’”

For just a moment, seated at the kitchen table in her house in Paris listening to President Obama’s speech translated for French radio, Kramsch felt detached from her experience as an American. Though she had been home in the U.S. when the 9/11 attacks took place, hearing about the event later in French briefly stripped 9/11 of its historical and symbolic meaning, becoming, merely, le onze septembre.

“When it is said in French, it is a date on the calendar, disassociated and lacking in any ideology,” Kramsch says. “The experience only lasted a few seconds, but it is what language learners experience all the time in the classroom.”

Kramsch teaches in the Graduate School of Education and was founding director of the Berkeley Language Center. She is a specialist in applied linguistics with a particular emphasis on how language is learned. In the new book she tackles the subject from a more personal angle, looking at how language students build an intimate relationship with a new language, making meaning of new words by reconciling nuanced differences in meaning and sound between languages.

“When an instructor is working with students, the native language is not left at the door. It is always there, introducing new ideas. They are learning that in one language death is masculine, and that in another it is feminine. Students are forever crossing over between languages,” Kramsch says.

Her approach is unique in the existing scholarly literature about language acquisition. So much so, that she received this year’s prestigious Kenneth W. Mildenberger Prize, given annually by the Modern Language Association. Kramsch’s research into why the inner experience of language learners matters offers recommendations to the field of teaching.

The dominant approach today is total immersion. The mother tongue is excluded from the pedagogy,” Kramsch says. “I want to bring it back, not as a crutch, but as a way of appreciating what one language says as opposed to another. In this way, instructors can help students engage that gap between the native tongue and the new language.”

In her book Kramsch refers to a space within a student where they may realize that there is no direct translation for a word from one language into another — that there is cultural and philosophical nuance that simply cannot be captured on vocabulary lists.

“There is a space, within words and outside of them, where we are not at the mercy of one vocabulary,” she says. “It can be 9/11 and le onze septembre. We can step out of one ideology and look at things in different ways.”

For her book Kramsch consulted the memoirs of Eva Hoffman, who describes the loneliness of learning English as a Polish immigrant in Canada, of Descartes scholar Richard Watson’s struggle learning French, and other personal accounts.

She also collected stories from students. One was from a young Korean woman who grew up speaking English. At Berkeley she began studying French and fell in love with the language, continuing for six semesters.
“She told me, ‘When I am speaking French, I think differently.’” Kramsch recalls. During her studies, the student read Camus’s L’Etranger, which follows the experiences of a Frenchman after he commits a murder. At the end of the book, the Frenchman faces the death penalty and the class discussed capital punishment — in French.

“She told me, ‘I was totally against the death penalty and I was so surprised at myself. In my normal life I am in favor of the death penalty, but in French it is la peine de mort (the pain of death), which is worse than ‘the death penalty’. I don’t know myself anymore.’”

Other students described liking the feeling of speaking a new language and even liking themselves better in a new language. One student said she was studying German not for any career-related reason but so that she could experience the memories of an affair with a German man over one winter.

“She wanted to learn the words for church bells and German cookies and snow,” Kramsch recalls. “We teach languages so our students can communicate, but why don’t we use a little more poetry and song and ask our students what their favorite words are? This young woman wanted to speak German so she could be reminded of her lover.”

This emotional, human aspect to language learning ought to be integrated into instruction, she continues. Exercises like translation — unpopular today in language teaching — would make the interaction between native tongue and new language more explicit. Instructors should slow down, Kramsch says, and even encourage students to re-read material.

“There is a lot of pleasure in re-reading books. The body has a memory and it needs time to remember and identify new things,” she says. “By learning more than one language we become sensitive to the way things are said. We realize what we’re missing by not understanding even more languages. The minute we learn another language, we realize that there is more than one way of looking at the world.”