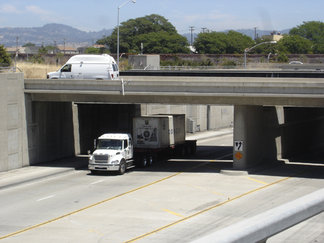 West Oakland’s 22,000 residents live beside three freeways, two rail yards, and the nation’s fifth busiest container port—a destination for thousands of diesel trucks hauling goods back and forth daily while spewing pollutants into the neighborhood around them.

According to a 2008 health risk assessment by the California Air Resources Board, diesel particulate matter (PM) emissions from Oakland’s port operations, the rail yard, and the freeways result in 1,200 excess cancers per million for residents of West Oakland. The report further states that diesel PM is responsible for higher premature deaths and hospital admissions for respiratory and cardiovascular disease, as well as asthma-related and lower respiratory symptoms. Diesel trucks are by far the greatest contributor to these emissions, compared to trains, cargo handling equipment, and ocean going vessels.
So imagine reducing emissions of unhealthy pollutants from these trucks by half—in a matter of months.
Civil and Environmental Engineering Professor Robert Harley says recent field studies his research team has undertaken show that’s just what has happened as a result of state regulations that banned the oldest, dirtiest trucks and set deadlines for retrofitting middle-aged trucks with diesel particle filters.
The results have been heartening, and in at least one way, unanticipated.

“We expected black smoke to be lower,” Harley told the Berkeley Transportation Letter. Black smoke, also known as black carbon or soot, is a major component of diesel particulate matter (PM) emissions. PM is a broader term that also includes other substances, such as lubricating oil and mineral ash emissions.
“The surprising thing was that gaseous nitrogen oxide emissions, which contribute to the creation of smog, went  down as well. We didn’t foresee that NOx would change—at all.”
The program that accomplished so much so fast gained traction in 2010, when the state’s strict diesel emission control regulations went into effect for all diesel trucks making trips to or from California ports or rail yards. As a first step, the California Air Resources Board banned all 1993 and older drayage trucks from ports and rail yards statewide beginning in January, 2010. Those trucks could not be retrofit with diesel particle filters (DPF), which can reduce exhaust particulate matter emissions by 90 percent or more.
Truckers with these very old vehicles had a choice: buy a 2007 model or newer truck, which come with filters built in, or buy a “middle-aged” truck, one manufactured after 1993, and then install the particle filter. Neither option was cheap. New trucks typically cost $100,000; the filters themselves run about $15,000.
While it was a hardship for some truckers, the Air Resources Board and other agencies involved offered a grant program to help mitigate costs. By the middle of 2010, owners of truck models from 1994 to 2003 had installed the required filters, bought a newer truck, or moved elsewhere.
By the end of 2011, the 2004 trucks had been retrofit or replaced. By the end of this year, owners of all 2005 and 2006 models must install the filters. By 2013 all port trucks must meet the 2007 engine emission standard.
Harley and his team of researchers measured emissions from trucks as they drove to the Port of Oakland, before the emission control program began in November 2009, and again in June 2010 after the new program was in effect.

After the first phase of the emission control program took effect in early 2010, black smoke emissions were reduced by about half. NOx emissions also dropped by 40 percent.

Each morning the research team drove a specially-equipped white van from the campus to an overpass above West Oakland’s 7th Street, a four-lane arterial that connects the port with nearby Interstate 880 and carries a high volume of port-related trucks.
In a paper  published in Environmental Science & Technology, Harley and co-authors CEE Ph.D. student Tim Dallmann and Lawrence Berkeley National Laboratory research scientist Tom Kirchstetter describe how they captured and measured the exhaust of trucks driving below the overpass. Air was sucked in through aluminum ducting to a manifold inside the van where pollutant analyzers could rapidly measure concentrations of CO2, NOx, black smoke, and a broader measure of particulate matter (PM2.5) as trucks passed by below. A video camera recorded individual trucks passing under the van.
After the first phase of the emission control program took effect in early 2010, black smoke emissions were reduced by about half.
NOx emissions also dropped by 40 percent. Harley suspects that the decision by many truckers to replace older vehicles with those manufactured after 2003, which produce lesser amounts of NOx, led to the surprising reduction in those emissions.
The alternative to this accelerated program of retrofitting was to allow older trucks to gradually be replaced by newer ones, a process that could take at least a decade instead of a few months.

Learning from the tunnel

Harley was particularly suited to this type of field research. In the early 1990s as a young assistant professor he began measuring emissions inside the East Bay's Caldecott Tunnel. He focused first on the middle bore, which did not allow heavy-duty trucks. Over time, his measurements showed a dramatic improvement as reformulated gasoline and improvements in engines and emission control equipment led to fewer harmful emissions in this group of vehicles.
“Then we started taking some measurements at Caldecott in another set of lanes where there was a mix of cars and heavy-duty diesel trucks present, and we were really struck by how much higher the diesel emission rates were for soot, PM and NOx,” he said.
“So as we watched, over the years the emissions from light-duty vehicles were going down but we also saw how dominant these diesel trucks had become as a source of NOx and black carbon.”

Ironically, the oldest and dirtiest trucks are operating in more populated areas like cities where their pollutants have the greatest impact on populations.

Policy makers, too, began to take note and eventually new national standards emerged for truck emissions. But trucks are built to drive long distances and have long service lives; turnover could take many years. Recent surveys found trucks from the 1970s still working the Port of Oakland before Harley began his field research there.
“Some of these trucks are still running with more than a million miles on them, which means turnover can easily take a decade or more,” he added.
And ironically, the oldest and dirtiest trucks are operating in more populated areas like cities where their pollutants have the greatest impact on populations. The big interstate trucks, whose owners can’t afford costly breakdowns in the middle of nowhere, are typically newer and therefore, cleaner.
“Historically, there were a lot more cars, so that was the logical place to begin controlling emissions. But automobiles have really been cleaned up now, so attention is being turned to the uncontrolled or less controlled sources and a big part of that is diesel: both on-road and off-road.”
In recent years, new rules have sharply reduced emissions from ships in the port or near the coast of California, said Harley. Instead of burning heavy fuel oil, they must now use lighter diesel fuel, which is much cleaner, or plug into shore power while docked.

Harley and his researchers will return to the port area several more times over the next two years as the remaining 2004-2006 truck engines are retrofit with filters. They expect to study in greater depth the properties of emitted particulate matter. “We’ll be looking at the numbers of particles emitted and their distribution as a function of how large the particles are. So we’ll be classifying and counting the number of particles in addition to measuring the total mass,” Harley explained.
They will also examine more closely the chemical composition of the NOx emissions to determine the split between nitric oxide (NO) and nitrogen dioxide (NO2).
“Many diesel particle filter systems deliberately convert NO present in engine exhaust to the more oxidized form (NO2),” he said. “NO2 in turn is used to oxidize particles trapped on the exhaust filter, to prevent the filter from getting plugged up. Increased direct emissions of NO2 from trucks pose a concern because this may contribute to other local and regional air quality problems.”
He’s also interested in the durability of particle filter systems as the trucks start aging.
“How well will they hold up? How well will they perform after a couple of years? That’s an important aspect of sustaining these benefits over the long term.”
California has had a long-standing role as a national laboratory for experimenting with air pollution control. This diesel emission control program will go statewide to all trucks over the next several years—even trucks from out of state, Harley explained.
The rest of the country "might want to think about what California is doing and whether these kinds of accelerated clean-up measures make sense nationally, rather than waiting for trucks to be replaced gradually as they age," he added.
“The port is an accelerated view of what’s going to happen in California. And California is an accelerated view of what’s going to happen nationwide.”
For the residents of West Oakland it’s like a breath of fresh air.