Despite drift toward authoritarianism, Trump voters stay loyal. Why?

More than a month has passed since the fiercely contested U.S. presidential election, and the nation’s institutions are moving day-by-day toward acceptance of the outcome that made Democrat Joe Biden the winner over incumbent Republican Donald Trump. But Trump is neither conceding nor moving on — and, it appears, the same is true for millions of his supporters.

The numbers, presumably, don’t lie: Results certified by officials from both parties show Biden defeated Trump by more than 7 million votes. Since the polls closed, however, Trump has blitzed the nation with unproven claims that he was robbed of victory by widespread fraud, and today only 15% of his 74.1 million voters say Biden’s win is legitimate. 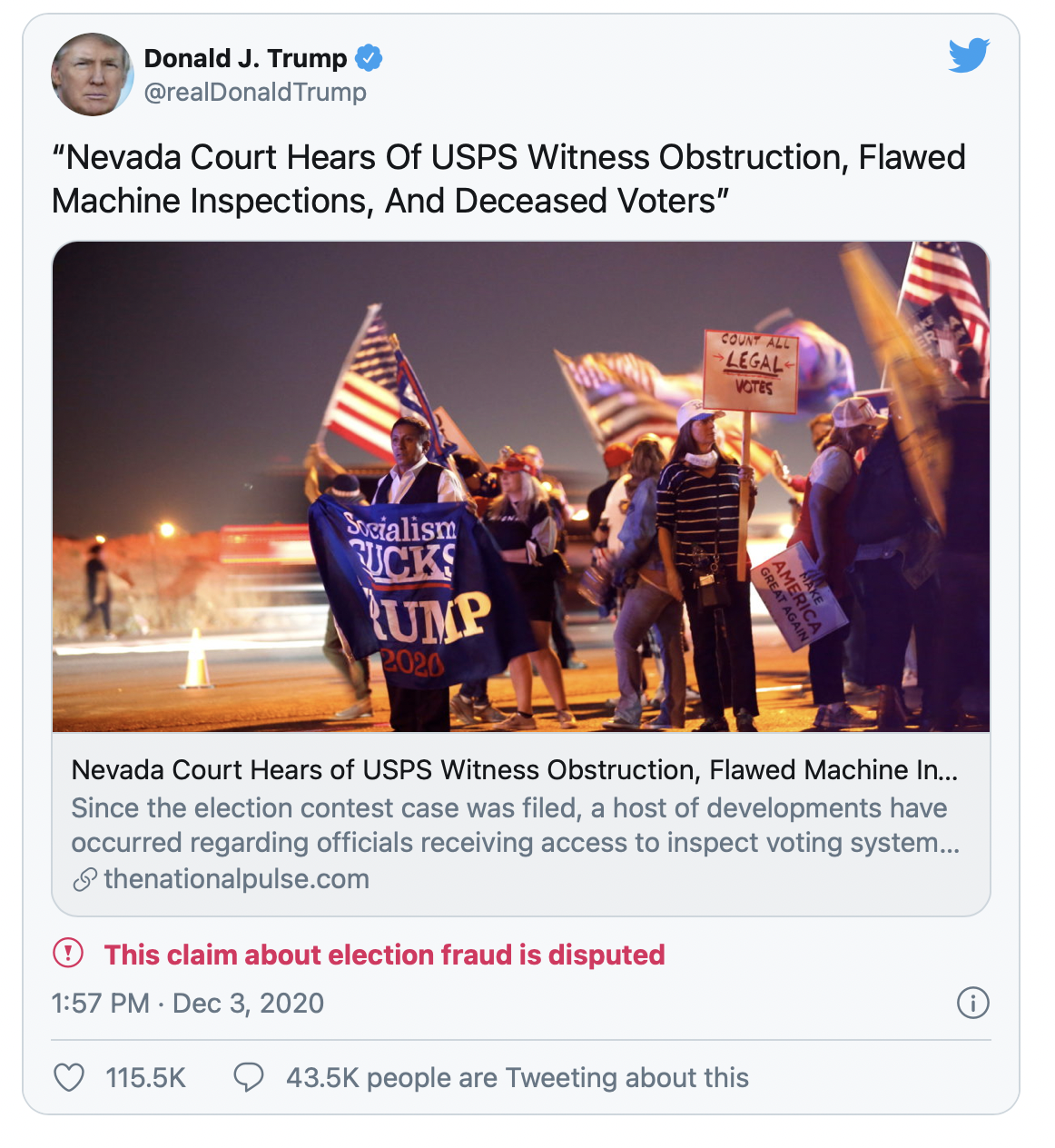 How do we explain this seemingly mass rejection of democratic processes — and the rejection of verified reality? In a series of interviews, Berkeley scholars across a range of disciplines suggested that this is a story not just of numbers, but of a complex interplay of class and racial antagonism, aggravated by despair and social drift and amplified by new communication platforms, converging to what some see as a troubling psychological phenomenon.

Some suggested that generations of creeping economic insecurity have inspired deep anger, compelling many voters in the white middle and working classes to embrace Trump, flaws and all, because he challenges the American status quo.

Adam Jadhav, a Ph.D. student in geography, traveled to rural Henry, Illinois, where he lived as a child, for research that explored the dynamics of rural populism. While the picture there is complex, he said, one hard-line conservative was blunt:

Votes for Trump were “a hand grenade for the establishment,” he told Jadhav. “Trump does some stupid ass things, says a lot of stupid ass things, doesn’t keep his mouth shut when he should. [But] it was worth it to try to shake the system.”

Others see a loyalty to Trump that is so intense, and so unshakeable, that it exerts a cult-like gravity.

“Trump has claimed that he’s the ‘chosen one,’” said Jennifer A. Chatman, an influential researcher on leadership and organizational cultures and associate dean at the UC Berkeley Haas School of Business. “He’s said he’s super-smart, a genius. … He has established his image as the leader who is cleaning up Washington and the savior of the common person so convincingly that none of his supporters are looking beyond that to see that, in fact, many of the things he’s doing are exactly the opposite.”

How ‘rational ignorance’ shapes our politics

To understand why so many voted to re-elect Trump after four years of historic political turmoil — featuring a failed pandemic response, a devastating economic shock and a crisis in racial justice — it’s necessary to understand the forces that propelled him to victory in 2016.

In recent publications, Berkeley scholars have suggested that Trump won with an unconventional coalition of white working class and middle-class Americans who were motivated by resentment: The culture and economy gave them no recognition and no respect for their work. Their industries were changing, their jobs were shifting overseas or lost to automation. They perceive that Black, Latinx and Asian people, and immigrants, are advancing at their expense.

But some Berkeley scholars suggested that for many voters, support for Trump — or any leader — is a more passive choice that takes shape in a subrational sphere.

Gabriel Lenz, an expert in political psychology, is the author of Follow the Leader? How Voters Respond to Politicians’ Performance and Policies (University of Chicago Press, 2012). He sees political opinion shaped by a force that is almost prosaic: an apathetic lack of awareness.

Many people follow a political party as they would a football team, researchers say. Values may be less important in shaping allegiance than family tradition or the shared identity and social pressures of a community.

Most low-engagement voters simply follow the cues of their preferred party leaders. If a popular leader fans division, they polarize. If the leader appeals to emotions such as sadness or anger, their passions are aroused.

Lenz and other political scientists call it “rational ignorance.”

“It’s hard for political junkies to believe,” Lenz said, “but most people have much better things to do with their lives than pay attention to politics. If you ask, ‘How, after the last four years, could people want more of this?’, well, people are partisan. The country is polarized. And it’s not clear that people are paying much attention to the details.”

Despite reams of journalism exploring the impact of Fox News and the right-wing media ecosystem, Lenz said, relatively few people actually tune in. In fact, people often don’t understand politics or policy well at all.

He points to 2018 research co-authored by Douglas J. Ahler, a former Berkeley Ph.D. student now on the faculty at Florida State University. The research concluded that many voters don’t grasp even the basic character of Republicans and Democrats.

“People make large, systematic errors when judging party composition,” Ahler wrote with co-author Gaurav Sood, an independent social scientist. “For instance, Americans believe that 32% of Democrats are gay, lesbian or bisexual (only 6.3% are, in reality), and that 38% of Republicans earn over $250,000 per year (just 2.2% do, in reality).”

“The democratic freedoms and values that we have in this country — that’s not something that people think about on a daily basis,” Lenz explained.

When a popular leader continually employs division and misinformation to promote his goals, loyalists can drift from democratic standards — and from fact-based reality.

Chatman, the Berkeley Haas leadership expert, trained as a social psychologist. Research, she said, has shown that people can be persuaded by the stories that leaders tell. If a leader makes an appealing promise, people will remain loyal, even if the leader doesn’t deliver.

Trump, Chatman explained, “has framed a narrative that says, ‘I’m the turnaround guy. I’m going to drain the swamp. I’m going blow Washington up.’ And so anyone who was disaffected about government, which turns out to have been a lot of people, likes that narrative.”

How far does that influence extend?

Exhibit A: QAnon is a bizarre conspiracy cult united in the belief that Trump is defending the world against a vast network of Satanic pedophiles — including Democrats, Hollywood stars and others in the “deep state” — who are attempting to traffic in children and generally to threaten freedom. Trump has welcomed QAnon support and sometimes retweets their communications.

One recent poll found that 56% of Republicans now believe that the improbable QAnon conspiracies are somewhat or entirely true. Only 4% of Democrats agree.

In Chatman’s view, Trump is a narcissist — his actions are principally devoted to advancing his own popularity and power. And psychological processes called “habituation” and “escalation of commitment” bind the followers to their leader, she said, giving Trumpism itself some qualities of a cult.

“Every time a person stays after one of those infractions, it’s harder for them to pull out the next time,” she said. “They have an increasing set of commitments, and if they pulled out, they’d have to say to themselves, ‘Was I stupid before? Was I blind?’

“It’s much easier and more cognitively consistent to stay in and say, ’Oh, the media, the Democrats, they’re not giving him a fair shot.’ …. That’s why we don’t see any movement in the Trump base.”

American heartland: the shock of being left behind

In 2017, when Adam Jadhav returned to his old home town of Henry, Illinois (pop. 2,200), his research found some of the maladies described by Lenz and Chatman. Some people longed for better days gone by. Some younger men were “seething” because they no longer had a place in the local economy.

But in article published recently in the Journal of Rural Studies, he described something more subtle: a quiet despair in farm country.

Not so long ago, Henry was an economic hub in central Illinois. There were healthy family farms, and industries associated with the farms — Caterpillar Inc. machinery factories, tire factories. And the town was 99% white, which allowed an unchallenged racism. Jadhav was harassed because his father, the United Methodist minister, was an Indian immigrant.

In recent decades, change has swept through Henry like a prairie storm. The economy has devolved. Opportunity, wealth and people — especially young people — have fled to bigger cities. Shops have closed. Churches have closed. And the people left behind mourn for what’s been lost.

When Donald Trump ran in 2016, Jadhav said, the slogan “Make America Great Again” found an audience. It’s not that Trump was popular — to many, Jadhav said, he seemed “a horribly flawed candidate.” Still, Trump spoke to their values and insecurities, and Hillary Clinton didn’t.

“Rural voters who have been told for generations that the urban ‘other’ is getting ahead of them, unfairly taking their hard-earned opportunity — those folks,” Jadhav said, “probably spent the last four years feeling like their guy was under assault, even if they didn’t like their guy.”

What comes next, now that Trump has lost? Jadhav is of two minds.

He talks tentatively of “battle lines being hardened,” and says: “I think we should see this now as a new phase in a low-grade civil war.”

But at the same time, his research in 2017 found that people were welcoming, though wary, as Mexican, Indian and Filipina residents brought new economic life to Henry. And today, the Facebook pages of Henry contacts suggest they’re turning the page on Election 2020.

“The latest posts have been of Veterans Day photos and Thanksgiving photos and duck hunting photos,” he said. “It seems fair to say most people are getting on with their lives.”

The road to renewal is economic, and spiritual

Conservative author Steven Hayward, a Berkeley Law lecturer and visiting scholar at Berkeley’s Institute of Governmental Studies, looks to the past for a guide to the future. The late 1960s and early ‘70s were a time of upheaval in the U.S., he said, and the nation was shaken by assassinations, bombings, riots and campus unrest. Eventually, though, much of the fury burned itself out.

Hayward believes that many working class people embraced Trump because he seemed to understand their sense of being left behind. But like other scholars, he suggested the Biden administration will be more conventional, bringing a calm that could reduce the “exhausting” polarization and conflict of the Trump presidency.

Several scholars, however, suggested that Democrats hold some responsibility for the repairing the cultural divide — because they helped to cause it. They have increasingly lost a sense of alliance with people in rural America and the declining industrial regions, said Berkeley sociologist Neil Fligstein, and as a result, they’re seen as distant, arrogant elites.

“People are concerned about having a job and paying their rent,” said Fligstein, a specialist in economic sociology. To restore the connection, he said, Democrats might advance a national $15-an-hour minimum wage and infrastructure investment that creates jobs and environmental benefits.

“We need to rebuild our entire electricity system,” Fligstein said. “We need to invest in putting up windmills and then retrofitting homes and buildings for energy efficiency. We need to rebuild the highway system. Trump said he was going to do that, and it’s still very popular. And all of that is labor-intensive.”

Jadhav, meanwhile, goes beyond the political and economic to something nearly spiritual.

Rural America — Trump’s country — must reflect on its own problems and the path to renewal, he said. To do that, it has to cast off its faith in unregulated capitalism, its reflexive hostility to government and its white supremacy.

At the same time, he sees an essential need for engagement between coastal people and heartland people, metropolitan people and rural people.

Without that, Jadhav sees “a slow-rolling catastrophe,” with conflicting American cultures battling nonstop through one election cycle after another — and losing the opportunity for progress.

“I hate to use cancer metaphors,” he said, “but American politics has a deep-rooted metastasis. You can’t ignore it. And pretending it’s not cancer will not make it go away.”