In a desert seared by climate change, burrowers fare better than birds

In the arid Mojave Desert, small burrowing mammals like the cactus mouse, the kangaroo rat and the white-tailed antelope squirrel are weathering the hotter, drier conditions triggered by climate change much better than their winged counterparts, finds a new study published today in Science.

Over the past century, climate change has continuously nudged the Mojave’s searing summer temperatures ever higher, and the blazing heat has taken its toll on the desert’s birds. Researchers have documented a collapse in the region’s bird populations, likely resulting from many bird species’ inability to withstand these new hotter temperatures

However, the same team that documented the birds’ decline has now found that small mammal populations in the desert have remained relatively stable since the beginning of the 20th century.

Using computer models to simulate how birds and mammals respond to heat, the study team showed that small mammals’ resilience is likely due to their ability to escape the sun in underground burrows and their tendency to be more active at night. As a result of these behaviors, small mammals have much lower “cooling costs” than birds, which have less capacity to escape the desert heat and need extra water to maintain a healthy body temperature.

“Scientists tend to assume that most species in a region experience the same exposure to temperature or precipitation changes, and that they all respond in the same way. But we’re finding now that animals have diverse strategies for reducing their exposure to hot and dry conditions that could kill them,” said study senior author Steven Beissinger, a University of California, Berkeley, professor of environmental science, policy and management and a researcher at the campus’s Museum of Vertebrate Zoology. “You should see these differences most strongly in a harsh environment like the desert, where life is really on the edge.”

The findings are part of UC Berkeley’s Grinnell Resurvey Project, an effort to revisit and document wildlife at sites in California first studied by UC Berkeley biologist Joseph Grinnell and his colleagues at the Museum of Vertebrate Zoology between 1904 and 1940. Grinnell’s detailed field notes of the animal and plant life of the early 20th century have given modern-day biologists a glimpse into the ecology of the past, allowing them to document how climate change has impacted wildlife throughout the state.

“It’s becoming clear that animals across the planet are responding to climate change by shifting where they live and shifting when they breed, and we’re starting to get really strong evidence of population declines in certain areas that may be associated with warming,” said lead author Eric Riddell, an assistant professor of ecology, evolution and organismal biology at Iowa State University. “Some estimates now suggest that one in six species will be threatened by climate change over the next century. Figuring out which species those are, what kind of traits they have, will be critical.”

In recent years, the Grinnell Resurvey Project has turned its focus to ecological change in the Mojave Desert, an area in Southern California and Nevada that is home to Death Valley and Joshua Tree national parks and the Mojave National Preserve. As a whole, the desert has seen an approximate 2 C (3.6 F) increase in average mean temperature and a 10 to 20% decrease in precipitation over the last century.

“Desert species have been thought to be relatively invulnerable to climate warming, but many desert species are already at or near their temperature and aridity tolerance limits. Each species also has different degrees of resilience,” said study co-author Lori Hargrove, an ecologist at the San Diego Natural History Museum. “Climate change may seem minor, only a few degrees, but it has already had, and is having, direct and significant impacts on many species, each of which, in turn, affects other species, with cascading effects yet to be realized.”

The past and present Mojave

While there was no such thing as GPS when Grinnell and his colleagues conducted their surveys, they left behind detailed field notes of landscape features like hills, mountains and streams, that have allowed current day scientists to pinpoint their locations to within less than a kilometer, even in desolate regions like the Mojave Desert.

“Sometimes they were very nice and left topo maps, but sometimes you have to do a little detective work,” said Beissinger, who leads the Grinnell Resurvey Project. “For instance, they will say, ‘We sampled at Horse Mountain.’ Well, there are three Horse Mountains in California. So, we track down the Horse Mountain in the study region. And then you find out that they camped at the mouth of a creek. So, then you look at the old topo maps, and you see the creek. Using these details, we’re able to recreate more or less where they were.” 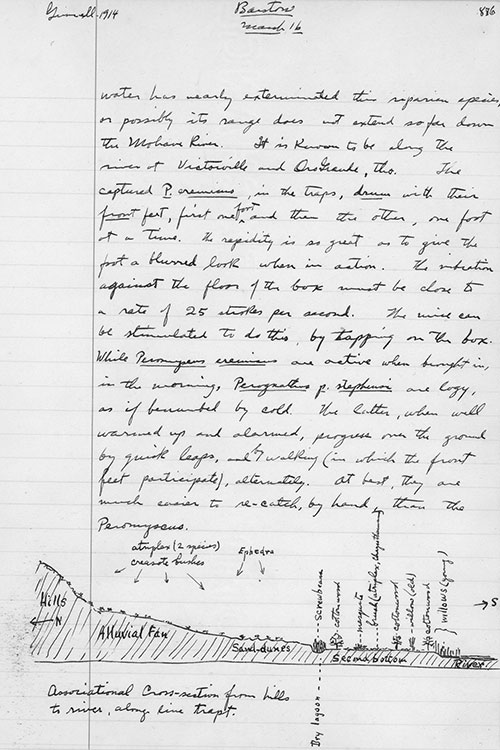 Once the researchers identify a location, the next step is to take stock of what animals live there. To survey bird populations, researchers will pick a specific trail or route to walk for 1.5 miles and stop at defined intervals to record all the birds they see — or, more likely, hear.

“You have to know your bird songs,” Beissinger said.

Small mammal surveys are a little trickier. Because small mammals are often more active at night and usually spend the daylight hours hiding away in burrows, researchers rely on live traps to get an idea of which animals are around.

Co-author James Patton, a professor emeritus of integrative biology and curator in the Museum of Vertebrate Zoology at UC Berkeley, led the trapping efforts with his wife, Carol, in Mojave’s Death Valley National Park. To sample a given location, Patton said that they would set a series of approximately 200 traps each night for four or five nights and record what they caught.

“To be a fieldworker, you have to have sufficient experience with the local fauna to know that you’re sampling the diversity of habitats that are actually occupied. That means variations in plant community and substrate, such as whether the ground surface is sandy, rocky or hardpan,” said Patton, who has been involved in the Grinnell Resurvey Project since its inception in 2003.

Researchers on Beissinger’s team have adapted statistical models that account for differences in survey methods and detection between Grinnell’s time and today, allowing them to directly compare species diversity and prevalence between the early 20th century and now. The new study’s findings are based on multiday surveys of 34 small mammal species at 90 sites and 135 bird species at 61 sites located primarily on Mojave Desert protected lands and national parks.

In 2018, the team reported its findings that bird populations have declined precipitously, with the 61 sites losing, on average, 43% of the species that were there a century ago. However, according to the new trapping data, small mammal populations have not significantly changed since then.

“Mammals have shown this remarkable stability,” Beissinger said. “It’s really quite interesting that, in the same region, with the same level of climate change, these two very similar taxa have responded very differently to the changes taking place.”

Desert animals have devised a variety of tricks for staying cool in the dry heat. Unlike humans, birds and small mammals do not sweat. However, some rely on other methods of evaporative cooling, such as panting or “gular flutter,” a vibration of a bird’s throat muscles that increases air flow. Others will avoid the heat by staying in the shade, or building dens or burrows to hide from the sun. Some avoid the heat of the day altogether by being nocturnal.

As a postdoctoral researcher at UC Berkeley, Riddell built computer models of 49 desert birds to calculate each species’ body temperature and cooling needs under different desert conditions. Birds that the model predicted would have the greatest increase in cooling costs were also the ones that showed the greatest losses in field surveys — particularly larger birds, and those that have an insect or animal diet.

For the new study, Riddell built additional physiological models, this time for small mammals of the desert.

“The simulations estimate the head loads that animals experience and then calculates how much heat they need to gain or lose to maintain a stable body temperature,” Riddell said. “It’s very similar to how your house controls the temperature. You probably want to keep your house temperature pretty constant throughout the seasons, and keeping your house warm or cool depends on what your house is made of: What are its properties? How thick are the walls? How much sun hits it? These are the types of characteristics that I measured for birds and mammals.”

For instance, he said, a black crow will absorb more sunlight than a lighter colored bird. However, the shape of the animal, the thickness of the plumage or fur and the length of the individual fibers will all determine how much sunlight is able to pass through the feathers and hit the skin of the animal.

For small mammals, Riddell was also interested in how quickly heat is able to transfer through their fur. To calculate this, he used specimens currently stored at the Museum of Vertebrate Zoology. By placing the fur samples on a heated device, and placing thermocouples at the tips of the hairs, he was able to get an estimate of each animal’s thermal conductance.

“Thermal conductance is basically how quickly something transfers heat with its environment,” Riddell said. “A big, fluffy mammal might transfer heat very slowly, whereas an animal with very sparse or short fur, like a ground squirrel, might transfer heat quickly.”

This was largely due to the fact that the small mammals can retreat to underground burrows during the hottest parts of the day.

“A lot of the difference in cooling costs is related to what we call microhabitat differences. Small mammals are able to go underground where it is much cooler, and they’re not being exposed to the direct sunlight, which heats up the bodies of the birds,” Beissinger said. “These microgeographic variations in their exposure make a big difference, and these variations need to be considered when we think about how climate change will impact individual species.”

To prevent further losses, Beissinger says it will be important to identify local refuges in the desert where species will be able to maintain themselves when temperatures soar. Reducing the demand on aquifers in the region may also prevent more desert springs from drying up, returning more water to the parched landscape.

“This study has made me realize just how complicated predicting the effects of climate change truly are,” Riddell said. “It isn’t just about where the landscape is warming and where it isn’t warming. It’s a really complex process that involves many aspects of an organism’s biology, including their physiology, their behavior, their evolution — it’s all coupled. You need to take a really integrative approach to understand it.”