Thirty years ago, in the early days of December 1991, the vast communist empire of the Soviet Union formally and unceremoniously collapsed. It was, in a sense, the end of the global movement that played an extraordinary role in defining the human dreams and the devastating geopolitical conflicts of the 20th century.

Today, there are just five communist states left — though China, with nearly one-fifth of the world’s population, is clearly a global power. But in the view of eminent UC Berkeley political scientist George W. Breslauer, if Karl Marx were alive today, he would not recognize the species of communism that survives there, or in Cuba, Laos, North Korea or Vietnam.

Breslauer is the author of a new book, The Rise and Demise of World Communism (Oxford University Press, 2021), an erudite, engaging exploration of the movement at its inception, its pinnacle and in its decline.

Beginning in the early 20th century, communism as an idea focused the aspirations of millions of people who were victims of exploitive manufacturers, feudal agricultural economies and unregulated capitalism. In the West, however, it also became a fear, an obsession — and a durable target.

That’s understandable: While the Soviet Union was essential in the defeat of Nazism in World War II, both the USSR and the People’s Republic of China were architects of repression, starvation and widespread terror. Communist governments were implacable foes of the United States in Korea, in Vietnam and in the countless smaller skirmishes and plots of the Cold War. For half a century, the world lived with an everyday anxiety that the conflict might spark a nuclear holocaust.

And yet, today, when some American conservatives embrace Russian President Vladimir Putin and accuse Democratic President Joe Biden of being a communist, the anti-communist impulse clearly has taken a bizarre turn.

Breslauer is credited with a deep scholarly influence in field of Soviet government and foreign policy, and he has been a prolific writer and an award-winning teacher. In his new book and in a recent interview, he makes clear that communism is not the Red Menace it used to be.

Still, he said, it continues to cast a long, and sometimes strange, shadow over our moment. In the interview, he explored some of our misconceptions and blind spots about communism — past, present and future.

Despite decades of fierce opposition by the U.S. and its allies, the fall of communism as a powerful global movement resulted, in great measure, from self-inflicted wounds. 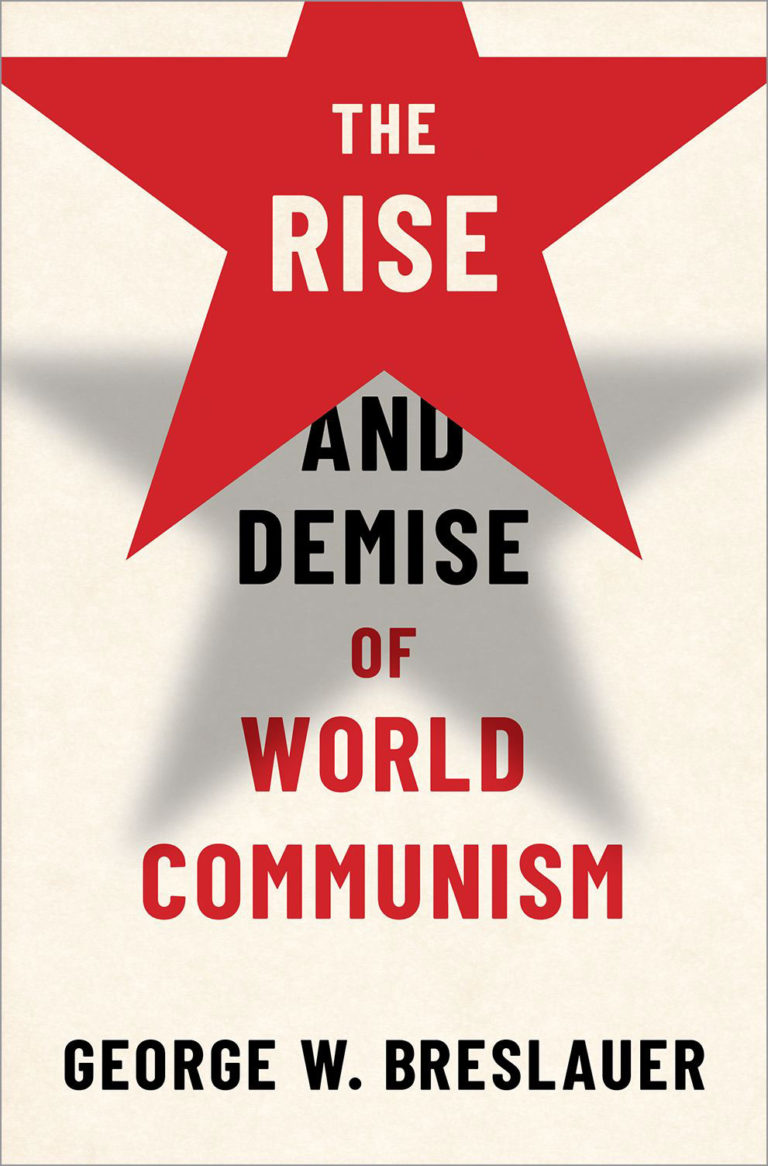 At its height, 16 nations governed under the mantle of communism, and communist political parties were active and influential in many European and Third World countries. Today, there are just five communist states, and they are anything but a unified movement.

What happened? It’s widely accepted that the U.S. defeated communism with a strategy of continual pressure, culminating in an aggressive escalation of military spending during the presidency of Republican Ronald Reagan.

Breslauer, however, traces the fall to a much earlier time, when the prospect of a nuclear war opened a profound split between the two giants of communism. “At the end of the 50s,” he explained, “Mao challenged the Soviets to threaten nuclear war against the United States — if it tried to resist China’s reconquest of Taiwan, for example.’

To Soviet Premier Nikita Khrushchev, “that sounded like madness,” Breslauer said. “At that point Khrushchev decided, ‘Wait a minute — detente with the United States to avoid nuclear war is more important than my alliance with China.’ That infuriated Mao.”

As the years passed, revolutionary communism yielded to a more bureaucratic variant — overcentralized and corrupt — especially in the Soviet Union and Eastern Europe.

“It stifled human entrepreneurial initiative,” Breslauer said. “Gradually, it demonstrated that it could not meet the needs of its people — material needs, the need for belief in a better future. That led to popular disillusionment, and the party apparatus could no longer easily justify itself. In the midst of this, party officials started to just enrich themselves …  and that only increased the disillusionment.”

If Karl Marx were alive today, he might not recognize communism as practiced by China, North Korea or even Cuba. But Lenin probably would.

In Breslauer’s telling, Marx imagined communism as a worker’s movement, primarily urban, that would arise in capitalist countries and lead to socialist democratization. In essence, industrial workers exploited by owners would rebel and install a system of shared ownership and work that would serve the interests of all people, not just of capital.

Lenin, the early leader of the revolution in Russia and architect of the Soviet Union, had a much different view: The Communist Party would be a revolutionary vanguard, leading the dictatorship of the proletariat until society was ready for true communism.

“Lenin invented what he called a party of a new type, one that brooks no opposition,” Breslauer explained. “For Lenin, the party was the whole of the political system.”

Today, however, China, Vietnam and Laos all have market economies overseen by their communist parties — an orientation that Breslauer calls “Market Leninism.” North Korea is strictly controlled by the Workers’ Party of Korea — a communist party in all but name. Cuba, under Fidel Castro, had the sort of cult of personality seen in North Korea and China, though without the mass terror. But since Castro’s death, the country has evolved to the inefficient, and sometimes corrupt, political culture typical of Eastern Europe in the 1980s.

His conclusion: “Marx probably wouldn’t recognize these countries as communist. Lenin probably would, once he thought it through.”

Western rivalries with Russia and China that began during the era of rising global communism continue today — but the conflicts are no longer about communism.

Putin and Chinese President Xi Jinping both grew up in communist political systems. Since the collapse, Russia and China both have introduced significant free market reforms, and both allow more economic and social freedom than they did 50 years ago.

Why didn’t that ease the conflict with the West?

“Putin was born in 1952 — he was 39 when the regime collapsed,” Breslauer said. “He made his career in the KGB, and the KGB was about the protection of state authority against internal and external enemies. … He’s not a communist, but what he does maintain from his earlier career is the veneration of state authority.”

His ideology today is “what we call authoritarianism, but he calls it ‘managed democracy,’” Breslauer said. “He believes that’s the proper alternative to Western liberal values, whether those values are about gay marriage or other types of freedoms that are salient in the West.”

China, meanwhile, turned away from a state-controlled economy after the death of revolutionary leader Mao Zedong and introduced broad market reforms, but under the supervision of the Communist Party. The result of this move toward Market Leninism has been massive improvements to the economy and the lives of hundreds of millions of Chinese people.

That has allowed China to be a major trading partner of the West, but also a powerful geopolitical rival.

In both Russia and China, communism has been replaced by nationalism — a national pride and sense of honor. And, said Breslauer, “they both offer anti-liberal political ideologies to a West that is challenging their great power status.”

Biden and Vice President Kamala Harris are not communists, and neither is U.S. Sen. Bernie Sanders. Anyone who suggests they are is not thinking clearly.

“It’s nasty, but it resonates with some sections of the American populace because we were in so many decades of Cold War against communism. People who don’t read widely or think deeply hear that, and it has a certain plausibility. But to anyone who is at all knowledgeable, who reads a respectable newspaper every day, it’s just demagoguery. It bears no relation to what communism really means.”

Communism is characterized by a lack of private property, and yet, obviously, private property is prevalent — and legally well-protected — throughout the U.S. and Europe. But when the state uses its taxing power to check extreme inequality, Breslauer said, that provokes name-calling.

“Those who have an interest in maintaining that level of inequality throw around accusations of communism and socialism just because you support Medicare,” he said.

Communism is down, but it’s not necessarily out.

Through its long history, and despite its complex ambitions, communism never brought the vision of Marx to fruition, and in its Cold War form, it did not bring down the world capitalist order. Starvation, persecution and corruption have been bad for the brand.

And yet, in Breslauer’s view, communism is likely to have a durable appeal. “Marxism will always be with us, because Marxism is, as an ideology, a cry against injustice and inequality,” he said. “When people are looking for an explanation of those conditions, some people will gravitate to Marxism.”

The Leninist variant — heavy on party structure, state control of the economy, and repression of dissent — has largely been discredited. But, he said, the communism envisioned by Mao may yet inspire future generations.

“I could see Maoism as an insurgency in highly unequal societies that takes hold in rural areas,” he said. “It may not emerge victorious, but it could resonate in South Asia or Southeast Asia or Latin America, in particular, and maybe some places in Africa.

“We could see a revival of this notion of a rural insurgency that mobilizes the impoverished and the taken-for-granted peasantry to fight against its lot. I could see that as making a comeback, especially if climate change is going to be highly disruptive throughout entire regions and leads to vast population movements.”

“At the end of the book,” said Breslauer, “I basically said that whether there is a future for communism may depend on how the future remembers communism — as an achievement, or as a tragedy.”