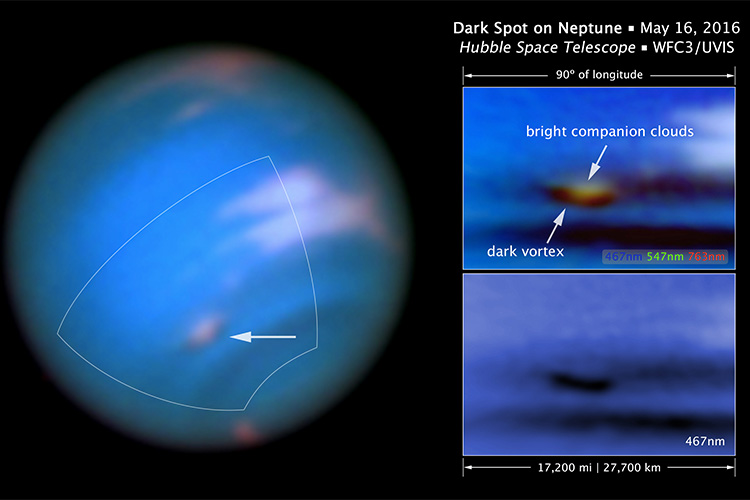 New images obtained by the Hubble Space Telescope confirm the presence of a “dark vortex” in the atmosphere of Neptune, a rare type of feature that can persist for years. This vortex, the first to be observed on Neptune in the 21st century, was first seen in September 2015 by the HST.

Neptune’s dark vortices are high-pressure systems, which makes them more similar to mid-Atlantic eddies on Earth or the high-pressure regions that periodically bring dry, warm weather to the West Coast, rather than to cyclones like typhoons or hurricanes.

On Neptune, dark vortices are associated with bright patches of high-altitude clouds – also now visible on the planet – created when air is diverted upward and the gases freeze out.

“Dark vortices coast through the atmosphere like huge, lens-shaped gaseous mountains,” said UC Berkeley research astronomer Mike Wong, who led the team that analyzed the HST data. He announced the discovery in an astronomical telegram dated May 17.

Dark vortices were first discovered in high-resolution images of Neptune from Voyager 2 in 1989. These vortices were trailed by companion clouds, thought to result when the flow of ambient air is perturbed and diverted upward over the vortex.

Starting in July 2015, bright clouds were again seen on Neptune and were subsequently observed by several telescopes. Observers wondered whether these clouds were large convective storms, or bright “companion clouds” following an unseen dark vortex. In September, the question was answered by the Outer Planet Atmospheres Legacy (OPAL) program, a long-term Hubble Space Telescope project that annually captures global maps of the outer planets. OPAL images revealed a dark spot close to the location of the bright clouds that had been tracked by ground-based observers, including amateurs and professional astronomers at the Keck Observatory in Hawaii.

The vortices discovered so far exhibit surprising diversity, in terms of size, shape, oscillatory behavior, drift rates along the meridian and meandering from latitude to latitude. “The Berg” on Uranus, a similar companion cloud feature, oscillated about a fixed mean latitude – perhaps for decades – and then suddenly left that pattern and started a five-year migration toward the equator, eventually dissipating, as documented by UC Berkeley astronomy professor Imke de Pater in 2011.

Neptune’s dark vortices come and go on much shorter timescales compared to similar anticyclones on Jupiter, which evolve over decades. Many questions remain as to how dark vortices originate, what controls their drift and oscillation, how they interact with the environment and how they eventually dissipate, according to UC Berkeley’s Joshua Tollefson, who was recently awarded a prestigious NASA Earth and Space Science Fellowship to study Neptune’s atmosphere. Measuring the evolution of the new dark vortex will extend knowledge of both the dark vortices themselves and the structure and dynamics of the surrounding atmosphere.