Academic research sponsored by industry has a strong track record of leading to innovative patents and licenses, challenging assumptions that corporate support skews science toward inventions that are less accessible and less useful to others than those funded by the government or non-profit organizations, according to a new analysis.

The findings, published today (Wednesday, March 19) in a commentary in the journal Nature, are based upon a study of two decades of records from the University of California system.

The authors, led by Brian Wright, UC Berkeley professor of agricultural and resource economics, analyzed 12,516 inventions and related licenses at nine UC campuses and three associated national laboratories. The inventions were disclosed between 1990 and 2005, and licensing activity was analyzed through 2010. Of the inventions, nearly 1,500 were supported at least partly by private industry. (UC Merced, the 10th UC campus, was not included because it opened in 2005.)

“This runs counter to the expectation that corporate-sponsored inventions have narrow applications, and so create … few benefits for others,” the authors wrote.

Locking up inventions for profit?

Because corporations usually get first crack at negotiating licenses to the inventions they sponsor, there is an assumption that corporations would tie up innovative discoveries in a way that restricts access to a broader audience.

To illustrate those concerns, the authors referenced reactions to a 1998 deal with Swiss pharmaceutical company Novartis to support biotechnology research at UC Berkeley, and to a research consortium, the Energy Biosciences Institute (EBI), funded by energy giant BP and led by UC Berkeley.

In both cases, critics expressed fears that corporate interests would stifle UC Berkeley’s public mission by locking up discoveries for industry profits. (The Novartis project yielded no patents, and EBI began too late to be included in the study.) 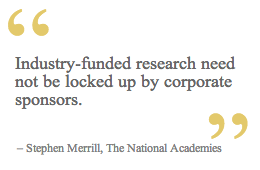 “We didn’t expect these results,” said Wright. “We thought companies would be interested in applied research that was closer to being products, and thus more likely to be licensed exclusively and less cited than federally funded counterparts, but that did not turn out to be the case.”

The authors acknowledged that they might not have identified all third-party licensees that were actually affiliated with the original corporate sponsor, but Wright said this does not affect the finding that licenses to corporate-funded inventions are not more likely to be exclusive.

“Industry-funded research need not be locked up by corporate sponsors if both the sponsored research office and the tech-transfer office take care in protecting and marketing the results,” said co-author Stephen Merrill, executive director of Science, Technology and Economic Policy at The National Academies.

To explain why more corporations do not take advantage of exclusive licenses borne from research they sponsor, the authors cite previous studies suggesting that industry turns to universities to explore areas outside of their core business model in the hopes of finding new opportunities for profit. Some of these inventions might prove more interesting to firms with different agendas or in other industries, the researchers said.

“The inferences about company motivations in sponsoring academic research are somewhat more speculative, but comport with what we’ve been told by major corporations funding research at top tier institutions,” said Merrill.

The authors of the new Nature paper said their findings should not be used to relax oversight over industry funding, particularly when it comes to trials of products rather than the invention disclosures covered in this analysis.

“The tobacco, food, pharmaceutical and other industries have been shown to manipulate research questions and public discourse for their benefit, and even to suppress unfavorable research,” the study authors wrote.

The new analysis also covered only one university system, and it “may not be typical of all academia,” said Wright. He added that the University of California system’s strong reputation for basic research gives its tech transfer offices more pull when drawing up contracts.

During the 20-year period analyzed in the paper, UC campuses accounted for up to 9 percent of total U.S. academic research expenditure, and it collectively obtained more issued patents than any other U.S. academic institution. Tech transfer offices at small universities may benefit by pooling resources to increase their negotiating power, said Wright.

Outsourcing tech transfer and pooling resources are suggestions included in a report, “Managing University Intellectual Property in the Public Interest,” put out by The National Academies in 2010. The report included recommendations to universities and to the federal government for handling and monitoring tech transfer. Merrill was an author of the 2010 National Academies report as well as a co-author of this Nature commentary.

Wright noted that intellectual property protection overall – whether funded privately or publicly – has been far from problem-free. For example, in a 2009 survey that he co-authored, academic agricultural biologists expressed a negative view, on balance, of the effects of intellectual property rights on their access to biological research tools, and said this hindered progress in their discipline.

The authors of the Nature paper concluded that while universities should remain vigilant when setting up contracts with corporations, “they should not assume companies are focused mainly on tying up intellectual property.”

The other co-authors on the paper are Kyriakos Drivas, a postdoctoral research economist at the Agricultural University of Athens, and Zhen Lei, assistant professor of energy and environmental economics at Pennsylvania State University.