Connected Corridors aims to up efficiency of existing roadways 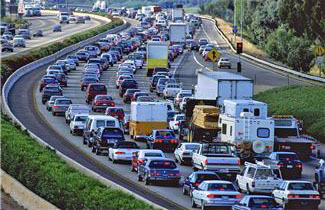 Two California urban areas have the dubious distinction of being tied for second-worst traffic in the country. Commuters spend 61 hours per year being stuck in traffic in the Bay Area and in Los Angeles. (First prize goes to Washington, D.C., with an average of 67 hours.) Population and car numbers continue to increase, which means more frustrating hours spent in gridlock, more money lost on wasted energy, and more air pollution. In the past, government agencies across the country would have addressed the crunch by widening highways and building new roads, tunnels and bridges. However, for both financial and space reasons, the emphasis has now shifted from building new infrastructure to more efficient use of what we have already built.

“If you look at the cost-benefit tradeoffs, more efficient operations is a much better deal,” says Alex Bayen, the principal investigator of a new UC-Berkeley based project to boost freeway efficiency.

The project, called Connected Corridors, led by Bayen and his UC Berkeley colleague professor Roberto Horowitz, is developing new technologies that will help Caltrans gather and analyze traffic data to make real-time whole-system traffic management recommendations. Connected Corridors is an outgrowth of two projects: Mobile Millennium, which Bayen launched in 2008 that employed data from mobile-phone-using volunteers to fuel a traffic-mapping application; and Tools for Operational Planning (TOPL), Horowitz’s project that employs novel algorithms to model traffic. Within the next three years, the combined group will implement a prototype traffic-advisory system for a major commuting corridor in California. The project is currently working with Caltrans to determine the best possible location, but a heavily-used corridor in the Los Angeles area is the leading candidate.

Exploiting both Bayen’s ability to gather real-time traffic data and Horowitz’s ability to crunch it, the project will create a modeling program that quickly evaluates traffic conditions and then recommends the best possible mitigating actions for the agencies that control both the freeway itself and the smaller arterials surrounding it.

“We are not just going to be monitoring traffic, we are also going to be managing it,” says Horowitz, who is director of Partners for Advanced Transportation Technology (PATH), a Berkeley-based institute dedicated to advancing traffic management and traveler information systems.

Because the project requires the coordination not only of huge data sets, but also of multiple state and local agencies, it has a large policy component as well its core technological ones. “If the agencies and governments cannot cooperate and communicate, this will not work,” says Horowitz.

There will be times when the system analysis recommends using metering lights on an entrance ramp to relieve congestion and speed traffic on the freeway. But that relief might come at the expense of, say, a backup of traffic from those metering lights into a commercial or residential district along the highway. Caltrans may be most concerned with relieving traffic for the thousands of cars on the highway, but a city’s government might be more concerned with keeping its own streets flowing smoothly. Coordinating the sometimes conflicting needs and responsibilities of different agencies and governments, and building those potential conflicts of interest into the modeling program, is a significant part of the project, says Bayen, an associate professor of civil and environmental engineering at UC Berkeley.

“We are taking care to address those possibilities upstream,” says Bayen. A decision tree will be built into the modeling advisor, and any actions that would violate agreements between agencies will not be considered among the viable alternatives.

At the traffic managers’ disposal will be a kit of traditional tools to go with some new ones. The group will be controlling metering lights at freeway entrances, occasionally opening shoulders to traffic, coordinating lights on freeway entrances—and those on arterials in neighboring areas as well. They will also employ changeable message signs on the freeway to report general conditions downstream and advise drivers about what is happening ahead in their own lane. All of these management tools will be supercharged by the coordinating and analytical power of the “very, very fast macro-simulation programs” at the heart of the project, says Bayen.

Whereas other traffic-decision-support projects around the country rely on micro-simulation programs that crunch every single piece of data, the Berkeley team addresses the problem at a larger resolution and “faster results that are much easier to optimize,” says Bayen. That means the program can consider all of the alternatives and give real-time advice about the best way to reduce overall congestion in almost any scenario.

Of course commuters, too, make up a self-calibrating and learning system. Turning that fact to the project’s advantage, Connected Corridors has teamed up with Waze, the prime social network for commuters.

“Traffic information is not only quantitative data, like speed and travel times,” says Bayen.  “It includes aspects of qualitative life not necessarily captured by numbers: people feeling happy about their commute, sharing things about the difficulty of a specific road or the danger of another road.”

On its mobile app, Waze users share real-time information about accidents, road conditions and alternate routes. That data will be fed into the Connected Corridors advisor program, as well. The wisdom of the crowd will complement the genius of the learning imputation algorithm.

For now, the system will strictly be a “decision support system.” It will advise human decision makers in real-time on what to do to improve traffic. Eventually, however, the system could be entirely automated, a “decision control system,” says Horowitz. In fact, when areas covered by computational tools become large, interconnected, and complex enough, it may be impossible for any human to understand, in real time, why a particular traffic management strategy would be optimal.

“Eventually the thing should run on its own,” says Horowitz. “But first we are trying to present the best available information to humans in a way that they can grasp and act upon. We will be very conservative.”

A system that accurately models traffic outcomes will not only be useful on a day-to-day basis for managing existing traffic, but will also be a helpful tool for policymakers trying to predict the consequences of different proposed development projects and infrastructure alterations.

Phase Two of Connected Corridors will include a public transportation component, communicating with drivers about their transit options even as they move toward their destinations. If an accident causes gridlock downstream of a BART station, for example, drivers can be informed where they can find station parking and how much time they could save by shifting out of their cars and into a train.

“Right now we are working on more efficient operations. And then there is nudging people’s behavior,” says Bayen. “That is a little more futuristic, and I do not think we are quite ready for that.”