By: Bruce Fuller and Karen Manship 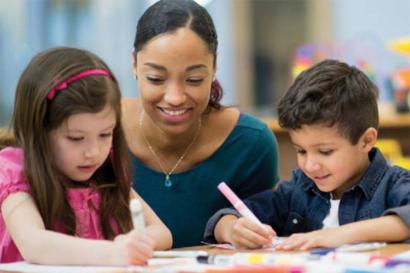 Just 52 percent of the state’s 3- and 4-year-olds are enrolled in a pre-k program, and the shortage besets middle-class and poor families alike, researchers found after compiling data from a variety of state and local agencies.

A half-century of research has detailed the benefits of preschool for children’s early learning and later school achievement, including recent studies in four California counties.

The new analysis ­— Achieving Fair Access to Early Education ­— takes an unprecedented look at pre-k enrollment rates statewide, along with disparities in supply across regions and among local communities (zip codes). It was conducted by researchers at American Institutes of Research (AIR) and UC Berkeley.

“California has shown discernible progress in widening access to preschool for 4-year-olds,” said Karen Manship, principal researcher at AIR and lead author of the study. Over two-thirds attended preschool in 2016, the most recent year with complete data. Almost 70 percent of children from low-income families gained access to local centers.

“But pre-k remains painfully scarce for families with 3-year-olds across California,” Manship said. Just over one-third (34 percent) of the state’s 3-year-olds attend preschool statewide, far below other states nationwide. “And only one in eight infants and toddlers are in licensed care arrangements.”

The study did not examine the quality of pre-k programs statewide, which varies radically, at times staffed by poorly paid teachers, researchers said. “We must ensure that quality rises along with enrollment rates,” said Bruce Fuller, professor of education at UC Berkeley, who led the project. “We don’t want to expand access to mediocre pre-k.”

California families pay over $9,100 yearly for preschool on average, unless they qualify for public support, according to the state’s parent resource network.

Several lower-income counties face a “double-edged disparity,” researchers say, where child care supply has historically been low and child populations are projected to continue to grow. On the other hand, counts of young children have begun to fall in major urban counties, which provides these counties an opportunity to get closer to universal access.

There are notable shortages in farther-out suburbs, where metro-area commuters reside, and there are scant programs in the Central Valley. In San Joaquin County, an hour from Silicon Valley, just 44 percent of all 4-year-olds enroll in pre-k. Riverside County suffers from meager supply as well; only 43 percent attend preschool.

The picture remains mixed for major urban counties. The pre-k enrollment rate for all 3- and 4-year-olds stands just below half (48 percent) in Los Angeles County. But over three-quarters of 4-year-olds from low-income families now attend a center, thanks in part to L.A. Unified’s aggressive effort to lift early learning.

Some 77 percent of 4-year-olds attend preschool in comparatively affluent Santa Clara County. But supply ranges much higher in metro-areas, compared with farther-out “commuter settlements” and the Central Valley. One-quarter of all 3-year-olds have access to licensed child care or preschool in San Joaquin County, relative to 53 percent in San Francisco.

At least one gubernatorial candidate is highlighting the importance of affordable early care and education. “We need to focus on building the architecture of the brain in those first three critical years [of life],” Lieutenant Governor Gavin Newsom said during a candidate forum last spring. “I’m the only person on this stage who actually did it — fully implemented universal preschool as mayor of San Francisco.”

The Republican candidate for governor, John Cox, has expressed no position on child care or preschools for the state’s young children.

California was home to over 2.4 million children who were 0 to 4 years of age in 2016. About one million of these kids are raised in middle-class or upper-income families who do not qualify for public support of child care or pre-k slots.

The new study was conducted for the Berkeley Early Childhood Think Tank, an independent panel that is devising policies to improve family access to, and the quality of, child care and pre-k programs. The panel’s work is funded by the Heising-Simons Foundation in Los Altos.

Maps are available displaying gaps among counties and zip codes.

The analysis was led by Karen Manship, principal researcher at AIR based in San Mateo, and co-directed by Bruce Fuller, professor of education and public policy at UC Berkeley. Manship can be contacted at (650) 376-6398 (kmanship@air.org); Fuller is reachable at (415) 595-4320 (b_fuller@berkeley.edu).