Changes in primate teeth linked to rise of monkeys

UC Berkeley paleontologists have identified distinctive features of primate teeth that allow them to track the evolution of our ape and monkey ancestors, shedding light on a mysterious increase in monkey species that occurred during a period of climate change 8 million years ago.

The inherited dental features will also help the researchers track down the genes that control tooth development, assisting scientists intent on regrowing rather than replacing teeth.

The features were discovered after detailed study of the shapes of molars and premolars inherited by baboons in a long-studied colony at the Southwest National Primate Research Centerin San Antonio, Texas. Once it became clear that the relative lengths of the molars and premolars are an inherited trait much like eye color, the researchers measured these traits in the teeth of other primates, sifting through museum collections around the world.

The measurement data prove that the feature is inherited in a similar way in all primates – humans included – and varies across different species and genera in a way that mirrors the evolutionary relationships worked out earlier by analyzing bones and comparing genes.

“This shows that we can use the power of evolutionary history to unlock what is going on genetically in animals on whom you can’t experiment, such as humans,“ said study leader Leslea Hlusko, a UC Berkeley associate professor of integrative biology. “We found two inherited traits, but identitying the traits is only the first step. We now have to figure out what the genome sequences are that underlie these traits, which will enable us to figure out what caused these evolutionary changes in dentition.“

Hlusko and her UC Berkeley colleagues – former postdoctoral fellow Christopher Schmitt, now at Boston University, and graduate students Tesla Monson and Marianne Brasil – along with Michael Mahaney of the University of Texas Rio Grande Valley in Brownsville, will publish their analysis this week in the journal Proceedings of the National Academy of Sciences.

The rise of monkeys and the decline of apes

When Hlusko and her colleagues looked at how the two newly identified traits changed in primates over the last 20 million years, they noticed an unusual shift in tooth shape at the same time apes began to die out and monkeys to proliferate. This took place about 8 million years ago, in the Miocene epoch, as Earth began to warm, the Mediterranean Sea dried up and Africa’s thick forests transitioned to grasslands and savannah. At the same time, numerous species of apes, which had lived across Africa and southern Europe, began to disappear, and monkeys evolved more lineages. Today there are 19 monkey genera, while apes have dwindled to only six: humans, chimpanzees, bonobos, gorillas, organutans and gibbons.

“If you go back into the Miocene, it was an ape world with essentially no or very few monkeys,“ Hlusko said. “Now it is exactly the opposite: we have only a handful of apes and a whole lot of monkeys.“

The change in dentition suggests that monkeys took over a niche that apes previously occupied, though whether that was a dietary niche or had more to do with primate life cycle remains to be figured out, she said. Dentition can evolve not only because of changes in the types of food animals chew, but also as a result of changes in when and how they erupt during development.

“Monkeys moved into that ape niche, in terms of a dental pattern, but what exactly that means I don’t know yet,” said Hlusko, a member of UC Berkeley’s Human Evolution Research Center. “It may be something more complicated than just diet. Maybe it was the kind of food they ate at different stages of their lives, or it might have to do with the timing of major life history events that can influence the timing of tooth eruption, such as when they reached sexual maturity.“

Hlusko’s interest in the evolution of bones and teeth, and the genes that control them, comes out of her interest in paleontology and human origins. Over millions of years, our human and primate ancestors left a trail of teeth that she and other paleontologists have followed for clues to our evolutionary history.

Unfortunately, what is known about the 300 or more genes that control tooth development comes mostly from mouse studies, and their teeth are a lot different from those of primates, from which they diverged about 70 million years ago.

“Mice are a good model for understanding how teeth are made, but not a good model for understanding the finer details of how teeth evolved,“ she said. “This is important from a dentistry perspective, because people are really interested in regenerating teeth so we don’t have to have fake teeth implanted into our jaws. To induce growth of a new one, however, it would be really useful to know how they grow naturally to begin with.“

In her search for genes important in dental development, Hlusko uses a classical quantitative genetics approach that applies the rules of heredity, discovered 150 years ago in Gregor Mendel’s studies of simple traits in peas, to not-so-simple traits like the sizes and shapes of teeth. Geneticists classify traits like tooth size and shape as “complex” because they are affected by DNA variations within many genes.

“Although biologically real, the individual effects of many of those genes, or variations within them, are quite small,” said Mahaney. “One of Leslea’s goals is to detect and identify a few of these genes with major effects on variation in tooth size and shape in general. Such key genes likely would serve as signposts to biological pathways important to normal and disordered dental development.”

How to recognize a monkey

Monkeys have tails and apes don’t, Hlusko said, but the differences go way beyond that. With a last common ancestor 24 million years ago, monkeys have smaller brain cases than apes relative to body size and a shorter life span. Apes have a larger relative cranial capacity, and a longer childhood and lifespan. Apes’ molars are more bulbous, without sharp tips, whereas monkey molars look like two loaves of bread side by side with bladelike crests. One major difference between Old World monkeys – those, like baboons, that live in Africa and Asia – and America’s New World monkeys, like the capuchins or organ-grinder monkeys, is that they do not have prehensile tails, and so can’t hang by their tails from trees. 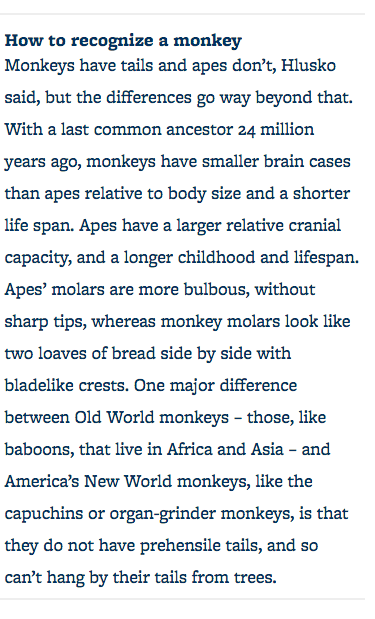 Now, with the help of 632 members of the baboon colony, she has found two measures of teeth in the back of the mouth that seem to be under the control of just a few genes. One is the ratio between the lengths of the third molar and the first molar; the other the ratio of the lengths of the second molar to the fourth premolar.

“Instead of thinking of each tooth as a separate unit, we found that the relative size of the first compared to last molar is an inherited trait, like earlobe attachment. The same goes for the relative size of the last premolar relative to the molars,” she said. “We’ve turned the dentition into simple traits, and from that, elucidated a major diversity shift in primate evolution. The next step is to look back to the genome and see if we can find the genes that underlie this.”

Based on measurements of teeth from 723 extant Old World monkeys from Africa and Asia – many of them measured by some 50 UC Berkeley undergraduate premed or predental students – she found that this group of monkeys also inherits the two traits as simply as eye color. When she looked further – measuring the teeth of 199 extant apes, 56 fossil Old World monkeys and 165 fossil apes – the pattern persisted. In all, the species she sampled represented 20 genera and 37 species of living and extinct monkeys and apes.

The analysis revealed that 20 million years ago, apes varied enormously in these dental traits. But monkeys began to evolve some of the same dental traits as apes, and replaced apes that had similar traits. Only a small number of apes with dental traits unlike today’s monkeys survived, including our ancestors.

“Only those apes with a specific range of dental features had a shot, and one of them was our ancestor,“ she said. “That shift was an important first step in our lineage’s evolutionary history, and it set the stage for the evolution of standing up on two legs and pair bonding. And once you start pair bonding you open the door for all kinds of things, like extended childhood and more complex social interactions – all the kinds of things that humans do today.“

Hlusko has expanded her study to look at a broad range of mammal teeth – including many dire wolves from the La Brea tar pits in Los Angeles – to see whether these two traits are independently inherited in all animals.

The work was supported by the National Science Foundation. The Texas colony of Hamadryas baboons (Papio hamadryas) is funded in part by the National Institutes of Health.