By: Michael Barnes, College of Chemistry

In the face of rising levels of atmospheric carbon dioxide, chemical engineering professor Berend Smit would be the first to agree that the best way to sequester carbon is in the form of coal. “In other words,” Smit says, “never burn it in the first place.” But he is skeptical that, no matter how much priority is given to energy alternatives and increased efficiency, the planet’s coal reserves will remain underground. “Humankind,” he says, “needs a Plan B.”

Together with chemistry professor Jeff Long, Smit is heading a new Department of Energy-funded Energy Frontier Research Center (EFRC). Smit is working with several researchers at Berkeley and other universities to find ways to capture carbon dioxide, produced by burning coal and natural gas, from the waste stream of power plants so that it can be sequestered underground.

Sitting in his Gilman Hall office recently on a lovely spring afternoon,  Smit laid out the scope of the problem and explained the need for urgency. He pointed out that even though the growth of solar, wind, nuclear and other forms of energy in coming decades will reduce the share of fossil fuels in the world’s energy mix, the projected growth in overall energy demand will require higher absolute levels of fossil fuel use. If so, without carbon capture and sequestration, the amount of CO2 that humans inject into the atmosphere will continue to rise. “Climate science can’t tell us yet precisely what level of atmospheric CO2 is sustainable in the long run,” says Smit, “but as long as we begin to act before we reach critical levels, we have some headroom in which to begin to reduce CO2 emissions from concentrated sources like power plants. But once we overshoot sustainable levels of CO2, we must shift to removing it from the atmosphere itself, and that’s much more difficult to do.”

Smit explained why some appealing fixes are inadequate for the scale of the problem. “It is very difficult to grasp how much CO2 we produce—30 gigatons is beyond comprehension. For example, this is far too much CO2 to convert it all chemically. Any production process that attempts to combine CO2 with other raw materials to produce some marketable product will quickly exhaust supplies of raw materials and flood markets with the final product.”

Simply pumping the waste gas from power plants underground is also problematic because only about 15 percent of the waste gas is CO2. But if CO2 is captured and pressurized to its supercritical (liquid-like) state, 20 times more CO2 by volume can be sequestered in an empty oil well or other underground repository.

“So,” says Smit, “we must capture the CO2 from power-plant waste gas, and we must do it with a process that can be cycled over and over using the same reactants, and then we must store it underground. The good news is that much of this technology already exists. In Texas oilfields, pipelines transport supercritical CO2, where it is pumped underground to enhance oil recovery. Sequestration and transport each only cost about $2-$6 per ton of CO2. But at this point, capture costs about $30-$60 per ton, and that’s the problem we need to work on.”

The Berkeley Energy Frontier Research Center focuses on gas separation and will engage several researchers from Berkeley and other universities to develop new materials and membranes with pore sizes and structures that will allow gas molecules to adsorb (adhere to their surfaces) and will release CO2 in a controllable and energy-efficient way.

Co-director Jeff Long has developed techniques for producing an almost infinite variety of metalorganic frameworks. Three other UC Berkeley researchers are taking part—Ting Xu, who holds a joint appointment in the Departments of Chemistry and Materials Science and Engineering, Jean Fréchet, who holds a joint appointment in chemistry and chemical engineering, and Jeff Reimer, ChemE chair. Ting and Fréchet develop different types of membranes for CO2 separation. Reimer lends his expertise in solid-state NMR to help verify and characterize the new materials.

The EFRC research at Berkeley is fully integrated with that of the Lawrence Berkeley National Laboratory. The EFRC researchers not only use LBNL facilities, such as the Molecular Foundry, the National Energy Research Scientific Computing Center and the Advanced Light Source, but also collaborate with staff scientists. The types of materials that are made in the EFRC create many new challenges, and the EFRC allows LBNL staff scientists to develop novel methodologies. For example, Blandine Jerome and Jeff Kortright develop novel characterization techniques to obtain a better molecular insight into the molecular arrangement of polymer films.

In addition to coordinating the efforts of his EFRC colleagues, Smit brings to the project his own expertise in computational chemistry, which he developed by modeling the porous zeolite catalysts used by the petrochemical industry. The use of these catalysts has dramatically improved the efficiency of oil refining during the last several decades.

Zeolites are microporous aluminosilicate materials that have many uses in addition to the catalytic cracking of long-chain hydrocarbons. They can take hundreds of different configurations. Smit’s computational techniques model the nanoscale topography inside zeolites, and he will apply his computational skills to finding metalorganic frameworks with desirable properties for adsorbing CO2. Smit’s work with CO2 capture is a continuation of his many years of research directed to maximizing the efficiency of conventional energy production. Born and educated in the Netherlands, he earned master’s degrees in both chemical engineering and theoretical physics. He obtained his Ph.D. in 1990 at the University of Utrecht with professors D. Frenkel and S. W. de Leeuw.

In 1991, Smit spent a year as a visiting scientist with Berkeley chemistry professor David Chandler’s research group and then returned to Amsterdam, where he rejoined his former employer Shell Research. After a stint as a professor at the University of Amsterdam, he became the director of CECAM, the European Center of Atomic and Molecular Computations, in Lyon, France. He was recruited to join Berkeley’s chemical engineering faculty as a full professor in 2007. Smit and colleagues will be immediately confronted with an interesting but difficult problem. There are more than five million possible structures that can be built using different combinations of metals and organic ligands. Most have extremely low densities and internal surface areas up to 5,200 square meters per gram. “You can’t possibly begin to screen that many structures,” says Smit, “either on the bench top or computationally.

“Our strategy,” continues Smit, “will be to first develop about 20 different materials and test them for their ability to capture CO2. Next we will create a large database of thousands of possible metalorganic framework materials. The trick will be to create mathematical techniques to allow us to accurately characterize their geometrical and physical features.”

Working with the computer science division at LBNL, Smit and colleagues will develop statistical data-mining methods to identify the similarities between the handful of structures they first create and the hundreds of related structures that could be created which might also have the ability to adsorb CO2.

The pharmaceutical industry has long used computational chemistry to find drug candidates among millions of possible organic compounds with potential therapeutic effects. “But,” notes Smit, “together with Maciej Haranczyk from LBNL, we are studying the pore sizes and topology of the materials in addition to their molecular components. Our ideas are related to the established concepts used in pharma research, but it is the differences that make this research so interesting.”

Smit’s EFRC is just one of 46 centers announced in 2009 by U.S. Secretary of Energy and former LBNL director Steven Chu in response to critical energy challenges. The Department of Energy will provide funding of $777 million for EFRCs at universities, national laboratories, nonprofit organizations and private firms across the nation.

“As global energy demand grows, there is an urgent need to reduce our dependence on imported oil and curtail greenhouse gas emissions,” emphasizes Chu. “These centers will mobilize the enormous talents and skills of our nation’s scientific work force in pursuit of the breakthroughs that are essential to expand the use of clean and renewable energy.”

The 46 EFRCs are being funded at $2–$5 million each per year for a planned initial five-year period. Selection of the EFRCs was based on a rigorous merit review process utilizing outside panels composed of scientific experts. In all, the EFRCs will involve nearly 700 senior investigators, more than 110 institutions, and will employ over 1,100 postdoctoral associates, graduate students, undergraduate students and technical staff.

LBNL will also host one of the new EFRCs, the Center for Nanoscale Control of CO2. Directed by Berkeley professor of geochemistry Donald DePaolo, the center will study how best to sequester CO2 in porous rock media to make sure the gas remains safely confined underground for thousands of years.

Smit credits Secretary Chu for helping to bridge the gap at DOE between fundamental and applied research. Within DOE, the perspectives and projects of researchers involved in short-term applied projects often don’t overlap with those of the researchers engaged in fundamental work. “Chu has helped bring researchers together to focus on fundamental research that can help solve immediate problems,” says Smit.

Bridging this gap is a familiar issue for Smit. His perspective is based in part on the flexible relationship between academic and industrial research in the Netherlands, where researchers are free to move between academic positions and jobs in Dutch corporations like Shell, Uni lever and Phillips. “There are many interesting fundamental research problems that arise in industry,” says Smit. “Research is most useful in the areas where fundamental and applied problems overlap.”

Chu recently told Newsweek magazine that he would like to see carbon capture and sequestration deployed in 10 years’ time. Currently, only half of fossil-fuel burning occurs at large fixed plants where carbon capture is a possibility. But as electric vehicles become more widespread, the burning of fossil fuels will shift from automobiles back to power plants. As Smit points out, “the development of better batteries for electric cars along with better ways to sequester carbon are two technologies that complement each other nicely.”

Transforming the way we generate, supply, transmit, store and use energy will be one of the defining challenges for humankind in the 21st century. At its heart, the challenge is a scientific one. “It’s ironic,” Smit concludes. “Until recently, CO2 was considered a boring molecule—small and non-reactive—so chemists and engineers haven’t done much to study it. That,” he adds, “is changing very quickly.”

Addtional information about this Energy Frontier Research Center is available at http://www.cchem.berkeley.edu/co2efrc/. 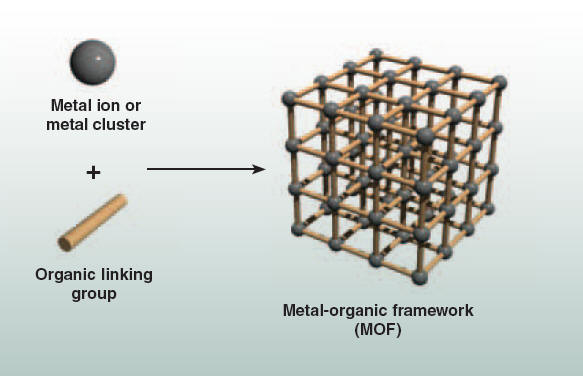 These materials have potential for a variety of energy applications. They can be conveniently prepared from inexpensive metal salts and chemically-tailored organic bridging units. The combination of these two components in solution results in the formation of a three-dimensional network solid (right), which has a very high porosity and pores with finely-tuned chemical properties. Professor Jeff Long and co-workers have recently prepared an iron-based metal-organic framework, Fe-BTT, which exhibits a network structure similar to the mineral sodalite and is useful for carbon dioxide capture (bottom left). They have demonstrated promising hydrogen storage properties in this material (bottom right), which could help make practical hydrogen “gas tanks” for zero-emission fuel cell vehicles.