Reductions in emissions of black carbon since the late 1980s, mostly from diesel engines as a result of air quality programs, have resulted in a measurable reduction of concentrations of global warming pollutants in the atmosphere, according to a first-of-its-kind study examining the impact of black carbon on California’s climate.

The study, funded by the California Air Resources Board and led by Dr. Veerabhadran Ramanathan of the Scripps Institution of Oceanography at the University of California, San Diego, estimates that reductions in black carbon as a result of clean air regulations were equivalent to reducing carbon dioxide emissions in California by 21 million metric tons annually or taking more than 4 million cars off California roads every year. 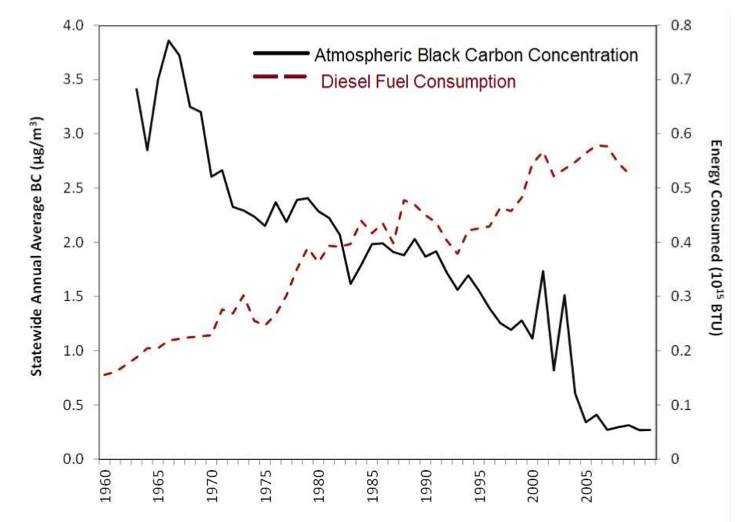 “We know that California’s programs to reduce emissions from diesel engines have helped clean up the air and protect public health,” said ARB chairman Mary D. Nichols. “This report makes it clear that our efforts to clean up the trucks and buses on our roads and highways also help us in the fight against climate change.”

Black carbon — tiny soot particles released into the atmosphere by burning fuels — has been linked to adverse health and environmental impacts through decades of scientific research. It is also one of the major short-lived contributors to climate change. The major sources of black carbon in California are diesel-burning mobile sources, residential wood burning in fireplaces and heaters, agricultural burning and wildfires.

The 3-year-study, titled “Black Carbon and Regional Climate of California,” was conducted by UC San Diego, UC Berkeley, and the U.S. Department of Energy’s Lawrence Berkeley National Laboratory (Berkeley Lab) and Pacific Northwest National Laboratory. It is the first comprehensive regional assessment of the climate impact of black carbon on California. In conducting the study, scientists used computer models and air pollution data collected by aircraft, satellite and ground monitors.

The study’s results support a growing body of scientific evidence that suggests it is possible to immediately slow the pace of climate change regionally by reducing emissions of short-lived climate pollutants, like black carbon.

According to co-author Dr. Tom Kirchstetter of Berkeley Lab, black carbon levels have decreased by about 90 percent over a 45-year period, beginning with the establishment of CARB in 1967, mostly as a result of state regulations for diesel engine emissions. Researchers found the state’s efforts to reduce diesel emissions to have lessened the impact of global warming on California, supporting earlier theoretical computer modeling by Dr. Mark Jacobson of Stanford University that reducing black carbon from diesel combustion is a potent ‘climate cooler.’

The reductions occurred during a time when diesel fuel consumption increased by about a factor of five, attesting to the effectiveness of CARB regulations requiring cleaner fuels and vehicle technology.

The study took a conservative approach in examining the impact black carbon has on the Golden State. Researchers considered emissions only from diesel-powered trucks and buses, and off-road diesel equipment and vehicles to estimate the equivalent reduction of carbon dioxide.

As ARB’s current efforts to clean up trucks and buses move forward, resulting in the continued cleanup and turnover of older heavy-duty diesel vehicles, California should continue to see declines in particulate matter emissions. Advanced engine emissions control systems and filters are expected to dramatically reduce emissions from all new diesel engines. Current diesel truck engines, for example, are over 90 percent cleaner than models from years when they were unregulated.

“If California’s efforts in reducing black carbon can be replicated globally, we can slow down global warming in the coming decades by about 15 percent, in addition to protecting people’s lives,” Ramanathan said. “It is a win-win solution if we also mitigate carbon dioxide emissions simultaneously.”

Black carbon has the effect of warming the atmosphere because it is effective at absorbing sunlight. However, it is emitted together with a range of other particle pollutants, including organic carbon, sulfur and other chemicals, some of which have a cooling effect, typically by reflecting sunlight. Reducing diesel emissions can therefore lead to a reduction of both warming and cooling particles. The report, however, is the first to confirm, based on both observations and computer modeling, that the warming effect of black carbon dominates, overwhelming any cooling effect of other pollutants. This confirms the positive impact reducing diesel emissions has on fighting climate change.

A copy of the full study can be found here.