One California law raising the state minimum wage to $15 an hour by 2023, and another setting up a retirement savings option for about 7 million private-sector employees whose jobs offer no pension or 401(k)-type plan, will significantly boost retirement income security for low-income workers and may help them avoid poverty in retirement.

That is a key finding of research released today by UC Berkeley’s Center for Labor Research and Education. It was conducted by Nari Rhee, director of the center’s Retirement Security Program.

She found that additional Social Security benefits resulting from the minimum wage law’s implementation, combined with the state’s Secure Choice Retirement Savings Program, can increase young low- and middle-income workers’ retirement income by about 50 percent, compared to baseline Social Security benefits. She notes that most of those workers are not now saving for retirement. 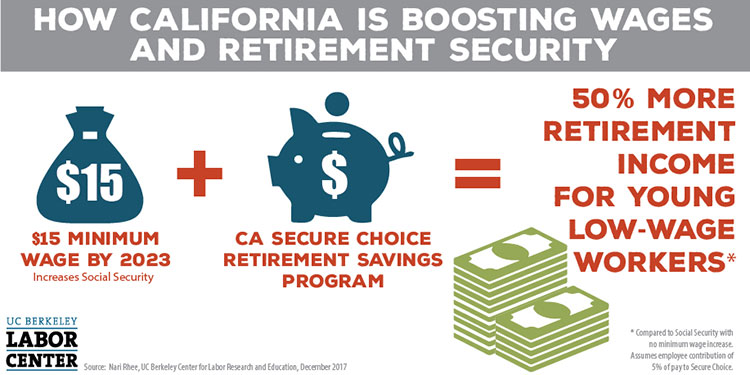 Rhee studies the retirement crisis facing California and the United States, where a stunning 44 percent of households between the ages of 25 and 64 have nothing saved in retirement accounts. In California, 64 percent of private-sector employees lack access to workplace retirement plans, according to Rhee’s analysis of U.S. Census Bureau data.

Her new report examines the retirement impacts of California’s minimum wage – which on Jan. 1 goes up to $10.50 an hour for employers with 25 or fewer workers and $11 an hour for those with 26 workers or more – and Secure Choice, which was authorized by legislation in 2016 and is scheduled to open for statewide enrollment in early 2019.

Some 70 percent of the state’s eligible workers are expected to take advantage of Secure Choice’s automated payroll deduction savings plan. The median annual income for those eligible is $28,000. Employers with five or more employees are required to facilitate employee participation in the program if they do not offer their own workplace retirement plan. However, employers will not contribute to the program, or be legally responsible for the program or its investments. The State Treasurer’s Office, tasked with implementing Secure Choice, will hire private financial service firms to administer the program.

A typical 25-year-old low-income worker contributing a steady 5 percent of their pay to a Secure Choice retirement account can save enough to generate $7,060 a year in retirement income in today’s dollars;  a 45-year-old could generate $2,250 annually.

The $15 minimum wage will increase lifetime earnings of the typical young low-income worker by about 20 percent, according to Rhee.

“A critical question for policymakers is whether future retirees will have sufficient income to support themselves, or require public assistance to meet basic needs like food and shelter,” Rhee says.

Rhee reports that increased retirement income from the higher minimum wage and Secure Choice can be expected to reduce poverty rates for the elderly, although low- and middle-income workers will still face a retirement income gap without additional policy interventions or more savings.

She warns that workers typically need to save 10 to 15 percent of their income during their working careers to avoid downward mobility in old age, and this is hard to achieve without employer contributions or increased income.

While the $15 minimum wage and Secure Choice “have strong potential to reduce the share of retiring workers who fall into poverty in retirement, there is still work to be done to ensure that all workers retire with sufficient income to meet the high cost of living in California,” the report reads.

The California State Treasurer’s Office offers breakdowns of how various groups were expected to fare in retirement, with each generation projected to retire poorer than the last, at least before the Secure Choice option.

A 2015 study overseen by Rhee found that California faces a fast-growing and increasingly vulnerable senior population and that the state’s impoverished elderly population will swell rapidly over the coming 20 years and beyond.

The tax plan pushed through Congress by Republicans this month is expected to result in efforts to cut Social Security and other social insurance programs, according to coverage by CNBC.