Every year, thousands of students come to Berkeley with vague ambitions to change the world. The annual Big Ideas@Berkeley competition is inspiring some of them to do just that — by launching globally life-changing innovations even before they graduate. Last week, the program honored this year’s winning projects with an awards celebration at the Blum Center for Developing Economies.

From building Africa’s first wind- and solar-powered radio station to promoting yogurt for improved child nutrition in Nepal to creating an app to show the safest nighttime routes on the Berkeley campus, the competition’s winning entries all demonstrated a strategic blend of technology and social innovation.

“We’re teaching our students to face a challenge, take a risk and use their educations for real-world impact and social good,” said Phillip Denny, Big Ideas program manager and chief administrative officer at the Blum Center. “We’re helping them to get ideas out of their heads and to put actionable plans on paper.”

In contrast to most other business-plan competitions, Big Ideas@Berkeley is focused on social change. The yearlong program, started in 2006, offers training and mentoring for teams of undergraduate and grad students. They learn critical thinking, market analysis and presentation skills to develop real-world projects that are both feasible and scalable.

The competition is supported by several Berkeley centers and institutes, as well as key sponsors such as the Andrew and Virginia Rudd Family Foundation, the Charles Schwab Foundation and the Center for Information Technology Research in the Interest of Society, or CITRIS. This year, the program also formed a new partnership with the crowdfunding site Indiegogo to better promote and fund the projects. 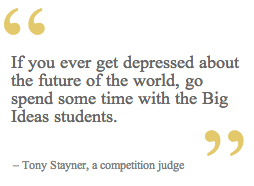 “It’s a very Berkeley-esque idea,” said sponsor and judge Andrew Rudd, who earned his MBA at the Haas School of Business. “These students are doing something positive with what they’ve learned, to bring the 21st century to parts of the world that don’t share our good fortune.”

The competition drew proposals from 187 teams of more than 600 students from 75 different majors, five UC campuses and four other universities nationwide. Judges recognized a total of 40 projects with awards from $1,000 to $10,000 across nine categories including open data, human rights, clean and sustainable energy alternatives, social justice and information technology.

“The diversity, quality and overall execution were really extraordinary this year,” said Denny. “The winning entries were chosen based on the combination of personal passion and a commitment to improving the world.”

Advancing the lives of those in poverty

First place in the “global-poverty alleviation” category went to ElectroSan, a system that improves public health and the environment by converting human waste into income-producing by-products. The process applies electrochemical cells to recover nitrogen from human urine and to disinfect feces, bringing affordable sanitation to poverty-stricken communities.

Inspired by a visit to the urban slums of Nairobi in 2013, Ph.D. student William Tarpeh seeks to introduce waste treatment to the 4.6 billion people in the developing world who currently can’t afford adequate sanitation facilities. The project is in the technology- development phase to ensure maximum nitrogen recovery.

“Connecting technology and international development was a great part of this experience,” explained Tarpeh, who’s working toward a doctorate in environmental engineering. “Big Ideas helped me to think at both the molecular level and the business-model scale to bring this to fruition.”

Rami Ariss, a junior in chemical and biomolecular engineering, and Othmane Benkirane, a junior in energy engineering and structural engineering, won first place in the “clean and sustainable-energy alternatives” category. Their project, Solidge, is a solar-powered refrigeration system that doesn’t rely on an electricity grid. Refrigerators are the most sought-after appliance in low-income communities; by integrating energy generation, storage and use into the same appliance, Solidge enables users to store food, unsold crops or vaccines for longer periods. The project will initially launch in Benkirane’s native Morocco, but will ultimately be deployed in developing countries globally.

Benkirane credits the Big Ideas competition with changing his career focus from new technologies to pressing energy needs in developing countries. “The Solidge project taught us to really listen to the end user,” he said. “Whether they’re graduates of prestigious universities, blue-collar workers or rural farmers in eastern Morocco, all of these people have equal insights, and Solidge taught me to look for the hidden ones.”

“Scaling up Big Ideas” was the category for previous contest winners who are further along in implementing their projects. First place went to a team led by Charles Salmen, a recent graduate of UCSF’s medical school, for a wind- and solar-powered radio station that reaches 200,000 listeners across Kenya, Uganda and Tanzania. An all-Berkeley team of Pablo Rosado and Hasit Ganatra, both Ph.D. students in mechanical engineering, and Caitlin Touchberry, a master’s student in development practice, took second place for ReMaterials, which provides roofing systems for communities in poverty.

More than a billion people currently live in slums worldwide, and adequate roofing is a critical issue for public health and comfort. The team has already developed a natural, recycled material mix and manufacturing process at the prototype level, and is now working on scaling up the manufacturing process, improving the supply chain and developing a sales and marketing strategy to attract investors and key partners.

“Last year we were focused on the engineering side, developing the materials and building small-scale roofs,” explained Rosado. “Now we’re looking for a mentor in law and finance to help us get the product to market. We’re going to India this summer to do a first round with our target audience.”

Participants uniformly credited mentorship as a critical component of the Big Ideas ecosystem. Tony Stayner, an angel investor and nonprofit board member, served as a Big Ideas judge and as a mentor to the ReMaterials project. He credited the program with increasing his own body of experience and his interest in social entrepreneurship.

“If you ever get depressed about the future of the world, go spend some time with the Big Ideas students,” he said. “They’re bright, creative, big-hearted and very passionate about making the world a better place.”