An unprecedented alliance formed among four elite West Coast universities aims to remedy a seemingly intractable nationwide problem: Too few underrepresented minority Ph.D. students in the mathematical, physical and computer sciences and in engineering are advancing to postdoctoral and faculty ranks at top-tier research universities.

The new consortium – the California Alliance for Graduate Education and the Professoriate– is being led by the University of California, Berkeley, and includes UCLA, the California Institute of Technology (Caltech) and Stanford University. The group has launched the project with a $2.2 million grant, which the National Science Foundation (NSF) provided to increase diversity in these targeted STEM fields at both universities and national labs.

Mark Leddy, the NSF’s program director, said the Alliance “draws on the strength of the institutions involved and is developing a model for moving the needle in this area.”

“As we become an increasingly diverse state and nation, this is a crisis,” said Mark Richards, UC Berkeley’s executive dean of the College of Letters and Science. “The participation of underrepresented minorities in academic STEM careers is especially important given the pivotal role that faculty members have as role models for future scientists and engineers.”

Together, the four schools are creating a unique, cross-institutional community of underrepresented minority Ph.D. students, postdoctoral scholars and faculty members in the targeted fields; developing faculty training to better recognize and help these students thrive and advance; and conducting research that includes annual surveys of Ph.D. students about what factors impact their attitudes, experiences and preparation for the future. 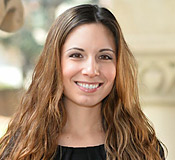 "Not everyone is made to go into these academic careers,” said Rebecca Hernandez, a Stanford Ph.D. student in environmental earth system science who was the first in her family to attend college and aspires to a tenure-track position at a top research university. “But if we want to change the demographics, we have to have underrepresented minorities applying for faculty positions. So, what is it that’s making people feel discouraged? It’s a multi-factor problem.”

Together, the four schools in the California Alliance produce almost 10 percent of the nation’s underrepresented minority Ph.D.s in the science and engineering fields that the Alliance is targeting. With UC Berkeley and Stanford in the north, and Caltech and UCLA in the south, they span the nation’s most populous and ethnically diverse state, are each other’s closest peer institutions and are similarly ranked.

“We do often compete, so it’s important that we have united to address ethnic underrepresentation in these STEM fields,” said Joseph Shepherd, dean of graduate studies at Caltech and a professor of aeronautics and mechanical engineering. “The California Alliance brings together an extremely rich source of talent, brain power and resources to provide a model of best practices for moving talented STEM students into the professoriate and workforce.”

Individually, the four institutions have explicit policies and commitments to increase diversity, and model diversity programs to recruit, retain and advance underrepresented minority students – African Americans, Hispanic Americans, American Indians, Alaska Natives, Native Hawaiians and other Pacific Islanders – in these STEM fields. But while the share of Ph.D. students from these groups has been increasing very gradually for decades, California Alliance data show that “there continues to be significant fall-off at each level of the pipeline – 10 percent for new Ph.D.s, 9 percent for continuing Ph.D.s, 8 percent for conferred Ph.D.s, 6 percent for postdocs and 4 percent for faculty,” said Jerry Harris, associate dean for multicultural affairs in the Stanford School of Earth Sciences and a professor of geophysics.

While some of the California Alliance’s research will focus on which diversity programs are most effective with these Ph.D. students, much already is known about the issues minority students can wrestle with as they think about a career, said UC Berkeley psychology professor Rudy Mendoza-Denton, who is research director for the Alliance’s data collection and analysis work.

“A sense of community and belonging are important aspects of any academic endeavor,” he said, “and mentorship and feeling support from one’s mentors are important predictors of a student’s success and choice of profession. If all the professors that you interact with on a daily basis don’t look like you or can’t relate to you, it’s an issue, and a cycle that feeds on itself. If students don’t see themselves represented on university faculties or in national labs, they can feel their place isn’t there, that they’d be swimming upstream alone.”

Sidney Hill, a Ph.D. student in UC Berkeley’s College of Chemistry, said he loves his department and finds the environment supportive, but longs for “more people like me, more African American males in chemistry.” He has a diverse group of friends, but said his African American peers, who are in other academic fields, “find it difficult to relate to the 12 hours a day I spend in the lab behind a hood doing wet chemistry.” Of the 403 Ph.D. students in the chemistry department, only five are African American. Nineteen are Chicano/Latino and two are Native American/Alaska Native.

Jeremy Brown, a Ph.D. student in geophysics at Stanford, said his university makes him feel welcome and aggressively seeks to help its minority students. But of the 82 students in his program, there are only two underrepresented minority students – Brown and a Hispanic woman. Among the program’s 18 professors, there is one underrepresented minority faculty member; he is African American.

Brown is eyeing a career in the private sector doing energy exploration, but acknowledged that, “it would have made a big difference if I’d had professors who were minorities, and if I’d had a mentor as an undergrad, or even in high school, to point me toward an academic profession, and that I’d seen someone in that profession who was a minority.”

Hernandez, the only Latina among her department’s 51 Ph.D. students, said she wishes for female mentors who are in her STEM field and also from an underrepresented minority group to talk with and reassure her about many issues, including whether she could have a healthy work-life balance as a professor, and be able to afford high living costs. “These issues divert my attention from my research,” she said, “and make me feel like I have to have a back-up plan.”

Graduate students of color “are highly influenced by whether their department has a critical mass of people that are similar to themselves,” said Carlos Grijalva, associate dean of the Graduate Division at UCLA and professor of behavioral neuroscience. A Hispanic American who was the first in his family to attend college, Grijalva is one of eight underrepresented minority professors on the psychology department’s 74-member faculty. He said, “I also tell my students, ‘If I can do it, you can do it.’”

The California Alliance’s plans include building a “community of practice” that will bring together through select activities underrepresented doctoral students from all four universities who share educational backgrounds, ambitions and similar types of Ph.D. preparation in closely-related disciplines.

At an annual retreat – the first one will be at Stanford April 4-5 – students will attend sessions and workshops to build networking, communication, project management and other skills. It also will be a venue where schools and national labs seeking postdoctoral fellows and new faculty can meet students looking for jobs.

The Alliance also will nurture social-professional networks of Ph.D. students, faculty and research scientists. For example, students will be funded to travel to other Alliance institutions to visit, give a talk or meet another research group or a potential mentor to increase the likelihood that they will land a prestigious postdoctoral or faculty position.

Anastasia Chavez, a Ph.D. student in UC Berkeley’s math department, where six of the 58 ladder-rank faculty members are women, but no professors are from underrepresented minority groups, said the Alliance’s plan for “broadening the community network, the village” sounds beneficial. Even if she were paired with a faculty mentor at another university, Chavez said she would value “someone who agreed to read your email, offer feedback, take to heart your personal situation and ‘open the window’ for you.”

Other California Alliance strategies include a competition for funding for Alliance postdoctoral positions and an online searchable database of Alliance participants and their research interests to help the four schools, national labs and other institutions identify and recruit future postdoctoral scholars and faculty.

“The California Alliance institutions already are providing remarkable opportunities for graduate students,” said Richards, who also is UC Berkeley’s dean of mathematical and physical sciences and a professor of earth and planetary science. “The issue is that we have to do something above and beyond what’s standard in graduate education to give all students a sense of belonging.”