For many Southeast Asian refugees, the current violence in Afghanistan and Ukraine is like an instant replay of a painful history that few can forget.

If little is taught about the Vietnam War — a misnomer, because the war was not confined to Vietnam — even less is known about Cambodia and the U.S. intentional destruction of that country to secure a supposedly honorable exit from Vietnam in April 1975. What followed was a genocide that decimated almost a quarter of Cambodia’s population and rendered hundreds of thousands of families and individuals stateless: I was one of them.

And though it has been over four decades, everything seems so present to us, yet largely invisible to the rest of America.

I was born in Phnom Penh, Cambodia’s capital city, and grew up in a very traditional Cambodian family. My father was a Cambodian ambassador to Burma, now called Myanmar, and was returning to Cambodia when the country fell to the communists in 1975.

The Burmese government recognized the new Cambodian government and threw us out of Burma. The only refuge we could find was a refugee camp in Thailand. We later learned that, except for our little family, all of my aunts, uncles, cousins — down to an 18-month-old baby — had perished during the genocide.

The world as we knew it had ceased to exist.

I once wrote about the rupturing effects of the Cambodian genocide, and a reviewer queried: “Is this really rupture?” I know no other word to describe this.

From the Thai refugee camp, we were admitted to the United States and placed in Camp Pendleton in San Diego. We had no choice where we ended up. One plane took off, and it landed in California, the other in Pennsylvania. For refugees, nothing is certain except uncertainty.

It is difficult to imagine that there are refugee camps in America. These are places of exception.

I remember looking out beyond the hills that surrounded the camp and seeing a glimpse of cars driving in the far distance. And I remember thinking, “That’s America. That’s normal life. People going to work, children going to school.”

I felt very envious of them.

It wasn’t that I loved school, it was just that it represented normalcy, and I wanted to be like other kids. We were on American soil, but isolated, and could not leave the camp without being sponsored by someone who could be financially and legally responsible for us. Many sponsors who came into the camps were looking for cheap labor to work on the farms or the timberland of the West Coast. My family was one of the last to be sponsored.

The early years were challenging because, except for some 200 students and individuals in training programs, there was no Cambodian community in the U.S. prior to 1975 — hence, no co-ethnic support for new refugees.

Whatever we have today, the community organizations, temples, heritage programs, we built from scratch, with little resources except our own resourcefulness. A rundown studio became a place of worship. Self-taught refugees crafted traditional violins from K-mart baseball bats, because music is essential to Khmer weddings.

It was that inner and collective fortitude that inspires my work today. I always think back to that time in 1975 when some Cambodian college students brought clothes and food for us at Camp Pendleton. They made a difference in refugee lives in ways that they themselves did not even realize.

That one can profoundly impact someone’s life through small acts stayed with me.

Those early experiences taught me a great deal about leadership and mobilization that became useful later on, when I had the opportunity to lead some of the national Pan-Southeast Asian organizations.

The first generation of path finders

Nomadism may be a celebrated feature of our global age, but there is nothing glamorous about exile. It is impossible for people who have never experienced it to understand what it means to have to rebuild your entire life with just one piece of luggage and $10 in your pocket in a country where everything is completely foreign, and where you are not always welcomed.

My generation was the first to grow up in America, so we had no reference point for anything. Even the simplest act was a struggle. We struggled with the English language, with educational disruption because of the war and the camps. We struggled with daily living. It was also a new world for our parents, so there was no one to help us navigate life in America. We had no knowledge of what it took to finish high school, let alone get into college.

In America, English is the language of power, and without it, you are less than a person. Teachers have preconceived notions of what you are capable of doing or becoming, simply because you are an English learner.

Even though I had stellar grades, no teacher or counselor ever spoke to me about college or gave me information about scholarships or financial aid. What we knew, we had to find out on our own — and often too late.

I remember despairing at the thought that if I wanted to pursue higher education, I would have to be able to put myself through college and also help support my family. That’s a lot for a teenager.

Even in my generation, not very many Cambodian women pursued higher education, and virtually no one went away to college because women did not move out of their parents’ home until after marriage.

When I was accepted to Berkeley, my family had to confront the prospect of me leaving home and living on my own as an unmarried young woman. It was unprecedented for our community. It was my mother who advocated most forcefully for me. Though she was raised in a very traditional household, she firmly believed in education for women.

Things have changed since, and many Cambodian women have gone off to college and succeeded. But looking back, I often joke that, unlike my peers, I did not have the luxury of just worrying about exams. I had a whole community watching and waiting for the outcome of the very courageous decisions my parents made.

In college, we encountered different challenges. Many values that were instilled in us as Khmer — modesty and humility — are not necessarily valued in academia. If you are quiet about your achievements, people just assume that you haven’t done anything.

Refugee before all else

I did not choose academia — it chose me.

Growing up, I never thought of being an academic. I never even thought of majoring in political science until very late in my undergraduate career. I came from a family with long histories of exile. Politics had not been kind to us.

My parents also worried about the challenges of pursuing such a major as a newcomer to the English language.

As refugees, we always have to be practical.

What set me on this path was a chanced enrollment in a political science course. I read texts about wars and revolutions in Southeast Asia that had no resonance with what we went through. Cambodia and the Cambodian people were also completely invisible, erased from these history texts.

After almost 100 years of French colonization, scholarship on Cambodia continues to be largely written by non-Cambodians. Where are we in our own history?  Where are our voices? 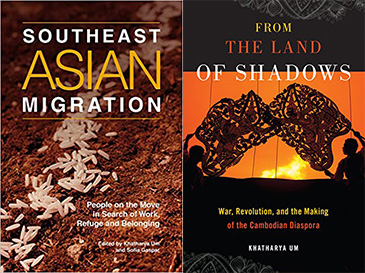 That’s when I decided that we have to write our own history.

I found a home in ethnic studies because of its intellectual and political investment in the histories and lived experiences that have been peripheralized and erased. What I wanted to produce is scholarship in which the people, their experiences and their voices, are recentered and foregrounded. The kind of scholarship that is not about us being studied or spoken about, but us speaking for ourselves and narrating our own stories.

It is this paradigm shift that the Critical Refugee Studies Collective that I cofounded seeks to advance.

The gift and the burden

Coming out of the genocide, time is against us.

Few survived the genocide, and I have yet to find a single Cambodian family that hasn’t lost someone. This collective trauma informs who we are as a community. The death of virtually a whole generation — including of artists and artisans — also meant cultural destruction, because much of our tradition is oral.

We are fighting against time to recover the missing histories, to preserve fading memories, so that we can bequeath them to posterity. Much is lost already, and more of that history is lost every day with the passing of the survivor generation.

That’s what consumes me every day.

But the process of archiving memory is a difficult one because in the Khmer culture, speaking about oneself is not something that is valorized. So, losses and pain are buried beneath the silence that hovers over the Cambodian American family, exacerbating the generational trauma.

It is imperative that this history is preserved and transmitted, because it allows the younger generations to locate themselves in something bigger — in a longer genealogy. It allows them to understand that history that haunts them transgenerationally.

To be one of only three Cambodian American professors in the UC system is a real privilege, but it is also a huge responsibility.

There are so few of us who have made it through the door that we have to make sure that the door is not closed to others. Hopefully, the path that we have walked can be smoother for those who follow.

Sadly, many young Southeast Asian students are still struggling to deal with systemic racism, with identity, with navigating multiple worlds, expectations and obligations. Only 14% of Cambodian Americans have a college degree. A large part of that struggle is making sense of the history that continues to weigh on them, but that is largely unacknowledged.

That is why the Southeast Asian Student Coalition (SASC) was formed. It was a much-needed space for students from different ethnicities — Cambodian, Hmong, Vietnamese, Laos — to rise above their fraught histories, come together in recognition of their shared experiences, and forge new forms of solidarity.

The SASC Summer Institute that the group created is also an important pipeline for Southeast Asian high school students, whose struggles are obscured by the model minority myth. We hope to expand that space to include new refugee students.

I see my research, teaching and community work as an extension of each other.

In mentoring students, I am not simply teaching them how to do good research or to think and write analytically. I am seeking to empower them to believe in themselves, to valorize their Southeast Asian heritage, to believe in the importance of researching and preserving the stories that have been bequeathed to them.

This helps reaffirm their sense of self, their values, their identities as Southeast Asians, as refugees, and also their sense of loss. That has to first be acknowledged before it can be reconciled.

When I first entered academia, Southeast Asian concerns were virtually absent in the curriculum, even in Asian American studies. Even Cal was an intellectually lonely place to be. What we have built over the years was not just a field of study. We have built an intellectual and a political home for our students.

What students discover through our classes are hidden stories, hidden valor and unrecognized fortitude. These they carry with them on the rest of their journey. In recovering our history, we recover ourselves.

And in reclaiming our past, we reclaim our sense of futurity. I think that is the greatest legacy that anyone or any institution can impart.

That is the true meaning of education.