Adam Arkin, director of Berkeley Lab’s Physical Biosciences Division (PBD) and a biologist who is recognized as a leading authority on the evolutionary design principles of cellular networks and populations and their application to systems and synthetic biology, has been named one of six recipients of the 2013 Ernest Orlando Lawrence Award by U.S. Energy Secretary Ernest Moniz. The E.O. Lawrence Award, the Department of Energy (DOE)’s highest scientific honor, is recognizing Arkin “for his work advancing biological and environmental sciences.”

In announcing the awards, Secretary Moniz said, “The Lawrence Award recipients announced today have made significant contributions to the national, economic and energy security of the United States – strengthening U.S. leadership in discovery and innovation. I congratulate the winners and thank them for their work on behalf of the Department of Energy and the Nation.”

Said Berkeley Lab director Paul Alivisatos, himself a winner of the 2006 Lawrence Award, “Adam Arkin has been at the forefront in the scientific fields of systems and synthetic biology. He has made major contributions to our general understanding of the evolutionary design principles behind cellular networks and populations, and how these principles might be applied to technologies related to health, the environment and bioenergy. We’re proud that DOE has recognized the importance of Adam’s work and his accomplishments  through this Lawrence Award.”

Arkin is also the Dean A. Richard Newton Memorial Professor for the University of California Berkeley’s Department of Bioengineering, PI/CEO/CSO of the Department of Energy’s Systems Biology Knowledgebase, Technical Co-Manager of the ENIGMA SFA, Directs the Synthetic Biology Institute, and is an investigator of the Energy Biosciences Institute.

“I am very flattered to be recognized by the Lawrence Award in honor of Ernest Lawrence who brought together and was buoyed by brilliant teams of scientists  working together to accomplished great things,” Arkin said. “I am grateful that my colleagues, and mentors at Berkeley Lab, DOE headquarters and the University of California have given me the chance to work with them towards goals of similar scope and ambition in biology to those Ernest Lawrence had in physics. My laboratory and my many collaborators on synthetic and systems biology projects are an inspiring driving force behind the work and they truly share in this award.” 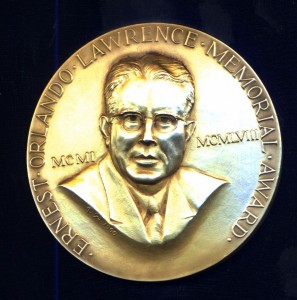 The thrust of Arkin’s research has focused on developing physical theory, computational tools and experimental approaches for understanding the cellular processes that are critical to life. The goal is to provide a framework that will facilitate the design and engineering of new functions and behaviors in cells through synthetic and systems biology. He once compared synthetic biology to computer design and said, “Most genetic engineering has been done by hook-or-by-crook. It takes a lot of trial-and-error to build simple things into cells, like the ability to produce a lot of a functional protein. We want to actually program cells as if they’re computers or design them as if they were advanced aircraft so they can do much more complicated tasks of benefit to society.”

Most recent among his many successes were the unveiling of a package of public domain DNA sequences and statistical models that greatly increase the reliability and precision by which biological systems can be engineered, and a study that challenged the orthodoxy of microbiology by showing that for bacteria in the laboratory there is little evidence of adaptive genetic response. In fact, most bacterial genes appear to be regulated by signals unrelated to their function.

Arkin received his undergraduate degree in chemistry from Carleton College in 1988 and his Ph.D in physical chemistry four years later from the Massachusetts Institute of Technology. He then pursued postdoctoral studies at Stanford University in chemistry with John Ross and in developmental biology with Harley McAdams and Lucy Shapiro. In 2000 he was featured in a special edition of Time magazine on “Future Innovators,” is a member of the first class of the Technology Reviews TR100, and in 2007 he was elected as a Fellow in the American Academy of Microbiology.

The recipients will receive a medal and a $20,000 honorarium at a ceremony in Washington, D.C., later this year.