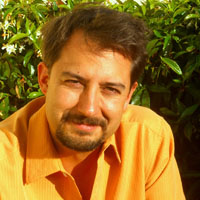 The geo-political map of the world changed many times through the nineteenth and eighteenth centuries but historian Brian DeLay sees a fresh narrative to help make sense of this transformation. At the center of it are characters that were as powerful in the past as they are today—and often as shadowy: the manufacturers and middlemen of the arms trade.

The development and trade of modern weapons is the thread—or, as DeLay puts it, the “iron web”—that connects each separate national or ethnic story, one that traces the transformation of the Americas from the colonial age into the rise of independent nation-states.

“It’s the intersection of capitalism, technology, law and geopolitical power that interests me most in this story,” says DeLay a specialist in the 19th century Americas. “All of these things are interconnected and in tremendous flux during the long nineteenth century. The arms trade is a neglected but revealing lens through which to view this complex story.”

His ongoing research, to be captured in a book titled Iron Web: The Arms Trade and the Re-creation of the Americas 1750-1920, will trace the story of guns from their manufacture in American and British shops and factories to their distribution throughout the hemisphere, either in battle or as cast-offs sold to smaller countries or militias.

By 1750, nearly the whole of the Western Hemisphere had been claimed by a few European empires but was still mostly under the control of Indian peoples, DeLay says. By World War I those European empires had largely been swept away and native autonomy had been extinguished nearly everywhere but the Amazon and the Arctic.

Technological revolutions play a large role in the story. In the mid-19th century there began a startling change in weapons technology and production.

“The muskets used in the Seven Years’ War or the War of 1812 were basically the same as 300 years before. But radically improved weapons began transforming conflict by the time of the American Civil War,” DeLay says, “and by the early twentieth century, military aircraft, machine guns, modern warships, and advanced artillery were being deployed around the hemisphere.”

These advances came along with the industrialization of the arms industry, which vastly increased the scale of production and made arms much easier to acquire in volume. Industrialization also concentrated weapons production into fewer and fewer hands as firms merged or disappeared in the increasingly cutthroat and high-stakes international market.

The story is complicated by the fact that no clear international law governed these transactions. Neutral states insisted on their rights to trade with “belligerents” and major producers sometimes even boasted about arming both sides in a conflict. Few major players maintained consistent arguments. Tecumseh’s Shawnee Indians received weapons from Britain during the War of 1812, much to the consternation of the United States, but the countries reversed positions just a few years later when Britain complained bitterly that Irish rebels were receiving arms shipments from Boston.

It has become a familiar story: The government of a small but strategically important nation needs support to fight off insurrection. The United States supplies weapons to the small country but just a few short years later, the very same government has become an enemy. Substitute “United States” for Britain, the Netherlands or any number of suppliers from the vast, unofficial global network, and this could be a scenario from the late 18th century all the way up to the present day.

DeLay follows the guns, from the Caribbean arms-trade hubs that equipped the American and Haitian Revolutions, to the arms that traders and rival powers funneled to Indians throughout the hemisphere, to the U.S.-made rifles that helped fuel conflict throughout nineteenth and early twentieth-century Latin America. The stories span the globe. From the 1840s through the 1910s, for example, Mayan Indians sustained a bloody rebellion against Mexico. They armed themselves with carbines made in Birmingham and gunpowder made in India, all funneled quietly from Jamaica and Barbados to British Honduras and finally to the Maya in Yucatan.

Part of DeLay’s research involves reviewing the archives of major arms manufacturers and trading firms. This summer he’ll be in Wyoming, working with the records of the Winchester Repeating Firearm Company, as well as archives of large weapons exporting firms.

“As the weapons became more complex, politicians began to rely on manufacturers and top merchants as experts,” he says. “That’s when we began to see the kind of cozy relationships develop between industry and government that Eisenhower famously labeled the ‘military-industrial complex.’”