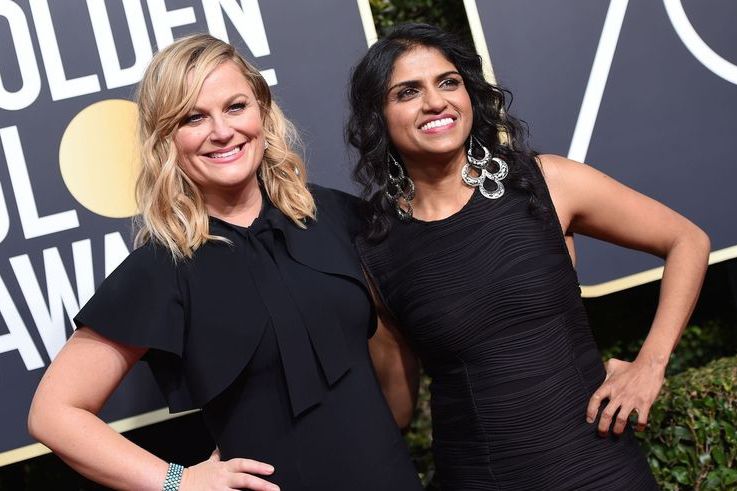 Saru Jayaraman, director of UC Berkeley’s Food Labor Research Center, was actress Amy Poehler’s date to the Golden Globes last night. The actress told Elle that she wanted to draw attention to Jayaraman’s research, which shows that in restaurants, female servers making low wages and fighting for tips are often subjects of harassment from employers and customers.

In some states the minimum wage for servers who make tips can be as low as $2.13 an hour.

“You live on your tips so you have to tolerate whatever a customer does to you because they are always right,” Jayaraman told Berkeley News on Monday. “When you actually give workers a living wage, then the woman is not as dependent on tips to feed her family. She doesn’t have to deal with anything and everything. She can say no, and she can refuse to serve a customer.”

Poehler, who worked in restaurants before she was the star of shows like Saturday Night Live and Parks and Recreation, told Elle that Jayaraman is “my partner in a much bigger movement. Not a lot of people go to the Golden Globes, but everyone has either worked in or eaten in a restaurant, and she’s working specifically on legislation to help reduce the amount of harassment.”

Like many attendees of the award show, both Poehler and Jayaraman wore black on the red carpet in support of the Time’s Up anti-harassment movement. Jayaraman said that attention from Hollywood has already encouraged New York Governor Andrew Cuomo to push for raising the minimum wage for tipped workers in his state. She hopes the 42 other states that allow lower wages for tipped workers will soon follow suit.

“One in two American adults works in this industry,” Jayaraman said. “When working in a restaurant is the first job for half of American women, and they’re told on their first job that they need to dress a certain way or put up with harassment, that sets the standard for the rest of your life, that’s the essentially the message.”

And as for the red carpet? This was Jayaraman’s first, but she couldn’t help but appreciate the political messages shared by many stars.

“Everybody universally said this was the most memorable, most enjoyable, most meaningful event they had ever been to,” she said.