Margaret Conkey, a UC Berkeley professor emerita of anthropology known for her pioneering exploration of feminist perspectives and gender issues in archaeology as well as new interpretations of European cave paintings from the Paleolithic era, is the Royal Anthropological Institute’s 2017 Thomas J. Huxley Memorial Medal recipient.

The highest award of the oldest anthropological organization in the world is bestowed in honor of Huxley, a British biologist, an early follower of Charles Darwin and a founder of the journal Nature who helped popularize Darwinism.

The medal has been issued annually since 1900 — except for four years during World War I. Conkey is only the 14th woman to receive the award. 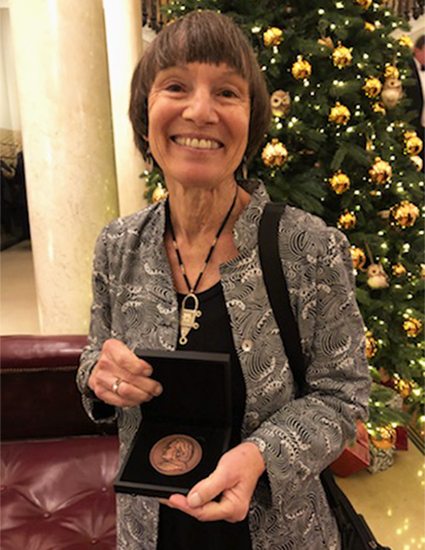 “For me, this was an extraordinary, never anticipated award,” said Conkey, who was presented with the Huxley medal during a ceremony at the British Museum in London in mid-December.

She has been deeply involved with debates around the interpretive process for understanding the social contexts and manifestations of what are called Paleolithic cave art, examples of which are found at the well-known sites of Lascaux in France and Altamira in northern Spain.

Conkey counts herself among those who find the application of the term “art” to cave art problematic and instead consider the images to be material manifestations of many motivations, so that no single explanation can cover their 25,000-year history.

“We think this was not just an artistic revolution (which is how most accounts present these striking images) but also a social revolution, that making these images became a critical part of sustaining (Paleolithic) communities,” Conkey noted in an interview with the College Street Journal, the Mount Holyoke College newspaper.

It was this focus on the probable social contexts — within which cave and portable image- and artifact-making was meaningful — that led Conkey to her pioneering, long-term project in the French Midi-Pyrénées, where she began a survey for open-air Paleolithic archaeology in a region known almost completely for its cave sites.

The project, called Between the Caves, has led to the recovery of thousands of stone tools from the Paleolithic periods.  Dozens of Berkeley undergraduates and graduates, along with professor William Dietrich of Earth and Planetary Sciences, have participated in the effort.

Their site survey led to discovery of a unique open-air archaeological site, Peyre Blanque, that dates to about 19,000 years BP (Before the Present), where the so-called Magdalenian peoples, with a distinctive stone tool technology, constructed a stone structure or hom, stretching at least 10 meters.

At the December award ceremony, Conkey delivered a lecture touching on her research experiences and highlighting the Between the Caves project as well as Peyre Blanque’s discovery and findings.

She called for constant reexamination of the anthropological record going back to pre-history, or what she and others call deep time or deep history, and suggested how best to draw on feminist principles when conducting archaeological research of sites from so long ago.

“With inquiry into deep time,” Conkey said, “we have to be more engaged and delighted by the ambiguity of all archaeology, to resist certainty despite the public acclaim for it. We might think we ‘know’ something at this point, but we should be prepared to revise and revise, to probe into differences and to engage with what only a philosopher could love as a term, ‘ontological heterogeneity.’

“By being explicitly engaged with the need to diffuse power – among researchers, among preferred narratives, sources of evidence – and to understand how the context of the production of knowledge leads to the nature of the knowledge that is produced, we are less likely to overlook the marginalized ideas, concepts, evidence, knowledge-makers and to have a view into the ways in which inequalities are at work.”

As to how the field has changed since she began, Conkey said that it has experienced a “veritable revolution in the development of new methods,” many of which are increasingly sensitive to other stakeholders in the production of knowledge about the past.

While there has been an increase in the diversity of practitioners — something  that Berkeley anthropological archaeologists have long been serious about — Conkey observed that “we nonetheless still need to broaden the sweep of who has contributions to make concerning the very complex and intriguing human past.”

Conkey earned bachelor’s degrees in ancient history and art at Mount Holyoke College. She later received a master’s degree and a Ph.D. in anthropology from the University of Chicago.

She joined the anthropology department at UC Berkeley in 1987. She held the Class of 1960 Chair in Undergraduate Education and directed UC Berkeley’s Archaeological Research Facility, where she developed a program sending graduate students to local schools and bringing school groups to campus for hands-on activities and lab tours.

Conkey has taught courses on the prehistoric arts, as well as seminars on “Has Feminism Changed Science?” and “The Cave Man Mystique” that probed how the persistence of “being a caveman” has muddled contemporary notions of masculinity.

She received a Social Sciences Distinguished Teaching Award in 1996, and, among other campus awards, earned the Chancellors Award for Advancing Institutional Excellence in 2009. She also served as president of the Association for Feminist Archaeology of the American Anthropological Association from 1997-1999, and was elected a fellow of the California Academy of Sciences in 1998.

Conkey was named one of the 50 most important women in science by Discover magazine in 2002.

She was president of the Society for American Archaeology from 2009-2011, and was honored with the society’s lifetime achievement award in 2016. She became an emeritus professor at Berkeley in 2011.