A team led by Lawrence Berkeley National Lab (Berkeley Lab)’s Ashok Gadgil is the recipient of the 5th Prince Sultan Bin Abdulaziz International Prize for Water. Gadgil, head of the Lab’s Environmental Energy Technologies Division and a Professor of civil and environmental engineering at the University of California, Berkeley, will receive the Creativity Prize on behalf of the team.  The prize recognizes his team for developing an innovative technology for affordable arsenic-safe drinking water in Bangladesh and nearby regions.

The bi-annual prize is named after HRH Prince Khaled Bin Sultan Bin Abdulaziz, Saudi Arabia’s Assistant Minister of Defense and Aviation and Inspector General for Military Affairs. The prize comes with 1 million Saudi riyals (about $266,000) and a distinctive trophy. 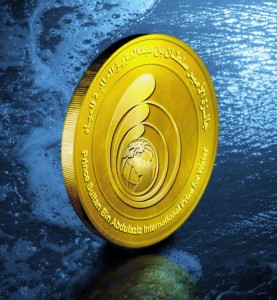 The award citation noted that Gadgil received his recognition for “research [relating to] one of the greatest problems currently facing the water supply: the arsenic contamination of groundwater.” The citation continues: “The Creativity Prize is being awarded to Dr. Ashok Gadgil’s team at UC Berkley for developing an economical and effective way to treat arsenic contamination and restore the groundwater supply to potability for millions of poor people around the globe. Together, these achievements promise to save countless lives.”

Says Gadgil, “We are pleased that this prize recognizes the depth of our scientific research.  This ranges from analysis of materials using synchrotron-generated x-rays, to engineering design, and also the breadth of our work that spans social sciences, economics, consumer and organizational behavior, and financially viable business models.”

Arsenic in drinking water occurs naturally in high concentrations in certain areas of the world, including Bangladesh, and is believed to be poisoning as much as 50-percent of that nation’s population.

“My team members and I are thrilled that the international committee of distinguished water experts for this Prize selected our work,” says Gadgil, “which truly represents a team effort.”

The awards ceremony will be held in Riyadh, Saudi Arabia, in January of 2013.