More than two weeks have passed since Election Day in the United States, and though former Vice President Joe Biden emerged the winner after a few days of uncertainty, the controversies over legitimacy continue to provoke fury among President Donald Trump and his allies.

Trump has refused to concede to Biden, much less to congratulate him. His administration has refused to share briefings on the COVID-19 pandemic and national security with the president-elect and has blocked the procedures required for a transfer of power.

Political scientist Susan D. Hyde, a UC Berkeley expert on democracy and “democratic backsliding,” views this conflict with some alarm. American democratic institutions are resilient, she said in a recent interview, but the question is: How much stress can they take before they suffer long-term damage?

Trump has tested democratic norms, and as he continues to contest the election results, Hyde said, the torrent of disinformation from the White House and the silence of most other Republican leaders is compounding the potential damage.

Hyde has travelled extensively for research on election observation, and she has worked with top international democracy-promotion organizations. Her article, “Democracy’s backsliding in the international environment,” was published recently in the journal Science.

[This interview has been edited for length and clarity.]

Berkeley News: As a scholar in democracy and democratic backsliding, how are you looking at the current post-election moment in the United States?

Susan D. Hyde: I’m seeing the current moment as one that I hoped that we wouldn’t see in the United States, but that every country with democratic institutions is somewhat vulnerable to. Democratic backsliding can be very subtle. It’s akin to hollowing out the inside of a tree: You don’t know how far you can go before you kill it.

Regarding the tension and conflict around the transition to a new president — is Trump simply unhappy that he lost? Or is there something deeper underway, in which the president and his allies are weighing their commitment to core democratic principles?

Many people, I know, are very much focused on the worst-case scenario, in which he tries to stay in office beyond the deadline for his departure. It’s impossible to be certain what he’s thinking at this juncture. Yes, he has been a sore loser. It’s possible that he is trying to use this as a fundraising opportunity. He’s clearly not attempting to govern right now.

I’m confident enough in U.S. institutions that I think he will have to leave. But it’s concerning that other leading Republicans have not come out in stronger support of normal U.S. democratic processes. There are real national security risks and other problems that result from that.

And the disinformation that he is sending out directly to his supporters about election fraud is damaging to U.S. election integrity and probably to the ways in which those voters will interact in the political system going forward. So even if he’s just being a sore loser, his actions are consequential. And that is problematic.

A similar question about Republican leaders: Are they just making a routine political calculation, showing loyalty to their candidate or their party? Or are they considering a deeper choice, whether to sacrifice democratic norms in order to keep a hold on power?

They’re in some ways playing a dangerous game. I’m not an Americanist, and I don’t study American politics most of the time. But from what I can read in the news and infer from what’s being leaked, a lot of people are saying they don’t want to be in the business of confronting the president, that his supporters are able to mobilize against Republicans who do confront him or who do stand up to him in a way that they just don’t want to deal with.

The Lincoln Project folks and Republican Voters Against Trump, are out there saying he needs to concede. It’s not that they’re the biggest fans of Biden, but that they’re putting their country above their party. And that type of language is what we see in a lot of countries that successfully address these threats to democratic institutions.

The ability of Trump to lie successfully to his supporters is really pernicious because we now have a whole bunch of voters living in what appears to be a fact-free world. That is one of the biggest problems that I’m worried about in the longer term, and it’s a problem we’re seeing in a lot of other countries around the world. 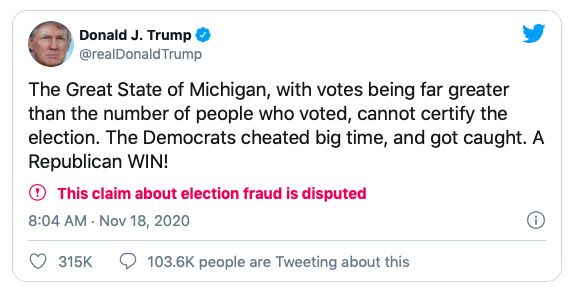 Is it right to think of the United States as a country where democracy is eroding?

One of the virtues of democratic institutions is that they can bend without breaking much more than authoritarian regimes can. But it is hard to see in the moment. I am worried about the lasting damage to U.S. democracy that’s being caused right now, and I think it is too optimistic to say that we’ll just snap back to a more democratic process, to where we were.

One other thing to think about is that U.S. democratic institutions had a lot of well-documented issues before this election. For a lot of people in the United States — they haven’t been living in a very democratic system for a long time. Confronting those issues could lead us to a place, ultimately, that’s more democratic than before.

What are some of the issues that pre-date the Trump presidency?

Obviously, it used to be that only white men could vote. Even after Black people were given that right, the literacy tests to vote, the lynchings and other efforts to try to intimidate Black communities or Native American communities from participating in politics — that history is certainly relevant to this conversation. The tactics have changed, but the general sentiment has changed too little.

The more contemporary efforts that contribute to democratic backsliding involve this effort to interfere in the judiciary, to pack the courts, a lack of respect by political actors for rule of law, and the attacks on the media. Some of the legal but polarizing actions, including gerrymandering of congressional districts, continue to be problematic.

In the popular imagination, democracy is all about government action reflecting the will of the people. But it’s striking right now that 77% of Trump’s supporters, and 32% of voters overall, think the election was not free and fair. Is this a signal of backsliding?

I’ve seen conflicting public opinion polling on questions like this. I’m a little curious how this will play out in the weeks to come as those conducting these polls try to get a really reliable measure. It does not help that Trump is still tweeting his lies about the quality of the process — by all credible accounts thus far and the evidence that has been made public, the allegations of election fraud are baseless.

A lot of people do seem to be looking at his administration and saying, ‘That’s fine.’ My hopeful side thinks that they feel that because they’re following party leaders — that’s the Republican Party’s position right now. But public opinion could change if more elected officials in the Republican Party put democracy and loyalty to their country over loyalty to Trump.

Returning to my rubber band metaphor. The properties of democratic institutions and how flexible they can be without lasting damage may have a lot to do with what the public will tolerate.

Are pro-democracy forces in the U.S. doing a good job right now? What do they need to be doing?

It’s hard to know how to stop the pockets of disinformation, misinformation, and conspiracy theories. That’s one of the most important questions for scholars of democracy to confront, because this is a fundamental threat to how democracy works. Until you can pierce that bubble of disinformation surrounding so many voters right now, pro-democracy leaders and institutions can keep talking, but this part of the world is not going to pay attention to them.

Business leaders, including social media companies, could do more to defend democracy in the United States. Some political leaders are doing the right thing, like former President George W. Bush’s statement after the election defending the integrity of the election. But Mitch McConnell has a lot of power right now to do something more than he is doing to defend U.S. democracy and to prevent further damage.

Defending U.S. democracy should not be a partisan issue, and the fact that it has become one is itself a sign of democratic backsliding.

Do I think enough is happening? It’s hard to know. But if the worst came to pass, it would be nice if we didn’t have to look back and say, ‘Oh, we could have done a little more.’