Professor Hood's research interests include the critical examination and development of specific urban landscape typologies for the American city. Together they reflect and reinforce specific cultural, environmental, and physical complexities of the city and neighborhood landscape. Through his teaching, writing, and practice Hood advocates the art of "Improvisation" as a design process for making urban landscapes and architecture. 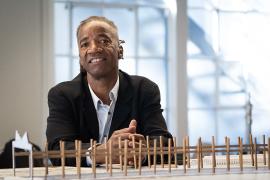 It’s not every day that Walter Hood gets to go by the name “genius.” But today (Wednesday, Sept. 25) is that day: Hood, a UC Berkeley professor of landscape architecture and of environmental planning and urban design, was just named a 2019 fellow of the MacArthur Foundation, which is awarding him what’s known colloquially as a “genius” grant.

It’s not every day that Walter Hood gets to go by the name “genius.” But today (Wednesday, Sept. 25) is that day: Hood, a UC Berkeley professor of landscape architecture and of environmental planning and urban design, was just named a 2019 fellow of the MacArthur Foundation, which is awarding him what’s known colloquially as a “genius” grant.

Please note: The views and opinions expressed in these articles are those of the authors and do not necessarily reflect the official policy or positions of UC Berkeley.
October 8, 2019

New York Times
Gabe Cohn
Hot on the heels of his 2019 MacArthur Fellowship award, landscape architecture and environmental planning and urban design professor Walter Hood has now been awarded the Dorothy and Lillian Gish Prize. The prize, which includes a cash award of $250,000, honors a "highly accomplished artist from any discipline who has pushed the boundaries of an art form, contributed to social change and paved the way for the next generation." The founder and creative director of Hood Design Studio, Professor Hood has designed many culturally significant landscapes in public spaces nationwide, including Lafayette Square Park in Oakland, the environs of the de Young Museum in San Francisco's Golden Gate Park, and numerous museums. He's currently working on the landscaping of the planned International African American Museum in Charleston, S.C. "I tend to call my practice a cultural practice," he says. "I want the work to speak to the broadest public. It's really fantastic to be recognized, and looking at the esteemed winners -- to be part of that collection is pretty mind blowing." For more on Professor Hood, see our recent story about his MacArthur Fellowship at Berkeley News. Another story on Gish Prize appeared in ArtForum.
FullStory (*requires registration)

NPR
Ari Shapiro
Interviewed after winning one of this year's MacArthur Fellowships, landscape architecture and environmental planning and urban design professor Walter Hood, founder and creative director of Hood Design Studio, credits his childhood experience of his grandmother's remote home in North Carolina for the work he does today. "It didn't have toilets," he says. "You know, it had an outhouse, but there was always room in her house, food, and everything was about the land. ... I think those memories now shape kind of everything I think about." The MacArthur Foundation recognized Professor Hood for the many public spaces, often in underserved neighborhoods, that he's transformed in creative and culturally commemorative ways. Talking about some of those projects, he describes their planning process as one that involved the communities and used their input to develop a narrative or story to inform the design, including memories of the space's past, and then finding a path to the site's desired future. Referring to one of his current projects -- the International African American Museum in Charleston, S.C. -- he says: "You know, [in Charleston], I'm dealing with, like, the history of slavery. I'm dealing with the swamps, the memory of wetlands. I'm dealing with Gullah Geechee, you know. So there's just this -- I'm dealing with the Confederacy, you know what I mean?" Link to audio. For more on his award, see our story at Berkeley News. Stories on this topic have appeared in more than 200 sources.
FullStory

Los Angeles Times
Deborah Vankin
Landscape architecture and environmental planning and urban design professor Walter Hood has won a 2019 MacArthur Fellowship. According to the John D. and Catherine T. MacArthur Foundation's announcement Wednesday, he is being honored for "creating ecologically sustainable urban spaces that resonate with and enrich the lives of current residents while also honoring communal histories." The founder of Hood Design Studio, he has designed many culturally significant landscaping in public spaces nationwide. For the International African American Museum in Charleston, S.C., for example, he designed "ancestral gardens" partially inspired by "hush harbors," where slaves had gathered in secret to share and practice their religions and traditions. His MacArthur award comes with a $625,000 stipend to fund new creative and intellectual projects, no-strings-attached. "At first I thought it was a gag -- really?!" he says. "I was floored. I walked around in a daze. I still am." Stories on this topic appeared in more than 200 sources, including the Washington Post (AP), New York Times, Mercury News, San Francisco Chronicle, Time Magazine, Chicago Tribune, and California EPeak.
FullStory (*requires registration)