The general goal is to determine how cytoplasmic and organellar Ca, pH and redox properties contribute to physiology and pathophysiology of secretory epithelial cells.

The Cystic Fibrosis Transmembrane conductance Regulator (CFTR) is a Cl and HCO3 channel located in the apical membrane of trachea and other secretory and absorptive epithelia. The genetic disease cystic fibrosis (CF) is caused by mutations in CFTR that lead to reduced function of CFTR, resulting in altered luminal ionic milieu, accumulation of viscous mucus with altered biochemical properties, reduced activities of anti-bacterial products secreted by epithelial cells and accumulation of bacteria and neutrophils in affected tissues.

Patch clamp and transepithelial electrophysiology are used to investigate the Cl and HCO3 permeability properties of the CFTR channel, which is key to determining the secretory and absorptive properties of epithelial cells in the lung airways. Digital imaging microscopy is used to test the potential role of CFTR and other ion transport pathways in the key ability of the airway epithelial cells to secrete H+ and HCO3- into the airway surface liquid. We use molecular, biochemical and immunomicroscopic methods to identify and then determine the cellular and membrane location of these transporters.

To test the hypothesis that CFTR controls processing and trafficking functions of endosomes, Golgi, TGN and mucus secretory granules through effects on pH or redox potential of the organelles, we use digital imaging microscopy and genetic targeting of green fluorescent protein (GFP) and organic fluorescent dyes to determine how the channel affects the pH and redox regulatory properties of organelles in intact, living cells.

Using imaging microscopy combined with molecular, biochemical and immunomicroscopy methods we are characterizing the interactions between epithelial cells and bacteria in an attempt to determine the early events that precede inflammatory events like invasion by neutrophils. One of the key events in CF and other inflammatory diseases is that bacteria that accumulate in the airways induce neutrophils to migrate from the capillaries across the epithelial surface and into the airway lumen to attack the foreign invaders. The epithelilal cells help orchestrate this event. We are testing the hypothesis that bacteria (and particular gene products of the bacteria) stimulate the epithelial cells by activating receptors that lead to alterations in [Ca] and cyotsolic redox and other signaling pathways and activation of multiple epithelial genes that are involved in the inflammatory and hypersecretion responses characteristic of the diseased state. 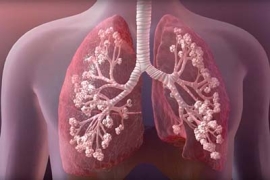 Researchers exploring the effects of a long-standing treatment for cystic fibrosis have discovered a potential new target for drugs to treat the disease, which has no cure and typically cuts decades off the lives of patients.

Researchers exploring the effects of a long-standing treatment for cystic fibrosis have discovered a potential new target for drugs to treat the disease, which has no cure and typically cuts decades off the lives of patients.
Loading Class list ...
.