Severin Borenstein is E.T. Grether Professor of Business Administration and Public Policy at the Haas School of Business and Faculty Director of the Energy Institute at Haas.  He is also Director emeritus of the University of California Energy Institute (1994-2014).   He received his A.B. from U.C. Berkeley and Ph.D. in Economics from M.I.T.  His research focuses on business competition, strategy, and regulation.  He has published extensively on the airline industry, the oil and gasoline industries, and electricity markets.  His current research projects include the economics of renewable energy, economic policies for reducing greenhouse gases, alternative models of retail electricity pricing, and competitive dynamics in the airline industry.  Borenstein is also a research associate of the National Bureau of Economic Research in Cambridge, MA. He served on the Board of Governors of the California Power Exchange from 1997 to 2003. During 1999-2000, he was a member of the California Attorney General's Gasoline Price Task Force.  In 2010-11, Borenstein was a member of U.S. Secretary of Transportation Ray LaHood's Future of Aviation Advisory Committee.  In 2012-13, he served on the Emissions Market Assessment Committee, which advised the California Air Resources Board on the operation of California’s Cap and Trade market for greenhouse gases.  In 2014, he was appointed to the California Energy Commission’s Petroleum Market Advisory Committee, which he chaired from 2015 until the Committee was dissolved in 2017.  Since 2015, he has served on the Advisory Council of the Bay Area Air Quality Management District. In 2019, he was appointed to the Governing Board of the California Independent System Operator. 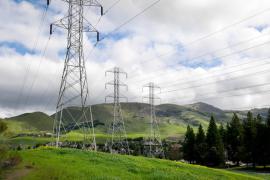 Report: Californians pay up to triple what it costs to provide electricity

Californians not only pay some of the highest electricity rates in the country, but they pay two-to-three-times more for power than it costs to provide, according to a new report by researchers at the Energy Institute at Haas and the non-profit think tank Next 10.

Report: Californians pay up to triple what it costs to provide electricity
See all

Report: Californians pay up to triple what it costs to provide electricity

Californians not only pay some of the highest electricity rates in the country, but they pay two-to-three-times more for power than it costs to provide, according to a new report by researchers at the Energy Institute at Haas and the non-profit think tank Next 10.

Please note: The views and opinions expressed in these articles are those of the authors and do not necessarily reflect the official policy or positions of UC Berkeley.
February 23, 2021

San Francisco Chronicle
J.D. Morris
California's electricity prices are growing so high that they threaten the state's ability to convince enough people to ditch fossil fuel-powered cars and appliances, new research says. The state's electric rates are now two to three times what it costs to provide power, a paper released by the energy institute at UC Berkeley's Haas School of Business and the nonprofit think tank Next 10 reported. Severin Borenstein, a UC Berkeley energy economist who spearheaded the paper, said he's concerned that California is saddling its electric rates with too many things that are divorced from the direct cost of powering homes and businesses. The state could end up in a situation where electric rates are "vastly higher than the true cost of using electricity," Borenstein said. "At the same time, we're going to have rates that are going to be so high that it will be a huge discouragement to using electricity for things that we need people to adopt if we're going to decarbonize the economy."
FullStory (*requires registration)

US News & World Report
Associated Press
As if the pandemic and economic recession weren't bad enough, millions of Californians now face recurring threats of abrupt blackouts during a heat wave in the nation's most populous state. UC Berkeley professors Daniel Kammen and Severin Borenstein discuss the state's problems with managing and storing power, and the complications of climate change and the pandemic.
FullStory