Rauri Bowie is a Professor in the Department of Integrative Biology and a Curator in the Museum of Vertebrate Zoology. He is fascinated by why animals are distributed unevenly around the globe. Much of his research has centered on documenting and studying patterns of species diversity and distribution across heterogeneous landscapes, particularly those inherent to mountains, arid savannas, and rocky shores. His research group combines field, museum, and genomic approaches to: (1) document and delineate biological diversity; (2) determine the underling basis of convergent evolution of phenotypes; and to (3) characterize the microbiota of vertebrates and determine their role in disease transmission and metabolism. In the course of the labs research, they apply phylogenetic, population genetic and genomic approaches, working with datasets overlaid with analyses of acoustic and trait variation, and species distribution models to examine spatial and temporal patterns of diversification. The labs research is conceptually as well as geographically broad and addresses multiple fundamental questions in evolutionary biology. The bulk of the labs research takes place in Western North America and Africa, but over the past decade has expanded to other continents to ask questions about the global diversification of animals and their associated microbes. 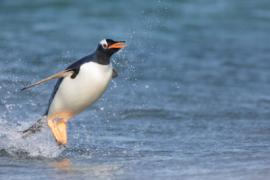 Penguins are Aussies. Or are they Kiwis?

From the four-foot-tall emperor penguin to the aptly named foot-long little penguin, these unique flightless birds have invaded habitats from Antarctica to the equator, not to mention the hearts of the public.

Penguins are Aussies. Or are they Kiwis?
See all

Penguins are Aussies. Or are they Kiwis?

From the four-foot-tall emperor penguin to the aptly named foot-long little penguin, these unique flightless birds have invaded habitats from Antarctica to the equator, not to mention the hearts of the public.

Please note: The views and opinions expressed in these articles are those of the authors and do not necessarily reflect the official policy or positions of UC Berkeley.
August 18, 2020

Where Did Penguins Come From? Scientists Say It's Not Antarctica

NPR
All Things Considered
Thanks to genetic evidence collected from 18 species of penguins, it's now known that penguins did not evolve in the frigid climes of Antarctica, but arose in the cool coastal regions of Australia and New Zealand. Rauri Bowie, professor of integrative biology at the University of California, Berkeley, and curator in the Berkeley Museum of Vertebrate Zoology notes that penguins evolved over 22 million years to colonize a wide variety of habitats and extreme climactic differences, but will unlikely be able to adapt to the more rapid climate change happening today. For more on this, see our press release at Berkeley News. Stories on this topic have appeared in several sources, including CNN, Phys.org, Iowa Public Radio, and 24News.ca.
FullStory