The laws of quantum mechanics and those governing gravity seem incompatible, and will likely turn out to arise as limiting cases of a more fundamental theory. My research seeks to identify features of this elusive unified description of nature. String theory, in its present form, may be part of this description, and I continue to explore its structure.

Because string theory is difficult to apply to a realistic universe, it is important to extract key properties of quantum gravity that hold even in cases where string theory is presently inapplicable or intractable. This includes semiclassical results such as the quantum properties of black holes. More broadly, much evidence points to a surprisingly strong and counterintuitive relation between quantum-mechanical information and the geometry of spacetime, which has been recognized over the last decade.

The most general such relation currently known is the covariant entropy bound. This conjecture states that the area of spatial surfaces always exceeds the entropy of the matter present in adjacent spacetime regions. (The main content of this statement lies in the definition of "adjacent", which can be found in the references below.) This motivates the "holographic principle", which asserts that geometry and its matter content must arise from an underlying theory in such a way that this otherwise mysterious bound on entropy is guaranteed to hold from the start. Nowhere has this principle been realized more explicitly than in string theory (in the celebrated AdS/CFT correspondence), but it appears to apply in a far broader regime than what can currently be addressed by string theory.

Joe Polchinski and I have proposed an explanation of the mysterious accelerated expansion of the universe that has recently been observed. We showed that string theory predicts an enormous universe containing diverse regions (each still larger than the observed universe), including regions with the right amount of the "dark energy" to account for the above observations. Thus, what we think of as physical laws and constants of nature may be only one among many possibilities realized in what is now called the "string theory landscape".

In order to make predictions in this framework, it is important to begin mapping out the landscape (though it is not obvious that we already understand string theory well enough to get a representative sample). But it is also crucial to understand whether, and how, cosmological expansion in the early universe affects the probabilities for different kinds of low energy physics. This is related to an old and notoriously tricky question of how to define relative probabilities in an infinite, ever expanding universe.

I am interested in understanding which known (or strongly believed) laws of physics can be regarded as consequences of the holographic principle. By identifying such implications one can hope to anticipate in more detail the manner in which familiar physics may arise from a more fundamental quantum gravity theory. In particular, I am exploring the so-called Bekenstein bound, which appears to relate to the emergence of non-gravitational physics. The question is whether it admits a sharp formulation, and if so, how it constrains physical laws.

I am also studying various aspects of the problem mentioned above: how to define the probabilities in the landscape of string theory. 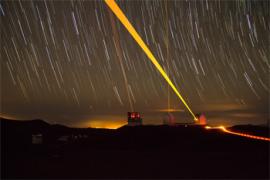 Two University of California, Berkeley, scientists have received research grants to explore areas of science that bleed into science fiction.

Two University of California, Berkeley, scientists have received research grants to explore areas of science that bleed into science fiction.