Compared to other animals, humans are unique in their linguistic, cognitive, and social abilities. Broadly speaking, the Language and Cognitive Development Lab (CDL) explores how these abilities develop and interact in children, as a way of addressing the question of what makes humans special. Below are three themes currently being pursued in the CDL:

Flexibility in Language and Thought. One focus of their research is on what children’s early use of language reveals about how we structure our ideas. To this end, their lab explores children’s ability to use words flexibly. Flexibility is widespread in language, and for example, is evident in our use of words for space to describe time (“Christmas is approaching”), words for animals to describe the meat derived from those animals (“The chicken is salty”), and words for artifacts to describe functional uses of those artifacts (“She shoveled the snow”). Their research indicates that, from early in life, children expect language to be used flexibly, and that this may reflect the basic ways in which children understand and construe the world. Consistent with this, they have found striking parallels with respect to flexibility across languages, suggesting that flexibility may reveal universal cognitive biases. Their ongoing research explores whether learning to use language flexibly may shape cognition, and whether variation in flexibility across languages results in cognitive differences among speakers of different languages.

Pragmatics and Language Development. A second focus of their research is to explore how linguistic development relates to children’s developing ability to reason pragmatically about the knowledge and intentions of others. Everyday language is replete with examples in which the meaning we derive from an utterance goes beyond what the utterance itself literally entails. Thus, if we ask a friend if they want to come to our party and they reply that they “have homework to do”, we may infer that they do not want to come to the party, even though they have not said so. Further, an ability to understand others’ intentions and goals may also be critical to even the most basic inferences that children make about the  meanings of new words. However, a great deal of research has indicated that children under the age of four struggle to understand the mental states of others, and especially to realize that other people can have different beliefs about the world than they do. Their research explores this tension, with the goal of clarifying how children’s language development may depend upon their developing social cognitive abilities.

Social Cognitive Development in Different Cultural Contexts. In recent years, scientists have begun to elucidate the foundations of the basic human tendencies to form biases toward different social groups, to cooperate and help others, and to make moral judgments. However, this research has been conducted primarily in western, industrialized societies, leaving open how variation across different cultures may shape these basic tendencies. In recent work, their lab has explored some of these questions in urban India, examining the implications for social cognitive development posed by unique cultural constructs such as the Hindu caste system. Their research considers the role of culture in shaping our social identities and dispositions. 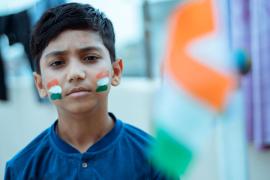 With a multi-faith population of some 1.3 billion, India claims to be the world’s largest secular democracy. But when it comes to the question of who is a true Indian, the country’s Hindu children are more likely than their Muslim peers to connect their faith to their national identity, according to new research from UC Berkeley.

With a multi-faith population of some 1.3 billion, India claims to be the world’s largest secular democracy. But when it comes to the question of who is a true Indian, the country’s Hindu children are more likely than their Muslim peers to connect their faith to their national identity, according to new research from UC Berkeley.

Please note: The views and opinions expressed in these articles are those of the authors and do not necessarily reflect the official policy or positions of UC Berkeley.
November 18, 2019

India Today
Indo-Asian News Service
Seeking to understand how rising Hindu nationalism might be affecting Hindu and Muslim children in India, a team of Berkeley and Yale psychologists found that Hindu children were significantly more likely than Muslim children to correlate their religion with their nationality. "Our results indicate that by age 9, Hindu children have already internalised an 'Indian equals Hindu' association, and we show that this association predicts children's support for policies that favor Hindus over Muslims," says associate psychology professor Mahesh Srinivasan, the study's senior author. "If Muslim children were to equate being Indian with being Hindu, they could very well feel conflicted about being Indian or being Muslim. We know from other research that disconnection from one's own national, ethnic, or religious group is bad for mental health and other life outcomes," he added. For more on this, see our press release at Berkeley News. Stories on this topic have appeared in dozens of sources around the world, including India West, Hans India, India Link (Australia), Indica News, Siasat Daily, and the Millenium Post.
FullStory